This is not the first time that CLAMP’s sci-fi manga has been given an all-in-one release. The four-volume series was originally released as a single omnibus edition by Dark Horse back in 2009, when CLAMP were celebrating their 20th anniversary together. The group has now been together for 31 years, and Kodansha have continued to re-release their works in ever more high-quality and high-price editions.

Kodansha’s release has a RRP of £30, but it is easy to see why. Not only is it released in hardback, while Dark Horse’s version was in paperback, but Kodansha’s “Collector’s Edition” is in A4 paper size. It is also the first fully completed title Kodansha have released in their recent “CLAMP Collector’s Edition” drive. The second half of Magic Knight Rayearth comes out in October, their Cardcaptor Sakura releases are still a work in progress, and their Chobits release has only just started. Fortunately, you always have the option of the e-books for those who find themselves lacking in both cash and space on their bookshelves. Clover does stand out from these other releases however in two key aspects: its grimmer tone and slimmed-down art.

Clover is their most science fiction-like work in terms of what traditional sci-fi is like. X was originally set in the near future although it ultimately became the past by the time the series stopped; Chobits covers technology, Rayearth and Tsubasa deal with multiple dimensions of various kinds, and comedically Duklyon features aliens; but Clover has a darker, cyberpunk setting. Or at least, most critics describe it as cyberpunk. The genre of cyberpunk is normally set in the near future, but no dates are given in the story. We don’t know the name of the location the main action is set in either. Also, much of the technology in the world of Clover has the appearance of brass and is more mechanical than the more internet-like settings of traditional cyberpunk. The appearance of the tech feels more steampunk than cyberpunk at times.

The story begins with a man named Kazuhiko Fay Ryu, a former soldier in what appears to be a militaristic nation controlled by five generals or “wizards”. One of these, an elderly woman named General Ko, gives Kazuhiko the job of delivering something. She gives him a code on his hand in the shape of the leaf, and when he uses it to find his package, he discovers that he is not delivering something but someone, a girl named Su. Su’s name comes from the Chinese word “sì”, meaning “four”.

With the help of his friends, military commander Gingetsu and young boy Ran, Kazuhiko tries to teleport Su to her desired destination, but the process of teleporting is interrupted by forces from an enemy nation. It becomes clear that several people are after Su. After one battle, Su helps Kazuhiko to escape the fighting by growing a pair of wings and allowing both of them to fly to safety out of a tall building.

Eventually Kazuhiko comes to realise that Su is a “Clover”. His country’s government ran the “Clover Leaf Project”, a 10-year-long plan to find children with great magical ability. One-leaf Clovers are the weakest. We learn that Gingetsu is a 2-leaf and Ran is a 3-leaf Clover. Su however is a 4-leaf Clover, the most powerful of all, the only one of her kind, and one that could overpower the wizard-like generals. Things become more personal for Kazuhiko however due to Su constantly singing a song called “Clover”, which she co-wrote with a singer called Ora. The song is widely seen performed on TV screens, but Ora died some time ago. Ora also happened to be the woman that Kazuhiko loved.

Clover is a story in three parts. The first is the initial tale of Kazuhiko and Su meeting, and trying to get Su to the destination that she most wants to visit. The second tells of Kazuhiko’s love of Ora, how Su and Ora came to write their song, and of Ora’s death. The third is of Ran’s origins as a 3-leaf Clover, how he met Gingetsu, and the problems encountered with another 3-leaf Clover. The fourth and final part… never got made. Clover was created for the short-lived magazine Amie which attempted to release more experimental shojo manga, with Clover being the main title in the publication. However, the magazine ended up ceasing publication two years after launch. As a result, Clover remains incomplete.

It was not the first time CLAMP found themselves in a situation where one of their titles ended early due to the magazine hosting them closing down. In 1994, their Korean fantasy series The Legend of Chun Hyang ended after the series released just three chapters, collected in just one tankobon. However, there is a key difference in the way Chun Hyang and Clover were made, in that the latter is arguably the most minimalist of all of CLAMP’s series. While Chun Hyang contained just three huge chapters that were released between 1992 and 1994, Clover meanwhile had chapters that were sometimes just one page long. Not only that, but while many of CLAMP’s works have greatly detailed backgrounds, much of Clover doesn’t bother with backgrounds at all. The two most common backgrounds you see in Clover are plain white and plain black.

This minimalism demonstrates the experimental side of CLAMP. Some series, including parts of Chun Hyang, use traditional brush paintwork to make them. In Clover, they kept everything as simple as possible. Sometimes a page will consist of nothing except one tiny sketch and one speech bubble. The closest that comes to this in CLAMP’s canon would be the covers for X, which had nothing except a massive “X” on a black background, with some extra bits of info like the volume number and the name of the publisher. X has another connection to Clover, in that X also ended early. It seems strange that both sci-fi works should remain unfinished, as if CLAMP feel that they cannot complete the story as they don’t know what is to come in the future.

The artwork feels better than the plot in Clover. The minimalism means that there is often not much time given to explaining the story in great detail, as is demonstrated by the lack of information given to the setting. You have to use the art to tell you much of the story. The fact that the story ended early also means that we will most likely never find out what truly happens in this tale, but each of the three completed parts stand fine as individual stories.

There are some obvious differences in the translation between the Dark Horse and Kodansha releases. For example, in the Dark Horse version Su is called “Sue”. It appears that her actual name is spelt “Sū”, but the accent was omitted in Ray Yoshimoto and Karen McGillicuddy’s translation. However, what interests me more is the lettering used by Scott O. Brown. For the main body of the text, Brown ditches the traditional comic sans font for something plainer and more simplistic. I’m not sure what font it is, but it stands well with the overall minimalist feel of Clover as a whole. [EDIT: Since learned the font is CC Credit Crunch Soft].

Clover is a reminder of CLAMP’s diversity. The people who brought us the catastrophic and apocalyptic X, and the childlike and sweet Cardcaptor Sakura, are also capable of making stories that are simplistic and resort to using little to explain themselves, but are still engaging. It is just a shame that it ended so soon. 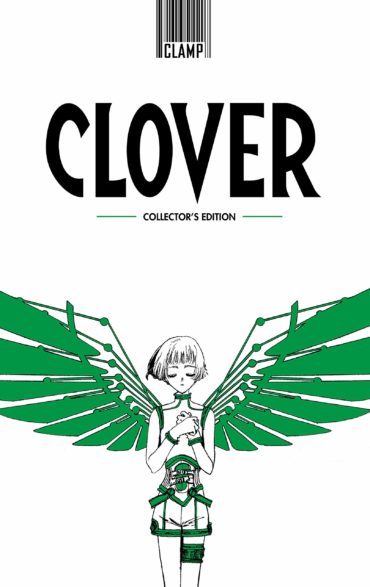