In the second of these collections of Yukito Kishiro’s classic cyberpunk manga, we see our central heroine taking her own clear path and forging her name in a new field.

When we last saw her (in what is actually the middle of Volume 2 of the original nine tankobon editions, due to Kodansha’s decision to release this series in six volumes) the cyborg Alita, who works as a Hunter-Warrior (bounty hunter) is trying to search for a missing boy named Yugo, with whom she has fallen in love. Yugo has been trying to collect body parts in the hope of selling them to raise enough money to leave the slums of the Scrapyard, and travel to the glorious space-city Zalem which is directly above them.

However, there are other Hunter-Warriors out there who are also trying to reach Yugo and kill him for the bounty on his head. Yugo’s injuries are so great that the only way Alita can keep him alive is by cutting off his head and attaching it to her life-support systems. She is able to keep the brain alive for long enough to get him to the man who revived her, Dr. Daisuke Ido, who turns Yugo into a cyborg. However, Yugo’s betrayed dreams of going to Zalem ultimately lead to his ruin.

Following this terrible incident, Alita leaves Ido. One month later and Ido is still trying to find her, and finally does so in an unexpected place. Alita is no longer a Hunter-Warrior and has taken a new career path entirely, into the world of sport. Alita is now a participant in the violent game of Motorball, where various robotic and cyborg players fight each other in a rollercoaster-like course. Alita’s use of her Panzerkunst martial art skills make her a top player at her level and she finds herself climbing the ranks. However, she has no interest in returning to Ido, so he tries to get close by joining the team of the No. 1 Motorballer on the circuit, Jasugun.

The most interesting part in this second collection is the change in direction of the plot. In the first part, the stories are primarily about hunting down criminals and bringing people to justice, but after Alita goes through the love and loss of Yugo, it suddenly becomes a sports manga, albeit about a sport that is entirely fictional. However, the shift in plot does not overdramatically change the tone of the story.

There is still plenty of action and fighting in these new chapters, but rather than fighting over criminals, the fighting is the arena, with the competitors still all tooled up to beat each other into a pile of bolts in order to get the full prize. It is best summed in the words of George Orwell in his 1945 essay The Sporting Spirit: “Serious sport has nothing to do with fair play. It is bound up with hatred, jealousy, boastfulness, disregard for all rules and sadistic pleasure in witnessing violence: in other words it is war minus the shooting.” Shooting seems to be the one violent act not yet depicted in Motorball, but there are plenty of other weapons to fight with instead, with Alita herself armed with a pair of blades as shown on this collection’s front cover.

As for the production, the notes squeezed in-between panels in tiny text are still a frustrating feature, but there are more translation notes in general. While most of Stephen Paul’s translation itself is fine, if you are happy with all of the changes made between this and original released under the title of Gunnm, the various fonts user by letterers Scott O. Brown and Evan Hayden are still the best part of the production.

The introduction of Motorball and the change in the relationship between Alita and Ido have made this second volume of the new edition an improvement on the first, and hopefully will create more intrigue as the story progresses. 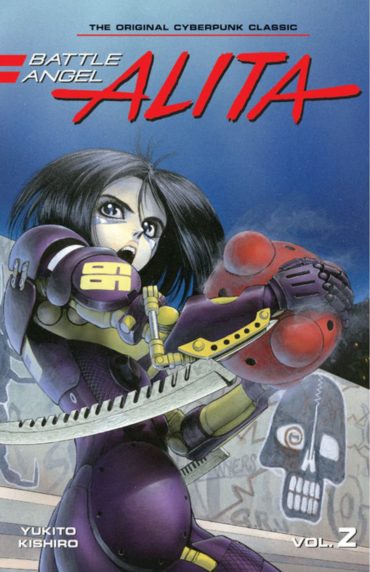