2019 ended with the release of Katanagatari omnibus Volume 3 and now, more than halfway through 2020, the final omnibus collection is in our hands! This set brings the ‘sword tale’ to an end, but is it an ending befitting this impressive series? Let’s find out!

Like the previous omnibus collections, this release includes three instalments of the light novel series, Volumes 10-12. The tenth book kicks off with heroes Shichika and Togame heading to Togame’s deserted homeland, chasing after Seito the Garland, a sword owned by Rinne Higaki who is a Hermit Magus.

Being a Hermit Magus means Higaki takes on the appearance of someone close to whoever’s looking at her. For Shichika, this means she takes on the appearance of his sister Nanami, while for Togame – Higaki looks like her father. Luckily Higaki has no intention of fighting our heroes over the sword, but she reveals she buried it somewhere nearby and Togame will have to go dig it up without Shichika’s help.

In the eleventh book, our heroes are chasing after the final two swords as they ponder what they’ll do after their hunt is complete. A large portion of this light novel is dedicated to recapping the story so far and who all of the main characters are, so until halfway through, very little happens.

The twelfth and final book sees Shichika embark on a suicide mission to destroy the twelve swords he and Togame collected. Having been betrayed by someone close to them, Shichika is filled with rage and a desire to bring Princess Hitei (who Togame was working for) crashing down. How will it all end? Well, you’ll have to read the book to find out, but believe me when I say it’s a satisfying conclusion.

Unfortunately, while the final book is a satisfying read, the same can’t be said for the omnibus itself. Volume 10 is an okay read but doesn’t have quite the same impact as many of the other entries in the series so far. Meanwhile, Volume 11 is simply confusing because anyone who has read this far into the series surely needs no recap on what’s been happening or who everyone is.

It feels like author NISIOISIN began running out of ideas a few books short, which is perhaps understandable given the tight deadlines and ambitious project he set himself. In the end, none of his stories was poorly written or boring, so I’m certainly not unhappy with any of the content. It’s a shame that he so obviously started struggling, but that’s not enough to taint the rest of the series for me.

Katanagatari has been a thrilling journey where you never know quite what to expect from book to book. These omnibus releases from Vertical have been a tremendous way to experience the series too. Perhaps more than that, it’s also incredibly satisfying to see one of NISIOISIN’s series through to the end, since the majority of his works available in English are still on-going (for example Monogatari and Zaregoto).

Of course, illustrator take also deserves praise for their hard work on the series. We’ve seen take work with NISIOISIN before on the Zaregoto series, but I think their artwork works a lot better with Katanagatari. It’s a very comical, almost comic book style that has reflected the light-hearted nature of the text throughout the run of the books.

As previously mentioned Katanagatari comes to the West thanks to Vertical and has been translated by Sam Bett. Throughout these four omnibus releases, Bett has done a fantastic job translating the series and has also provided extensive footnotes. In these footnotes Bett has chosen three or four words on a page and detailed the original kanji with a literal translation, giving us a glimpse at the thoughts behind the way Bett reflected them in the finished text.

Overall, the final instalment of Katanagatari proves a fitting conclusion to this weird and wonderful tale. Although it feels like NISIOISIN was struggling to come up with ideas for Volumes 10 and 11, I think the strength of the ending is enough to make up for that. If you’re a fan of the author’s work then you’ll certainly want this whole series in your collection! 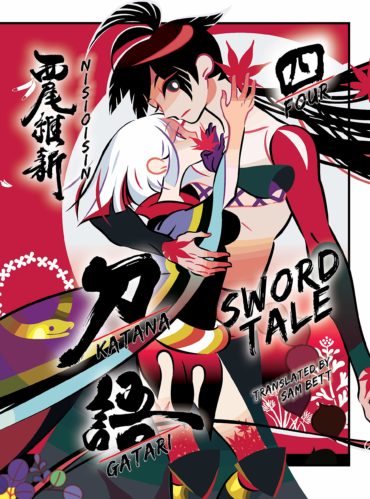