At the beginning of the year, Vertical started publishing the final season of Owarimonogatari. Now Part 3 is here, which brings us the conclusion to this fascinating collection of stories. While this certainly isn’t the end of Monogatari itself (there are still plenty of books to come!) it’s still time for Araragi and co. to face an end of sorts…

The story picks up straight after the conclusion of Owarimonogatari Part 2, with Araragi going up to Kitashirahebi Shrine to pray before taking his college entrance exam. There he is suddenly cut down by Gaen Izuko and awakens to find himself in Hell and facing Hachikuji, which is an emotional reunion for both our hero and us readers.

Of course, Araragi isn’t destined to stay in Hell and Hachikuji just happens to be there to guide him back to the real world. Together the two discuss if there is anything Araragi regrets or would have done differently if he could relive the days since he became intertwined with Shinobu, although of course Araragi regrets nothing and would change nothing. That’s just the kind of guy he is.

After his time in Hell, Araragi returns to life and is greeted by Gaen who tells him why she killed him and what she intends to do next. This discussion sets the wheels of fate in motion as everything we’ve been wanting to know is finally revealed. Just who is Ogi? What has Hanekawa been doing all this time? Is there any way to return Araragi to his former human self?

Despite how densely packed this instalment of Monogatari is, it still manages to split into three distinct chapters: the first is Araragi in Hell, the second a date between him and Senjougahara, and then the third wraps everything up neatly. A lot is happening in these three chapters, but to NISIOISIN’s credit, he manages to pull all the strings together neatly in the end.

It has to be said that for a sort-of conclusion to Monogatari, this book captures everything I’ve come to love about the series: the conversational humour, the wacky characters and the mysteries our hero becomes embroiled in; elements of all these can be found in Owarimonogatari Part 3.

Considering how strong an ending the series has, it does make me wonder what’s next. Can anything top this? There are still plenty of subplots to explore within the universe and with the other characters, but as far as things stand with Araragi, his story feels complete. The way NISIOISIN brings his cast together for this book is not all that dissimilar to the end of a long-running shonen, where everyone returns to see the hero off on his final fight or to welcome him home.

I also think that, compared to usual, NISIOISIN manages to better balance the humour and serious storytelling. Where in previous books nothing happened until the end of any given instalment, this time around, all three chapters make notable progress in the story. If nothing else, Chapter 2 also gives both us and the characters a chance to relax and enjoy some cutesy slice-of-life content before being thrown straight back into the chaos of the supernatural stuff.

As previously mentioned Owarimonogatari Part 3 comes to the West thanks to Vertical and has been translated by Ko Ransom. The translation reads well with no issues to speak of. The next book in the series, Zoku Owarimonogatari is currently scheduled for an English release at the end of November.

Overall, even with more to come, I think Owarimonogatari perfectly captures the essence of being a final story. It’s sure to be satisfying for long-time readers and offers NISIOISIN an opportunity to change focus and move on in the franchise. 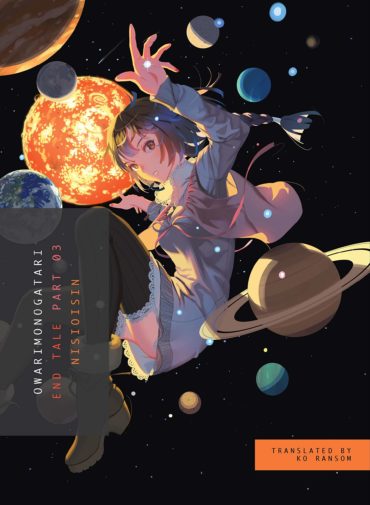