Last month I reviewed Kabukimonogatari and praised it for a somewhat different tale featuring some of my favourite Monogatari characters. With my enthusiasm for the series at an all-time high, I return to take a look at latest entry, Hanamonogatari, to determine if the high quality stories I’ve come to love in this series continue.

This story is told from the perspective of Kanbaru Suruga, who has been left behind in high school after Araragi, Senjougahara and Hanekawa have all graduated and moved on to college. Without her beloved seniors around, Kanbaru is understandably lonely, but life must go on and it’s not long before Kanbaru is swept up in a new incident involving an aberration and her Monkey’s Paw…

Kanbaru hears tell of a “Devil” who will magically solve any problem a person may have; all they need do is talk to her (this “Devil”) and 24 hours later their issues will be resolved. As Kanbaru investigates, she discovers that the person behind all this is her former basketball rival, Rouka Numachi! Initially Kanbaru believes that Rouka is doing nothing more than lying to her customers and deceiving them into believing that she’ll solve their problems. After all, Rouka is only an ordinary girl, right? Kanbaru truly believes this to be the case – that is, until she speaks with Rouka and wakes up the following day to find that her Monkey Paw is gone! Now that her arm has returned to its original human state, Kanbaru must find out just who, or what, Rouka truly is before she harms anyone.

When I discovered that Hanamonogatari was another instalment that’s not told from Araragi’s perspective, I was excited to read it as this approach has worked well for the series in the past. Unfortunately that hasn’t held true for this volume for a few reasons, most notably because Kanbaru does not work in the role of the protagonist. She’s always been one of the characters I’m less attached to but her interactions with Araragi and the other members of the cast are fun to read. The problem is that she’s a sidekick: someone to play off of comedically and act as a self-insert for complicated explanations. On her own, Kanbaru’s personality is quite dull and doesn’t lend itself to the quirky humour I’ve come to expect from NISIOISIN.

The other problem this book has is that the story isn’t that interesting overall. This could again be because I don’t like Kanbaru all that much, but I also didn’t see the point for another story to revolve around her. Although it resolves a fairly big plot point for Kanbaru (her Monkey Paw), it doesn’t feel like it adds anything to the Monogatari universe. In fact, what it does resolve for Kanbaru somehow makes her even less interesting as a character.

While there is nothing wrong with the writing or translation of Hanamonogatari, I found it incredibly difficult to read through without repeatedly putting it down. It just wasn’t clicking with me. I’m not wholly certain if that’s because I was run down with a cold part of the time or if the story just wasn’t that interesting, but I’m heavily leaning towards the latter.

I think your enjoyment of this book will boil down to how much you like Kanbaru. If you’re a huge fan of hers then it’s likely you’ll get on with the story a lot more than I did. However, if you don’t fall into that camp, then be prepared for a lacklustre tale. It’s a huge shame, given how good Monogatari has been lately, but hopefully the next entry will grip me once again.

This book comes to the West thanks to publisher Vertical and has been translated by Daniel Joseph, who also translated the previous entry: Kabukimonogatari. The translation is a smooth read and is once again problem free. This release also has a colour insert page by illustrator VOFAN, which (as always) looks incredible and captures the mysterious atmosphere Monogatari aims for.

Overall Hanamonogatari was a huge disappointment for me coming off the back of some incredible stories in this franchise. The problem with these books changing protagonists is that it’s a double-edged sword. It can either give us some wonderful or lacklustre tales depending on the member of the cast. Kanbaru fans will probably get a lot more out of this book than I did, but I’m just looking forward to the next entry and seeing what’s to come. 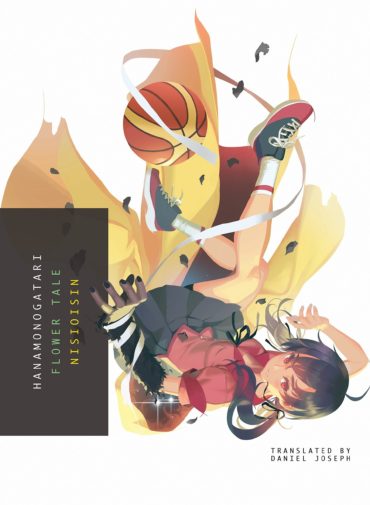