With a gigantic life-size replica of its titular mobile suit standing outside a shopping centre in Tokyo, it’s safe to say that Mobile Suit Gundam Unicorn is one of the most celebrated entries in the Gundam franchise, often being lauded by fans as one of the best. But just what makes it so special? Is it the lore-heavy story that turns the entire Universal Century full circle, or the strong cast of characters filled with promising newcomers and fan-favourites, or is it the blockbuster cinematic production values that could put these OVAs’ action scenes on a par with stuff out of Star Wars? The answer, of course, is all of these. 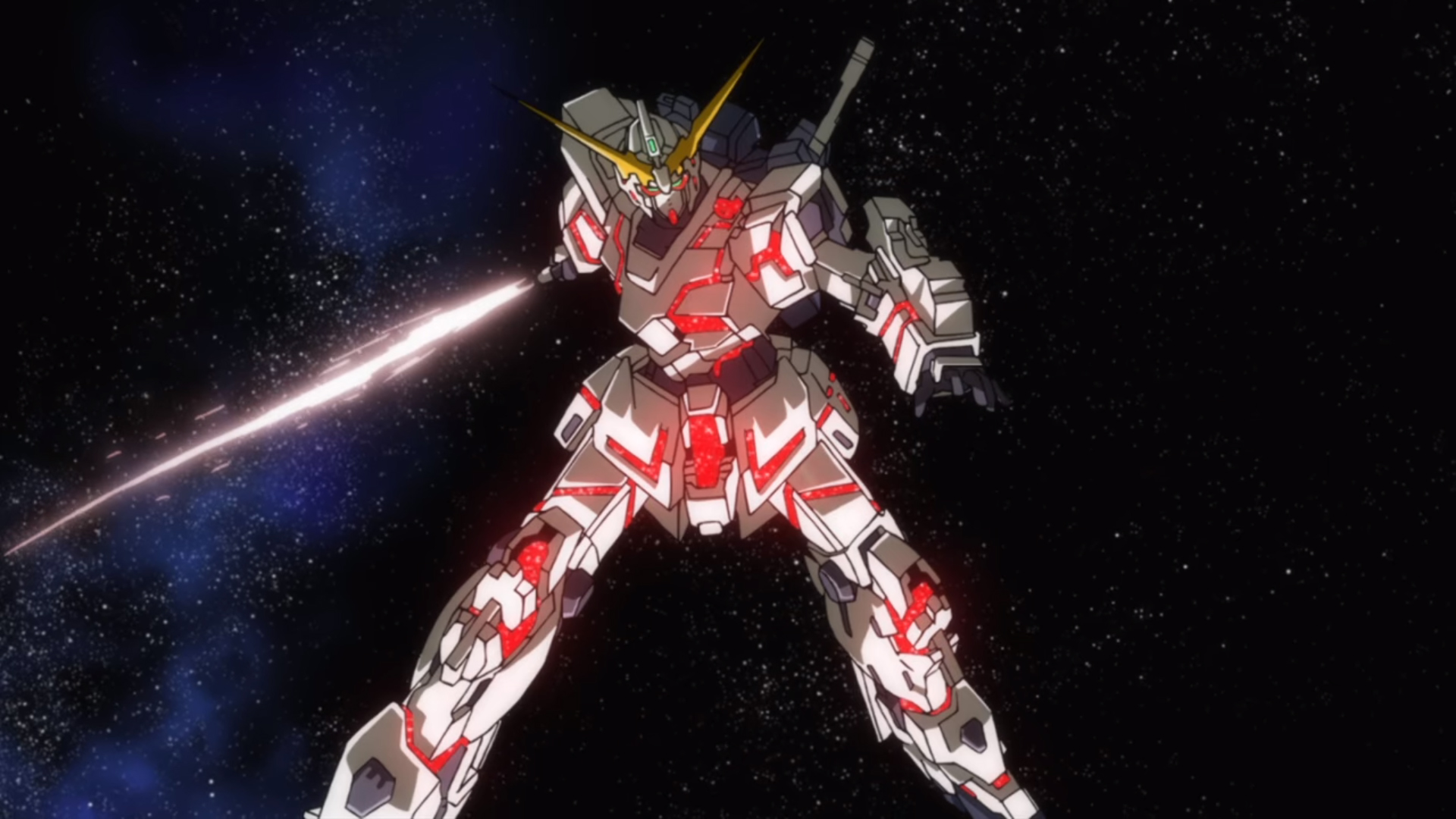 Unicorn’s plot is certainly not for the Gundam newcomer, as it provides a direct sequel to 1988’s Char’s Counterattack and is both full of, and the foundation of, a vast amount of franchise lore. The opening episode sets out the basic outline: in the first year of the Universal Century, the signing of a charter marking the new age was sabotaged by terrorists intent on making sure it was never revealed to the public, as the charter could either present a bright new future for humanity, or destroy it. However, the charter itself was not destroyed, and ended up in the hands of one of the terrorists, Syam Vist.

Nearly a hundred years later, in UC0096, this charter has become known as “Laplace’s Box” and has served as the foundation of the Earth Federation’s power over Zeon and the space-dwelling populations thanks to the political dealings of the Vist Foundation. The Foundation’s current president, Cardeas Vist, has decided to give the box to the remnant Neo Zeo faction known as the Sleeves, but catching wind of his plans, the other Vist family members send Earth Federation forces chasing after the Sleeves’ ship, The Garencieres, to stop the trade. 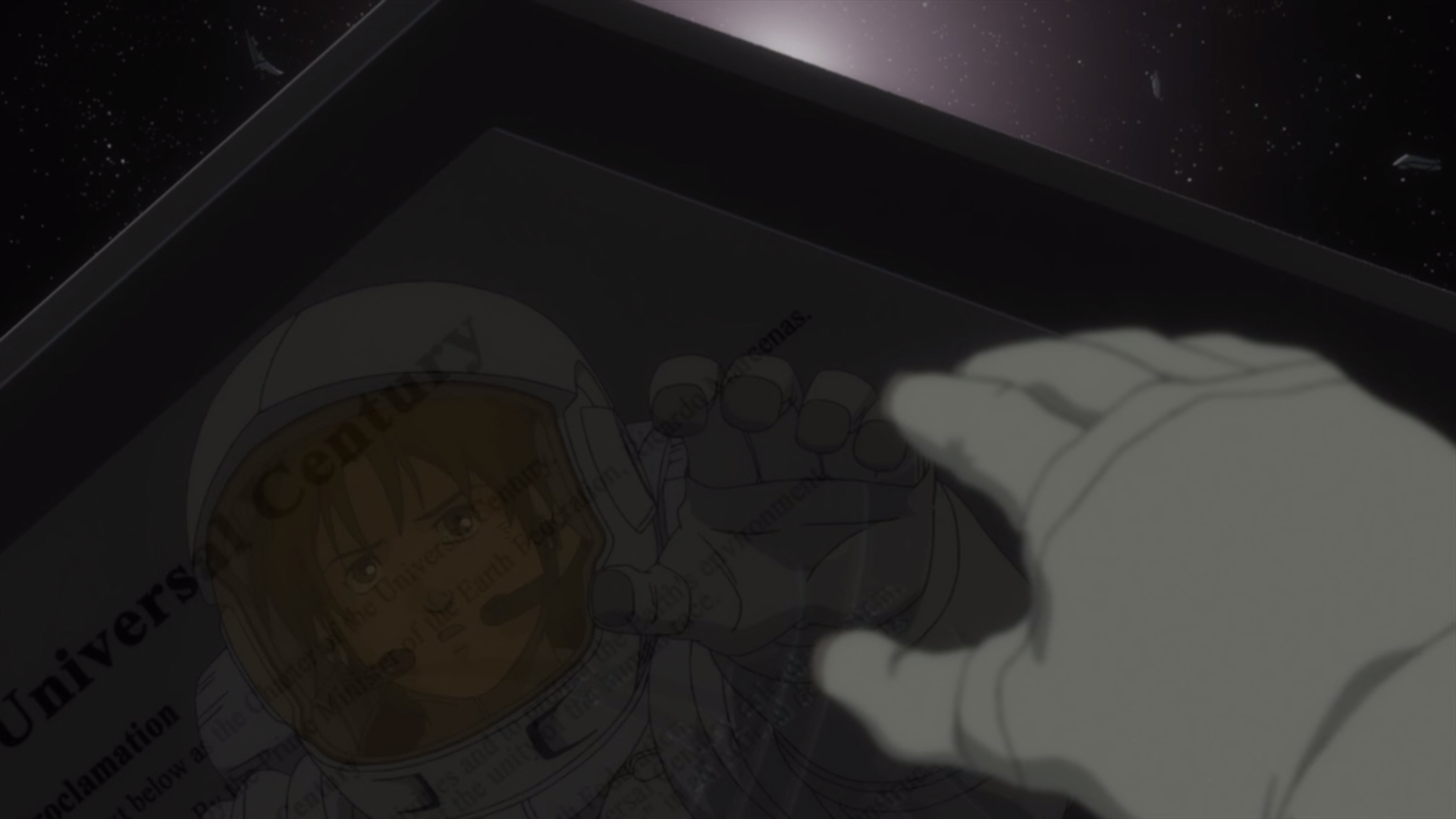 On Industrial 7, the colony where the trade is set to be made, we are introduced to Banagher Links, a student at Anaheim Electronics’ Industrial College. After rescuing a young woman going by the name of Audrey Burne, Banagher is dragged into this affair over the box after he takes her to see Cardeas in order to negotiate against its transfer to the Sleeves, as doing so risks plunging the Earth Sphere into another war. Despite her best efforts, the trade ends up going ahead, but drags in the Earth Federation forces too, turning the colony into a warzone.

Caught up in the chaos, Banagher attempts to rescue Audrey from the fighting, but is instead drawn into a hidden mobile suit bay. Here he finds a wounded Cardeas, who suddenly implores him to take the majestic white Unicorn Gundam in front of him, and follow the path embedded into the suit’s La+ program in order to unlock Laplace’s Box. With no other choice but to get in the robot and join the fight, Banagher sets out in order to uncover the truth about Laplace’s Box. 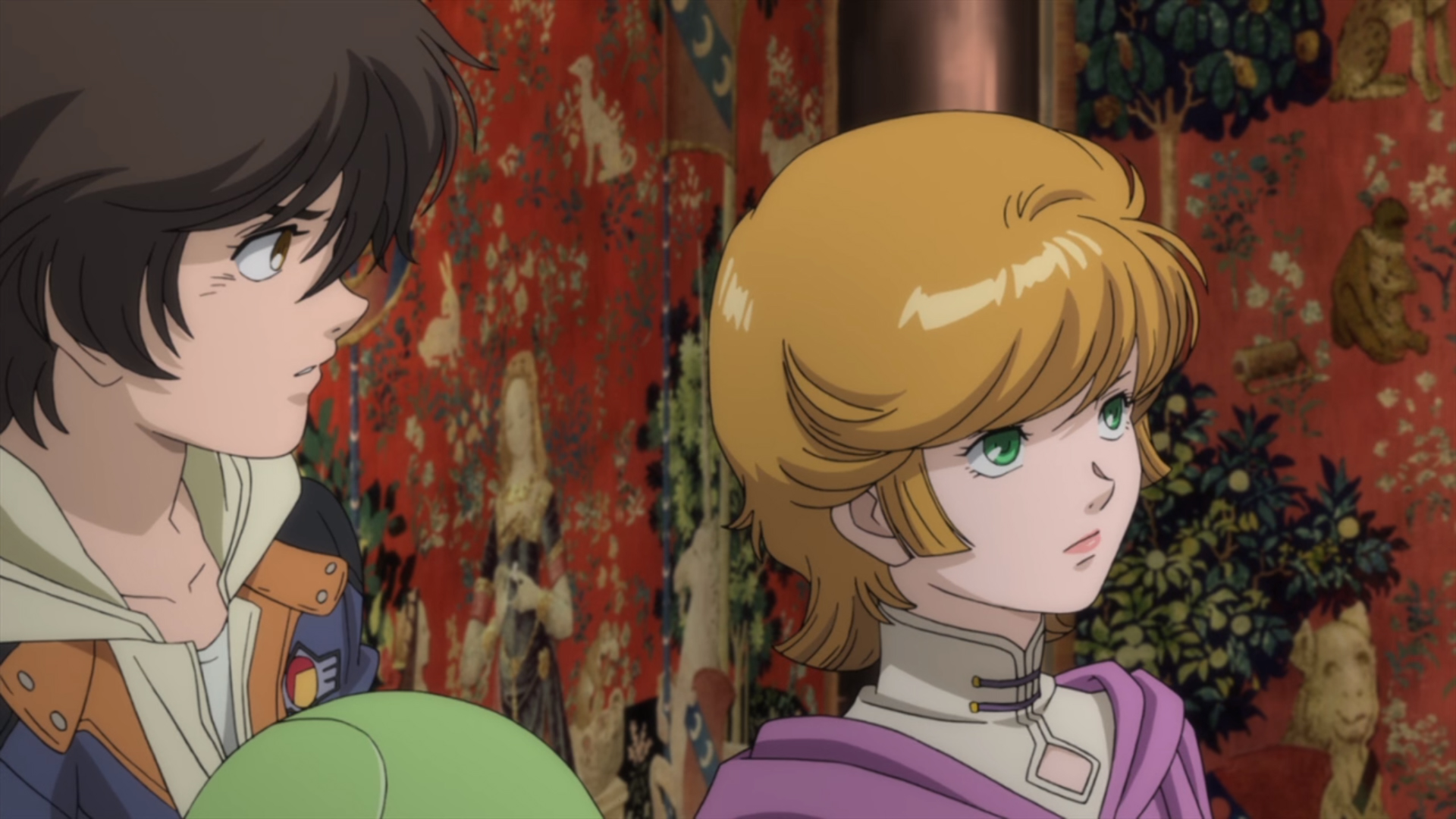 While this may sound like an elaborate treasure hunt, there’s actually a lot more going on, as the series also has to deal with the aftermath of Char’s Counterattack and attempt to tie up some loose ends from the rest of the Universal Century timeline, creating a complex and engaging storyline. It mainly deals with the true meaning of the emergence of Newtypes and the fear of a new generation destroying the old system, while also delving into a lot of political drama on both sides of the conflict, where it’s not simply good guys versus bad guys. As a result, it can be a little hard to follow at times, particularly as characters seem to switch sides on a whim, and many of them operate in grey areas – you’ll often see Banagher later teaming up with people he was fighting to the death with, for example, while the motivations of some characters have them involved in both of the central factions.

While it’s certainly possible to sit down and enjoy the ride, fundamentally it requires you to understand the full social context of the world, as well as have knowledge of the Gundam franchise’s 40-year history in order to fully appreciate it. If you do, then it becomes very rewarding to watch as it fills out the gaps in the franchise’s lore and is full of hidden details, easter eggs and references to the older series. 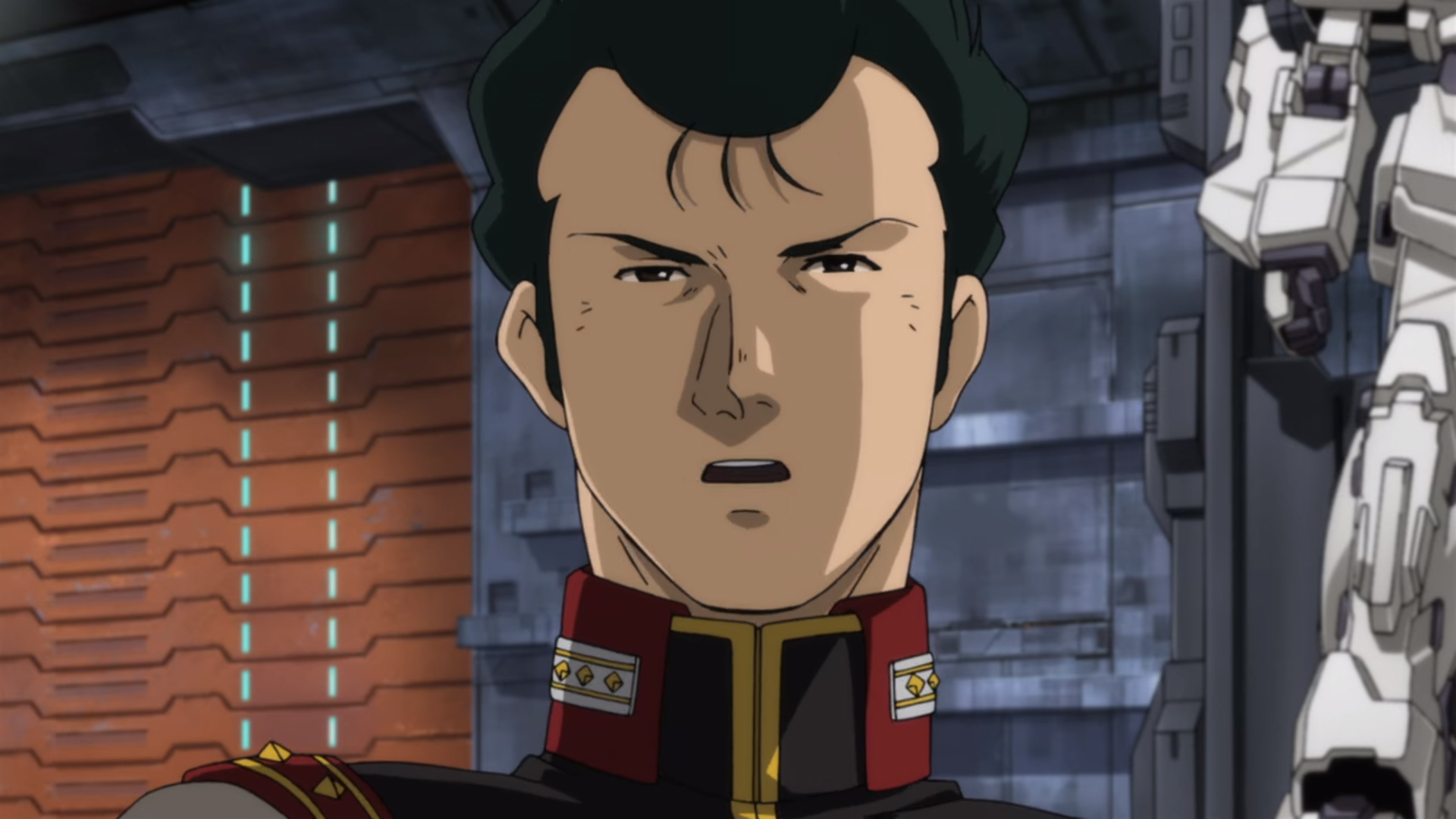 This comes out the most in the characters, as while the majority of the supporting cast is new, there are plenty of familiar faces in here, with the likes of our favourite captain Bright Noa (who has rather mellowed out since the classic series) playing a key role, as well as other characters returning (or referencing other characters) from all three major Universal Century series. While it tries to keep two of these ambiguous in some respect, fans will of course instantly recognise them, and while at least one of them really comes into their own in Unicorn, the other doesn’t quite match up to their original’s legacy.

The newcomers though are a great mix of characters and are generally developed well over the course of the series. Banagher feels like a mix of his predecessors, having a bit of Amuro, a bit of Kamille and a bit of Judau, and certainly fits the bill of the slightly annoying, childish Gundam protagonist. While he means well, he’s often hypocritical, being a pacifist but still going out to fight and kill people, although this does torment him frequently throughout the series. He shares close ties with the Earth Federation pilot Riddhe Marcenas and the Sleeves’ mobile suit pilot Marida Cruz, who all end up being tormented by their blood ties in some way or another and have to fight to overcome them. Meanwhile there is a very nice arc for Marida’s commander in the Sleeves and adoptive father, Captain Zinnerman, who emerges as one of the best characters in the series as he seeks to redeem himself through Marida in the eyes of his deceased daughter. You’ve also got Otto Mitas, who has assumed captaincy of the Nahel Argama, who tries to offer some comic relief for being completely incompetent, but comes off rather annoying instead, frequently endangering the ship due to his stupid decisions. 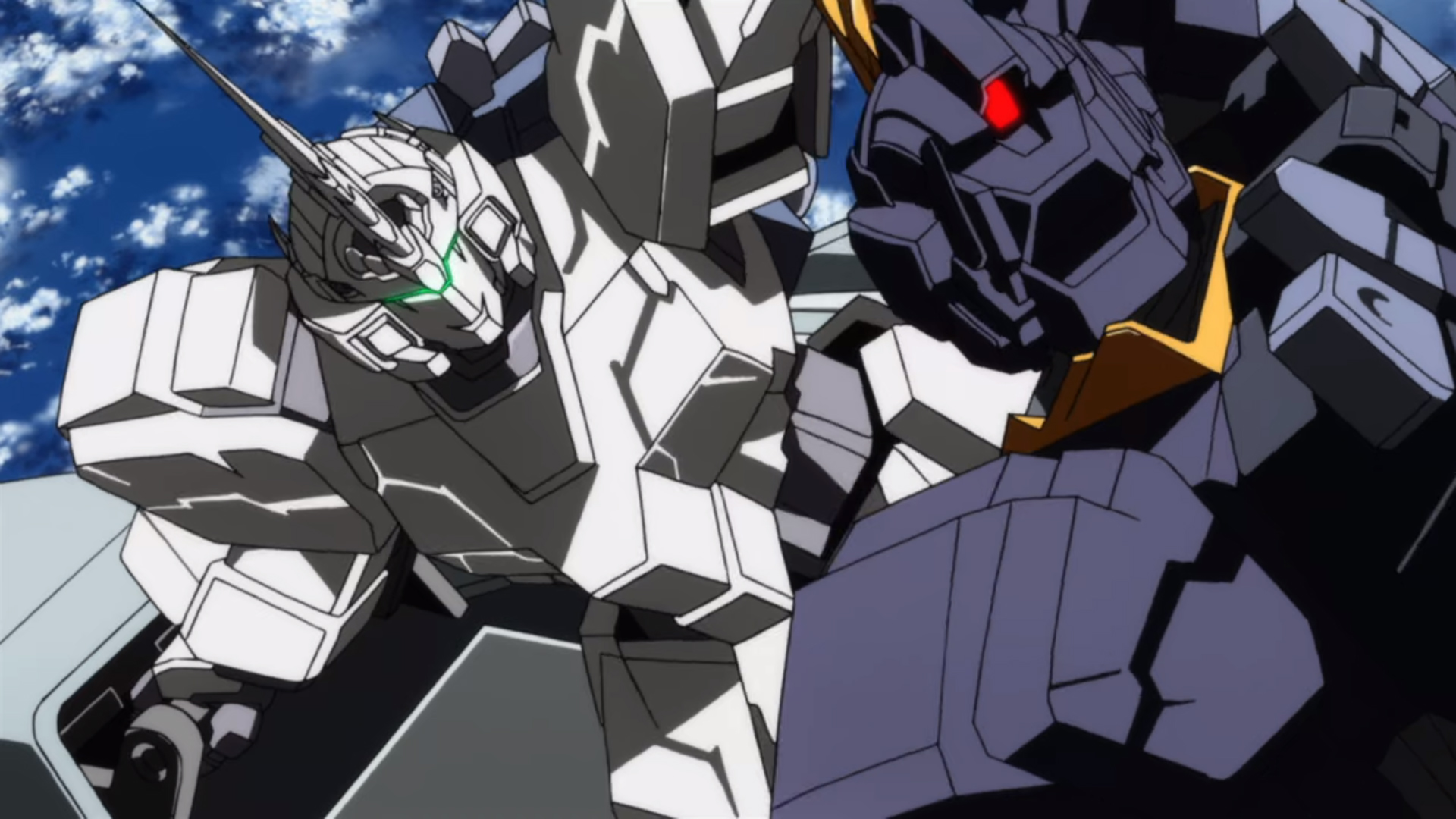 Visually, Gundam Unicorn is one of the most cinematic Gundam entries ever released, with what must have been a strong budget backing extremely high production values. The animation quality is superb no matter if you look at character sequences or action scenes, and the latter are often breath-taking, with the bright laser beams flashing through the blackness of space ending in dramatic explosions. While it might sound a bit Michael Bay, honestly, Gundam has never looked this good, and although the series was produced over a 4-year period, it’s still mightily impressive, considering they were also producing things like AGE, Build Fighters and Reconguista in G at the time.

Also contributing to the impact of the action is the Unicorn Gundam itself, and its sister machine, the Banshee, both of which have dramatic transformation sequences as they change into Destroy Mode after the NT-D system activates. Based on mythical creatures, these things are literal monsters and boast very distinctive designs, embodying their namesakes in both looks and characteristics. The series also features a range of classic mobile suits and new, or iterated, designs, and it’s cool seeing how they have all evolved, like how technology that made the Zeta Gundam revolutionary back in the day is now standard-issue. 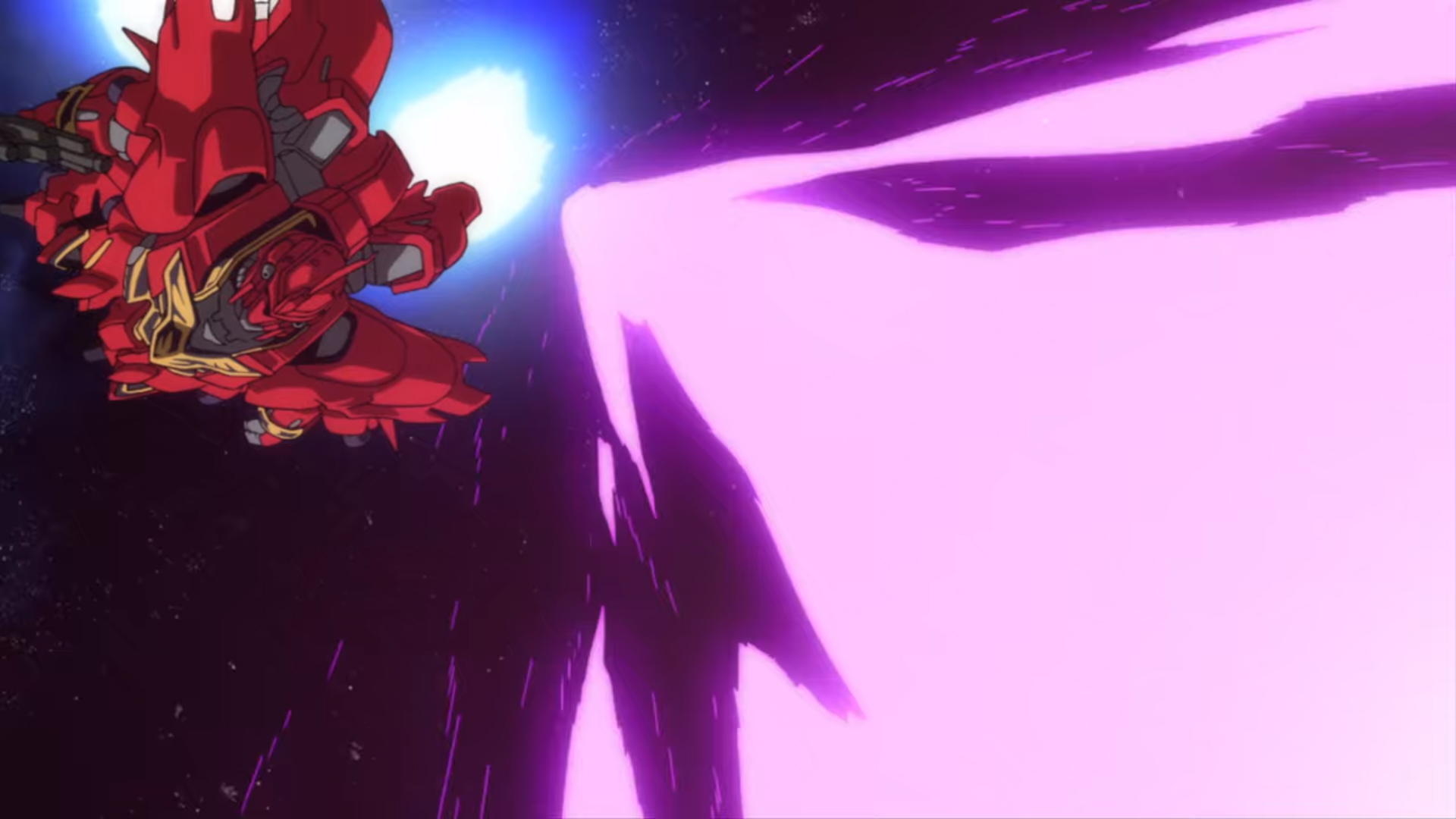 The incredible visuals are backed by an incredible soundtrack, composed by Hiroyuki Sawano. The man known for his signature “Sawano drops” works his magic on delivering an orchestral masterpiece and one of his strongest works, using strong, central themes for key sequences such as the Unicorn transformation scenes, and offering well placed gentler pieces for the drama. The series also goes all-out in its ending themes, collaborating with a different artist for each episode. While my personal favourite is Boom Boom Satellites’ “Broken Mirror”, each one is generally great and often reflects the events of the episode where it features.

Anime Limited’s release of the series includes all seven OVAs with both English and Japanese stereo and 5.1 surround sound audio tracks. The voice acting is generally good, no matter what language you pick, although I must commend those in the Japanese version who are sitting in recast roles for some of the returning faces whose original voice actors have now retired or since passed away, such as Bright Noa who is now voiced by Ken Narita, as they are extremely close to the original and it is very hard to tell the difference!

On-disc extras include a variety of trailers, recaps, and promotional videos for each OVA, along with highlight reels for specific characters and mobile suits. The final disc also contains an extra “Hundred Years of Solitude” bonus episode, which recaps the entire Universal Century from Syam Vist’s perspective. The collector’s edition also comes in a nice-looking box with 20-page artbook and a poster. 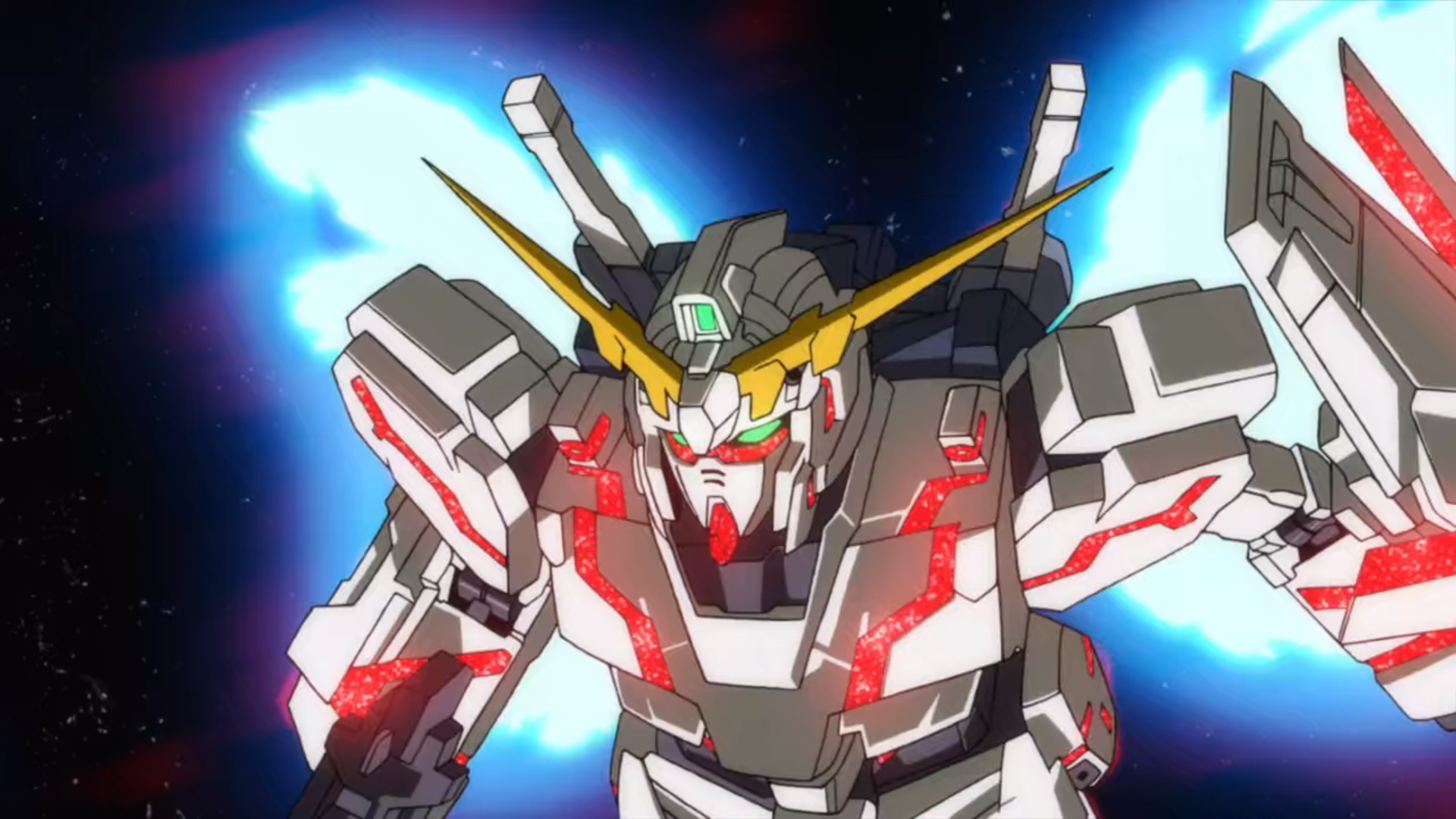 Overall, despite its plot having a very high barrier for entry, being built upon the rest of the Gundam franchise and being complex and hard to follow, Mobile Suit Gundam Unicorn stands as its pinnacle. It’s a cinematic, blockbuster-style experience that brings the characters and battles of the Universal Century to life like never before with incredible visuals and a spectacular soundtrack; and is absolutely an essential addition to any Gundam fan’s collection. 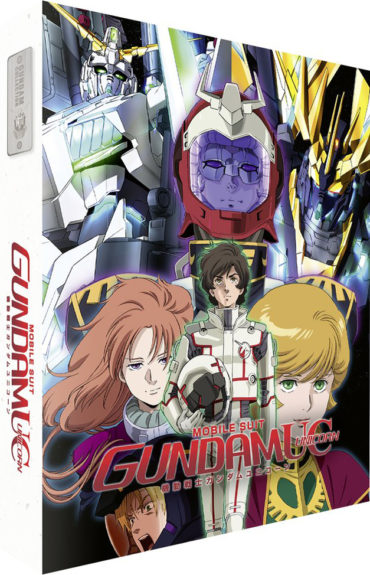