If you’re a fan of director Makoto Shinkai you’ll no doubt already be well aware of his latest film, Weathering With You. With a home video release forthcoming and a successful cinema run behind it, it’s safe to say the story has already built up a sizable fanbase. Today I’m here to check out the manga adaptation from Wataru Kubota to find out if it captures the same magic.

Our story follows 16-year-old Hodaka Morishima, who is taking the ferry from his home on the island of Kozu-shima to Tokyo. Leaving his friends, family and school behind our protagonist is a runaway hoping the big city will offer him a way of life he could never experience stuck on Kozu-shima.

Of course, being a first-year in high school means no one is willing to take a chance on hiring Hodaka and it’s not long before he’s running out of money and options. With no other choice, he decides to contact Keisuke Suga, a businessman he met on the ferry.

Keisuke owns a small publishing company that focuses on an occult magazine that investigates urban legends. Keisuke agrees to take on Hodaka to work alongside him and his niece Natsumi to get to the bottom of the unusually rainy weather Tokyo has been seeing lately.

One of the topics the Keisuke is researching is the existence of a ‘Sunshine Girl’, someone with the power to forcibly break through the rain and bring back the sunlight for a limited time. Unbeknownst to Keisuke, Hodaka already knows who the Sunshine Girl is, having met her while looking for a place to stay and later rescuing her from some dangerous people.

The girl is known as Hina and together with Hodaka and her younger brother Nagi, she starts a business to bring people sunshine in return for payment. Neither Hodaka nor Hina fully understands the power at her disposal, but if they can bring some happiness to people’s lives, then they’re willing to use it.

While this first volume of manga captures a lot of the reasons I fell in love with the Weathering with You film, it also glosses over quite a few important details. I don’t think someone new to the story could read this manga and understand everything that’s happening. Too much is left unsaid and requires existing knowledge to fill in the blanks.

For example, it’s never stated how Hina got her powers: something the film shows us is due to her walking under a shrine gate and praying for sunshine. Likewise, it’s never explained what a Sunshine Girl is, this, too, is something I only understand from prior knowledge.

It’s not all bad though, as mangaka Wataru Kubota adds some character interactions we didn’t see in the movie which do lend some emotional depth to the whole thing. I’m not sure they’re enough for me to tell people to read the manga, but it’s certainly a point in the adaptation’s favour.

This appears to be Kubota’s first serialised work and sadly that does show in the artwork. While backgrounds are detailed with plenty to see, the characters come off as rather flat. I can’t quite decide what about them gives this impression, whether it’s because they’re not detailed enough or something else. The one thing that constantly bothered me was the fact that the pupils of the Hadoka and Hina are often quite empty and not particularly expressive and perhaps that led to the overwhelming feeling that the art is lacking.

I think it’s always going to be difficult to watch a film like Weathering With You with such spectacular visuals and not compare it with its adaptations. If I hadn’t seen the film, maybe I’d not be as bothered by the manga’s art, but ultimately an adaptation of such a popular property is always going to end up being compared by its readers.

So is this version worth reading if you’re new to Weathering With You? I don’t think it’s a good starting point, so I’d highly recommend either watching the film or reading the novel version (published by Yen Press). But what if you’re an existing fan? Well, in that case, the answer is a bit more tricky. If you’re a massive fan, then you’ll probably be interested in the new scenes added to the story, but otherwise, I just don’t think it’s good enough for every Weathering With You fan to own.

Weathering With You Volume 1 comes to the West thanks to Vertical Comics and has been translated by Melissa Tanaka. The translation reads well with no issues, although the tone of the characters does feel a little different from the film. I think this is probably more to do with the dialogue of the manga in Japanese rather than anything to do with the translation, though. The book opens with some lovely colour pages (an example of where Kubota’s art does do the original justice).

The manga is ongoing in Japan at two volumes and Vertical has Volume 2 scheduled for release in English in November.

Overall, Weathering With You Volume 1 is a bit of a disappointment compared to the beloved film. It’s not a particularly bad adaptation but it just doesn’t capture the magic of the movie and is therefore only recommendable to those who want to own everything to do with the story.

A free preview of the manga can be found on Kodansha’s site here. 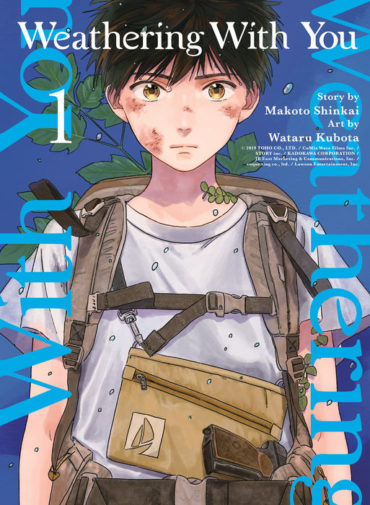 Title
Weathering With You Volume 1