Back in August Yen Press published the first volume of May These Leaden Battlegrounds Leave No Trace, a new entry into the war/sci-fi genre. Although this first instalment left me a bit lukewarm on the series, today I’m back to take a look at Volume 2 and find out if things have improved!

As we reunite with protagonist Rain and his ‘Ghost’ companion Air we find the two facing difficulties. For weeks now the East has been losing in battle, even during small fights and nothing Rain does with his Devil Bullet power makes any difference. No matter who he erases, nothing ever changes in his country’s favour.

To try and break the cycle of losses, Rain and Air are given a change of pace and assigned to transport mission, guarding new prototypes for the Exelia (the armed weapons our soldiers pilot). These machines could change the course of the war, which of course means the West are eager to get their hands on the prototype too.

En route, the enemy attacks and Rain finds himself at the bottom of a mountain, badly wounded and stuck with Deadrim, a soldier from the West. If Rain could erase Deadrim with a Devil’s Bullet then he could prevent the attack ever happening, but she’s not just any run-of-the-mill fighter and gives Rain no opportunity to strike. Even when he finally reunites with Air, the two can’t figure out how to get out of the situation they’ve found themselves in. Are they destined to perish on the mountainside?

While Volume 1 of May These Leaden Battlegrounds Leave No Trace had its fair share of comedy, this time around the situation is dire from the beginning with no room for more light-hearted exchanges. While a part of me was happy not to spend time at the academy or be bogged down by the abundance of characters we met in Volume 1, I must admit I also missed it.

It feels like author Kei Uekawa has taken us from one extreme to another. What started as a more fantastical drama has jumped into a darker gritty story more akin to 86, which doesn’t work as well when we’re not as attached to the characters yet. While protagonists are unlikely to die, I did wonder for a bit if Uekawa was planning that, especially since we saw at the ending of Volume 1 that someone else knows about the Devil’s Bullets now. This gave them a potential out for changing protagonists and frankly that theory was one of the most interesting things this book had going for it.

Speaking of someone else knowing about the Devil’s Bullets, that’s something I wish this instalment had dealt with. Part of the reason I picked up Volume 2 was to find out how the series would deal with that and the fallout it would cause for Rain, so I was certainly disappointed when it was pushed aside.

Another thing that bothered me is that Rain seems to have had a change in personality between the last book and this one. Previously he was presented as a genius and one of the only reasons he could withstand using the Devil’s Bullets was because of his mental fortitude. At the beginning of this book, however, he’s upset by being unable to make any difference to the battles they’ve been fighting and he becomes reckless. This leads him to argue with Air and ignore her opinions, something he wasn’t prone to doing before.

It’s certainly not unreasonable that Rain could become like this over time, but the little we’re shown just isn’t enough for me to believe he’d change so drastically, so quickly. Not to mention that his actions are causing Air to think about ending his life before he endangers everyone, which is also very extreme (and unrealistic) compared to where we were.

Although I’m being harsh on the series, I don’t think the story being told here is awful. As I said earlier, it’s compelling in its own way, since it does feel that there is a considerable risk to Rain. Deadrim, too, ends up being an interesting character, although her secrets aren’t unveiled until near the end of the book.

May These Leaden Battlegrounds Leave No Trace Volume 2 comes to the West thanks to Yen Press and has been translated by Roman Lempert. The translation reads well with no issues to speak of. Volume 3 is currently scheduled for release in February 2021 and could be the last volume since Japan hasn’t had another in well over a year at this point (cancelled, perhaps?).

Overall, May These Leaden Battlegrounds Leave No Trace Volume 2 proves a disappointing read. Although the storyline presented is quite good, it ignores what Volume 1 was setting up and completely overhauls Rain’s personality. If you were a fan of the first book then it might be worth continuing, but if you found yourself on the fence then I’d advise giving it a miss. 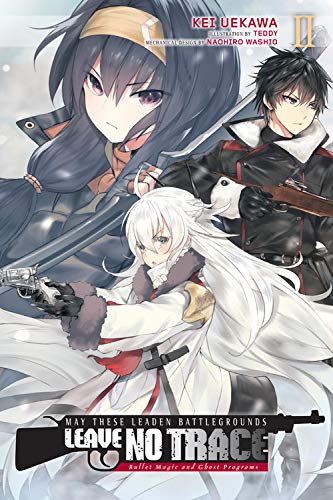 Title
May These Leaden Battlegrounds Leave No Trace Volume 2

May These Leaden Battlegrounds Leave No Trace Volume 1 Review

A war between East and West has waged for 100 years. One day Rain Lantz stumbles across Silver Bullets with the ability to change history itself. Will he bring an end to the war or be destroyed by the pressure? We investigate with the first volume of May These Leaden Battlegrounds Leave No Trace.