Over the summer VIZ Media began releasing new yuri series How Do We Relationship?. Although the first volume had a few issues, the series still showed promise and so today I’m here to take a look at Volume 2 and find out if it has managed to improve at all.

The story picks up after the end of Volume 1 with Saeko and Miwa having slept together. Now they’ve spent the night together, our couple is even more in love. However, although they might be happy with one another, they still have plenty of problems to face – including a training camp for the universities’ band clubs!

For this training camp, the main goal of the organisers is to get everyone from different grades interacting, so they decide to mix up the groups and hopefully cultivate some new friendships. Unfortunately, this means that Saeko and Miwa are split up and, if that wasn’t bad enough, Miwa is paired with a second-year boy, called Konosu, who is out to reveal our protagonist’s relationship to the world…

With Saeko and Miwa spending so much time together (and Saeko being so clingy with her) it’s obvious to most that the two are in a relationship, but neither want it to be public knowledge: Miwa because it makes her uncomfortable being open about her personal life and Saeko because she knows how readily you can be rejected by society for being gay.

Having worked out the two are a couple, Konosu makes pointed comments about them being together, hoping to have them reveal the truth. This doesn’t seem to be being done with good intentions, it’s almost like Konosu is setting them up for failure. As the volume goes on, it hints at Konosu having a reason for being so pushy but we don’t quite get to the bottom of it within the chapters we’re given.

It’s not just Konosu the two have to deal with though, as time apart drives Saeko to become lonely. She also becomes jealous of the boys (minus Konosu) in Miwa’s group who think they have a chance with her since she hasn’t told them about being taken. These are feelings Saeko doesn’t know how to deal with. She resents Miwa for being so shy and easily led but knows being jealous is only going to lead to bitter feelings between them.

Instead of talking to Miwa about how she feels, Saeko tries to get intimate with Miwa whenever they have a moment alone together. Of course, this does nothing but annoy Miwa as both she and us readers can tell it’s a defence mechanism to hide Saeko’s true feelings. That said, nothing can begin without honesty and if Miwa can break through Saeko’s hard exterior, maybe their relationship can become even stronger.

One of my biggest issues with How Do We Relationship? Volume 1 was how pushy and overbearing Saeko was toward Miwa. While that hasn’t particularly changed this time around, I think author Tamifull has framed it better. It’s clear reading these chapters that Saeko isn’t as carefree as she makes out and there are some deep-rooted fears and anxieties underneath, which explain her actions. I wish it had been presented this way in the first instalment since it makes Saeko a more likeable character.

While a lot is happening in this volume, I think Tamifull manages to offer plenty of heart-warming moments alongside the drama of the training camp. Both Saeko and Miwa are given solid character development too and it’s clear that Tamifull has exciting things in store for them as this whole volume dangles interesting plot threads in front of us. There is certainly something meaningful behind Konosu’s actions, so I look forward to getting to the bottom of that as well.

As previously mentioned How Do We Relationship? Volume 2 comes to the West thanks to VIZ Media and has been translated by Abby Lehrke. The translation reads well with no issues to note. VIZ currently have Volume 3 scheduled for release in June.

Overall, How Do We Relationship? Volume 2 is a significant improvement on the first book. Now that we’ve spent more time with our heroines, I’m becoming more invested in their story and eager to see where it goes. Perhaps most importantly, this manga is now much more recommendable to fans of the genre! 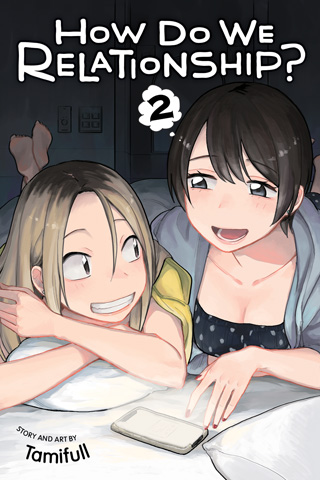 Title
How Do We Relationship? Volume 2

How Do We Relationship? Volume 1 Review

When Miwa first meets Saeko, the latter compliments her on her wonderful breasts. It’s a meeting like no other, but the two form a firm friendship that soon evolves into something more… With this debut volume of How Do We Relationship? we find out the series is everything yuri fans have been waiting for.