Mangaka KAITO is perhaps best known for Weekly Shonen Jump series Cross Manage, a sports manga focused on lacrosse. Now the creator is back with a new series, Blue Flag, which I’m here to review. Is it a captivating read? Let’s find out!

The story follows Taichi Ichinose, a third year in high school. Taichi tries to keep to himself, but with the class changes brought about by entering his final year, he ends up being placed in the same class as the clumsy and awkward Futaba Kuze, as well as childhood friend Toma Mita. As kids, Taichi and Toma spent all their time together, but now Toma is popular and Taichi keeps him at arm’s length.

Taichi understands why he distances himself from Toma, but when it comes to Futaba he just has an inherent dislike for her. Maybe it’s because her awkward nature reminds him of himself, or perhaps it’s just that her life is easier than his. One day Taichi runs into Futaba in a bookstore where she’s trying to reach a book on a shelf just out of grasp. Taichi offers to help and realises that Futaba is looking at self-help books for women in love! Afterwards, she musters up the courage to ask Taichi for advice on how to approach her crush – Toma.

At first, Taichi wants nothing to do with helping Futaba and doesn’t understand why he should; after all, he knows Toma has a crush on someone else and that Futaba isn’t his type. However, Taichi gets involved anyway and this brings him closer to both Futaba and Toma. Perhaps the time spent with them will rekindle old friendships, form new ones, and change Taichi’s life for the better?

Blue Flag finished its run in Japan in April and as someone who has followed the series to completion on digital service Manga Plus, I found this was a great time to revisit its beginnings. The series branches out into some very interesting and heartfelt directions as it continues and I was surprised by how many threads mangaka KAITO has woven into even this first volume.

While they’re not a focal point just yet, Volume 1 of Blue Flag shows us that some of the cast are dealing with their sexuality. Scared of others finding out and trying desperately to keep it to themselves, this is something that will be relatable to many readers and a suitable hook to keep you coming back, if the other elements of the story don’t.

What I especially like about this manga is that KAITO is very subtle in the way he drops hints about what his cast are thinking or feeling. The friendships between Taichi, Toma and Futaba feel realistic too. It’s easy to understand why Taichi is who he is and it’s equally satisfying to see him coming out of his shell as he becomes closer to the others. I think Blue Flag is a slow burner, but incredibly rewarding for it.

It’s not just the story that KAITO has crafted well, as his artwork is also good. While backgrounds are usually quite sparse with very little detail, characters are detailed and very expressive. KAITO also often draws Futaba and Taichi in more chibi styles, which I think works effectively during the more comedic moments and offers a contrast to the more serious tone of the series otherwise.

Despite the fact the series is aimed at the shonen demographic, the artwork and content make me think of a josei or shojo work instead (minus the sakura petals and sparkles often associated with the two). I think more than anything that’s just a sign that Blue Flag will appeal to readers of any genre, rather than simply those looking for a new shonen romance.

Blue Flag Volume 1 comes to the West thanks to VIZ Media and has been translated by Adrienne Beck. The translation reads well with no issues of note. The series is being published under the VIZ Signature imprint, meaning it’s one of their larger format books. Blue Flag is complete in Japan at 8 volumes, VIZ currently has Volume 2 scheduled for release in June.

Overall, the first volume of Blue Flag offers a thoughtful and intriguing look at youth and love. With an interesting collection of characters and some hints at deeper issues to be explored later, this is certainly a manga to keep an eye on. 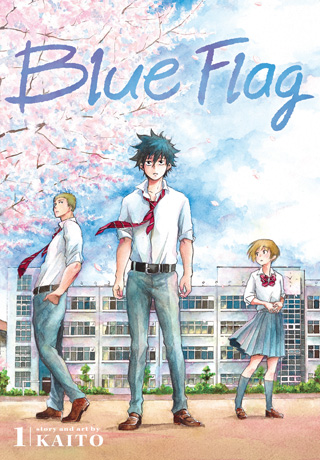