The second volume in this series has been a long time coming. It has been over a year since the first volume got an English release, but readers can now make some more progress in this manga adaptation of the video game spin-off.

Komaru Nagei, sister of Makoto, the original hero in the first game, and Toko Fukawa, aka Genocide Jill, are desperately trying to find a way to escape from the city which has been taken over by a group of children called the “Warriors of Hope”, who plan to kill all adults and make a utopia just for children.

This volume begins at a broken bridge, where the two girls have befriended a boy named Yuta Asahina – the older brother of Aoi the Ultimate Swimmer. He decides to swim across the water to find help, but this causes more trouble, due to a special bracelet that he, and Komaru have both been forced to wear.

Komaru and Toko then plan to escape via the city’s subway system, only for them to have to fight against some of the ringleaders of the Warriors of Hope, who have armed themselves with mecha. Fortunately, Komaru’s “Hacking Gun” shaped like a megaphone is able to destroy it. Komaru comes to realise that she can’t escape the town without removing her bracelet first, but may be able to gain some help from an underground resistance movement of adults.

As with the first volume, the main appeal is probably the characters. While the old faces are good to see, there are some new ones that make brief appearances, but who still are able to flesh out other characters who appear in the original game. Aside from Yuta, another person to appear is Taichi Fujisaki, the father of Chihiro Fujisaki the Ultimate Programmer, but once again his involvement is cut tragically short. We do, however, see one of the original game characters at the very end of this volume to give us that all-important hope.

The quality of the writing, art, translation and lettering remains at the constantly good level it was in the first volume. Hajime Touya’s art is fun and thrilling, and Jackie McClure’s translation seems to have no obvious issues. There has been a change of staff between the two volumes, with Paul Starr now doing the lettering, taking over from John Clark, but there appears to be no dip in quality.

The only issue, for those who like extras, is that the “Despair Mail” section featuring art and cosplay readers have submitted to the publishers, has now moved online for people to see instead, but of course this just means that everyone can see it without having to buy the books.

Volume 2 has been pretty entertaining. Just a shame that Volume 3 will be another long wait.

Read a free preview of this manga at the publisher’s website here. 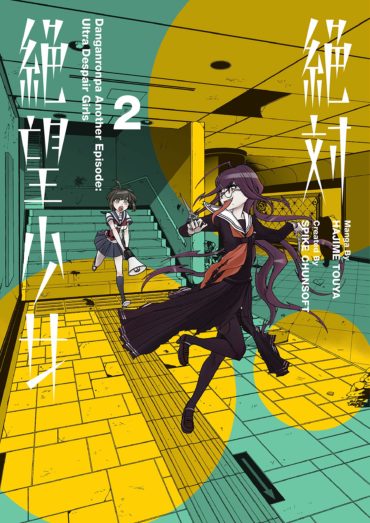