WARNING: This title is not suitable for those of a nervous disposition, containing violent scenes and references to rape with underage protagonists.

This manga, soon to be adapted into an anime TV series, takes something cute and turns it into something horrific.

It follows schoolboy Shuichi Kagaya, a boy who is bright and intelligent, and Claire Aoki, a girl two years his junior. The first we see of them is of Shuichi strangling Claire and wanting to kill her.

We then go back in time. Originally, Shuichi was seemingly a model student, but he hides a secret. Somehow, for reasons he does not understand, he is able to transform himself into a monster. In this state he looks like a living dog mascot costume. Like a dog, he also has a heightened scene of smell. He hides it as best he can, but when he discovers a girl trapped in a burning building, he uses his powers to rescue her. When he gets the girl out, his animalistic urges begin to take over and Shuichi starts to remove the girl’s underwear, before stopping himself and returning to normal.

The next day, Shuichi has lost his mobile phone, and eventually comes to discover that the person who now owns it is Claire, the girl he rescued, who is at the same school. She was aware of Shuichi’s transformation the whole time and, using a series of tricks, blackmails him into doing what she wants, otherwise she will tell everyone about both his secret identity and that by trying to remove her underwear Shuichi was trying to rape her.

Claire reveals that she is interested in monsters like Shuichi because her missing sister is also one, having killed their parents. She is trying to track her sister down, and one of the few clues she has is a mysterious coin depicting a five-pointed star. However, other people with transforming monster powers are also after her. After Shuichi flees from one fight with a murderous rival, taking Claire with him, Claire discovers that the back of Shuichi’s monster form has a zip in it. Opening it up reveals that Shuichi is hollow inside. So she decides to get inside Shuichi and use his body to force him to fight back.

There is certainly plenty of stuff in this title that people will find objectionable: violence, the threat of rape between two underage protagonists, and some will also be put off by the fan service. The very first page show’s Claire’s underwear, and it’s not the only time you see it. Given all this, Gleipnir doesn’t seem to be the most progressive manga around. Regarding the previous work of author Sun Takeda, it is hard to read up on him. On Anime News Network, the only thing he is credited with is Gleipnir. However, research reveals that most of his previous work has been comedy, often with some romance added into the mix. Past works include a fantasy story about a boy turned into a girl by a prince from a parallel world, and another about a pair of identical twins with polar-opposite personalities. As a result Gleipnir appears to be something of a departure for him into something more serious.

In terms of positives for the series, there are two main ones. First is the character design, especially with the monster transformations. Shuichi’s mascot costume is both cute-looking with its dog-like appearance, but also scary with its stitches and hollow insides. The second is the way the story unfolds. You certainly want to know how Shuichi gained his powers, especially considering that he himself doesn’t know how he got them. We come across certain key elements as to how it has come about, but we are still not certain as to who is truly responsible. The closest you can currently make to an educated guess is that the manga’s title is a reference to Norse mythology, the “Gleipnir” being a binding that held the great wolf Fenrir, so maybe there is a dog/wolf connection?

Concerning Kodansha’s handling of the manga, there appear to be no major issues concerning the translation carried out by ZephyrRZ, and given the nature of the title’s content I think rating it as  Mature 18+ is a wise move. However, there are no extras given with the book. No translation notes, no colour pages or anything.

In terms of an overall reaction, while the story is enough to make me want to review the second volume, there are other titles I would probably want to spend my money on first before returning to this. 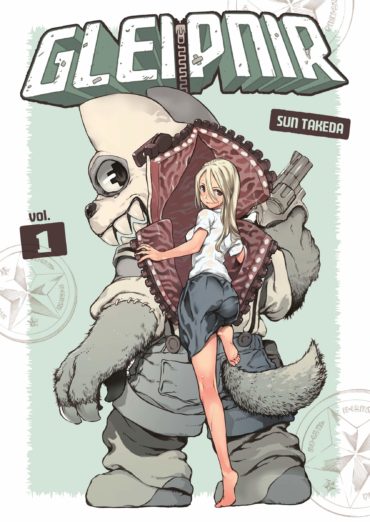