In the last volume of Something’s Wrong With Us Nao and Tsubaki were forced to go further to prove their relationship to Tsubaki’s grandfather and mother. Now the two are sharing a room and in a moment of passion end up sleeping together, but afterwards, Nao asks Tsubaki what he would think if she was actually Sakura…

Tsubaki’s response to Nao’s question is simply that he’d have her disappear out of his sight and he goes on to talk about how he saw Sakura’s mother with his father and truly believes she killed him.

Until now Nao had never heard Tsubaki’s side of the story when it comes to her mother and this revelation throws her for a loop, but she still doesn’t want to believe her mother was capable of committing such a deed. If nothing else, this discussion proves to Nao that she must never let Tsubaki know her real identity, but she might not have a choice as Tsubaki’s mother is closing in on the truth.

With her son and Nao becoming closer by the day, Tsubaki’s mother is resolved to finding a way to get Nao kicked out. Especially since she’s realised the resemblance Nao holds to Sakura’s mother, which in turn has led her to believe Nao truly is Sakura.

While undergoing a particularly rough interrogation, Nao is saved when a woman turns up who claims to be her mother and manages to sell her story to Tsubaki and his mother. Nao has no idea who this woman is but is relieved to have someone on her side.

Afterwards, Nao confronts the woman who reveals she was just doing someone a favour but tells her to come to her pub where she might be able to meet the person behind it all. Of course, Nao must first escape the watchful eye of her future mother-in-law.

While Volume 2 of Something’s Wrong With Us was fairly slow, this instalment picks up the pace and manages to pack in quite a few twists and turns. It feels like it won’t be long before Nao’s secret is finally believed and it’s clear even Tsubaki is starting to suspect Nao is Sakura, which makes for a compelling read. I both want to see Nao succeed in her goals and also be found out, since the fallout will no doubt be highly entertaining.

It feels like author Natsumi Ando has gotten a handle on how to progress the story along, after a bit of a wobble previously. I do worry things are getting a little over-dramatized toward the end of the book, but Something’s Wrong With Us was never realistic.

Some readers may be put off by how dramatic events are getting, especially involving Tsubaki’s mother, but I think if you’re invested enough in the characters, then that can be set aside. It’s just a shame that Ando jumps between more down-to-earth problems like Nao having to make sweets in the previous volume to Tsubaki threatening to get rid of her if she turns out to be Sakura.

There’s nothing wrong with these stories on their own, but Ando doesn’t seem to know how to transition between them gently which leads to a feeling of turmoil for the reader. It’s not a big problem yet but it has the potential to be, if we have a constant back and forth going forward.

Something’s Wrong With Us Volume 3 comes to the West thanks to Kodansha Comics and has been translated by Sawa Matsueda Savage. As always, the translation reads well with no problems to note.

Overall, Something’s Wrong With Us Volume 3 returns to the gripping drama we were presented with, to begin with. Although this instalment ramps the dramatics up compared to Volume 2, it still proves an entertaining read and leaves you eager to see more. 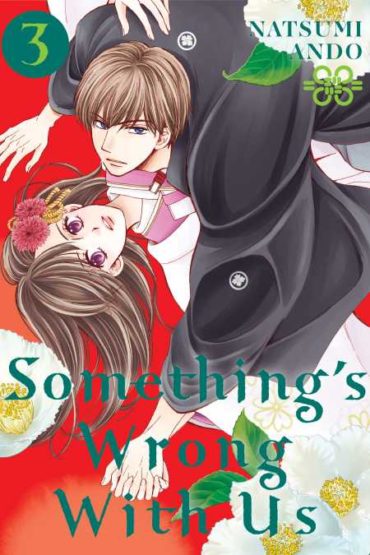 Title
Something's Wrong With Us Volume 3