After a volume spent focusing on Tsubaki, Something’s Wrong With Us Volume 5 has some making up to do when it comes to turning the spotlight back on protagonist Nao. Does it succeed? Let’s find out!

This instalment of the series opens similarly to Volume 4, with Nao in bed with Tsubaki who vows to show her that he cares about her in his own way. Having ultimately decided not to tell Tsubaki the truth about who she is, Nao continues to struggle with the fact she’s lying to him while also falling in love with him.

Now that she’s been working for the store for a while, Tsubaki decides it’s time for Nao to wear a proper uniform, but this also comes with a heavy sense of responsibility for our lead. The pressure is piled on all the more when Tsubaki’s mother asks Nao to serve tea for her and some friends, which leads to Nao accidentally deeply offending them. She might have been set up by her future mother-in-law, but that doesn’t make things any easier.

Elsewhere in Volume 5 we finally get to learn more about one of Nao’s coworkers, Jojima, who has been hinted at having a crush on her in previous books. After Nao is upset about the run-in with Tsubaki’s mother, Jojima offers her some sweets back at his room in the staff dormitory, a place Nao hasn’t set foot in since she and her mother lived there many years ago.

Unfortunately for Nao, Jojima does not have pure intentions when it comes to getting close to her and his real goal is far more sinister. Not only does his meddling put Nao and Tsubaki’s relationship on rocky ground, but as he spends time with Nao, he realises she might not be who she says she is…

As in Volume 4, I think Something’s Wrong With Us benefits from shifting its focus onto the surrounding cast. Jojima’s story is somewhat stereotypical in terms of being someone holding a grudge and doing evil because of it, but it does fit the tone of the series relatively well. While some might wonder why Nao doesn’t notice that he has an alternative agenda in getting close to her, I think, given her naivety, it makes sense.

The one thing I am starting to get bored of is Nao’s indecisiveness surrounding Tsubaki. This is the second volume where that has been the backdrop to a lot of the drama and I find it the least interesting aspect, largely because it feels forced. There is enough else going on where author Natsumi Ando doesn’t need to fall back on it.

If I have one complaint, it’s the fact Ando stuffs so much into each volume, without bringing earlier storylines to a satisfying conclusion. It feels like plot points are presented and removed without any rhythm or reason, simply to make a return further into the series. It’s messy and would be a big turn-off for me if not for the fact that the overall mystery keeps me invested. There is a very interesting cliffhanger at the end of this volume too, which undoubtedly is going to have me coming back for Volume 6 to see how it pans out.

Despite my complaining, I do think Something’s Wrong With Us is a good read. You just need to be able to overlook the problems and enjoy the best moments, which is easier said than done for some but I think that, provided you’ve been enjoying it up until this point, you’ll be on board for the long run. Unless something completely ridiculous happens, which it might…

Something’s Wrong With Us Volume 5 comes to the West thanks to Kodansha Comics and has been translated by Sawa Matsueda Savage. The translation reads well with no issues to note and there are helpful translation notes. The series has recently concluded in Japan at sixteen volumes and Kodansha has Volume 6 out in English already, with Volume 7 following in February.

Overall, Volume 5 of Something’s Wrong With Us presents some interesting new storylines while also rehashing some of the same old problems. If you’ve been enjoying the series then this certainly won’t turn you off it, but I am eager to see the author move away from some of these issues sooner than later. 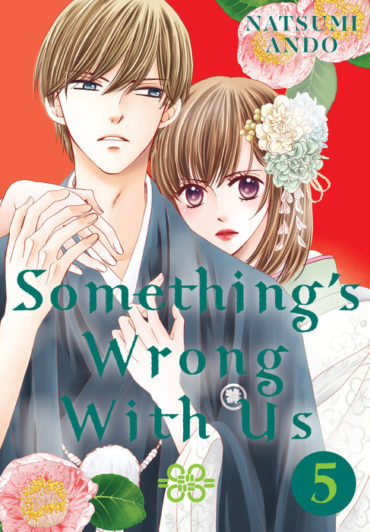 Title
Something's Wrong With Us Volume 5