Some of us prefer dogs as pets, some of us cats – while many more, like mangaka Hidekichi Matsumoto choose to keep both! This manga collects together her day-by-day accounts in words and pictures (jottings and cartoons) of the joys (and pains) of living with one of each, interspersed with photos of her real-life pets. If you’re a pet-owner (and many of us are) these will resonate strongly as the antics of Inu-san (Mr. Dog) and Neko-sama (Lord Cat) will be very familiar.

After introducing us to her pets: the exuberant, painfully eager to please Inu and stand-offish, disdainful Neko, the mangaka shows us amusing vignettes of everyday life with the two, sometimes in 4-koma format, sometimes in more free-flowing bite-sized chapters in which the art (much like the two pets) spills out and romps gleefully across the page. There’s not really a plot, not even a timeline (although one of the bonus chapters at the end recounts ‘How I met Inu’). The mangaka’s love for her pets – in spite of their frequent misdemeanours – radiates from every page and every exuberant image. Her style is idiosyncratic; the drawings look as if they’ve been dashed off in a couple of seconds but are deceptively simple as she knows how to get the maximum comic effect from the panels. 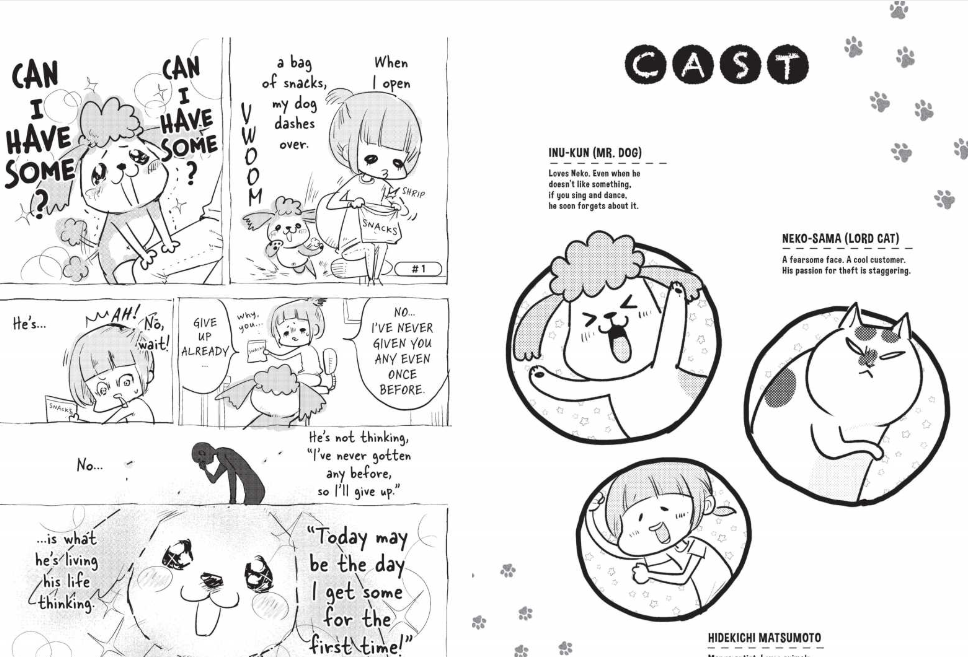 For the most part, the two pets exhibit predictable but no less engaging behaviours. Merely accidentally brushing against Inu’s lead sets the poodle off into an ecstasy of frenzied anticipation. “TIME FOR WALKIIIIES!” Whereas Neko spends much of his time ignoring his mistress, even (on purpose, maybe?) ignoring a new toy. And as for attitudes to bath-time, well…you can probably guess who loves being washed and groomed and who doesn’t.

I confess that I’m very impressed by Matsumoto-sensei’s ability to clip the nails of both her pets, something I’ve failed dismally at doing in the past, incurring trips to the vets. Every aspect of owning a pet is dealt with here; the mangaka doesn’t hesitate to show the downsides (accidents involving litter trays etc.) as well as the benefits. Bedtime is an ongoing battle for dominance, with the human losing more often than not to the wriggly pets who are totally oblivious to their mistress’s discomfort.

Little glimpses of the solitary nature of a mangaka’s working life (although Matsumoto’s mother makes occasional appearances) show up when in #32, she contacts a telephone psychic at the end of another solitary day just to talk to another human being. Which sounds terribly sad – but she makes light of it, enjoying indulging a fantasy of living another life in Latin America herding alpacas (and showing us a very different art style). And a chat with her editor brings back memories of her previous dog who died of old age, leading her to feel sad that she didn’t express her feelings to him enough, especially at the end of his life. Relatable feelings, again, lightly expressed but tellingly so.

A special shout-out to the letterer/s here (Eve Grandt and Risa Cho are credited with ‘production’) as well as translator Kumar Sivasubramanian, who have all done a wonderful job in rendering the exuberant colloquial text into English (just check out the dog and cat names in #14) and the different ‘voices’ of the pets – not to mention the many sound effects.

This manga is a charming but hectic account of the days (and nights) in Matsumoto’s household that will appeal to pet-lovers everywhere who are bound to recognize the antics of their own pets in some of the behaviours lovingly recorded by the mangaka. An anime TV series starts in October 2020. This series began (and continues) on Twitter ‘New Chapters Every Sunday’ (details given at the end of the volume).

Read a free extract at the publisher’s website here 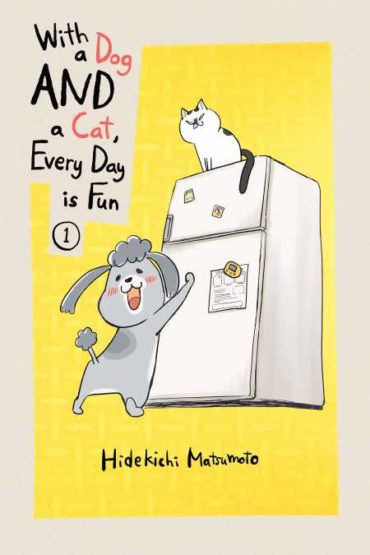 Title
With a Dog AND a Cat, Every Day is Fun Volume 1 Review

Ultimately the existence of Nisemonogatari in English translation is bittersweet. The arc works well as an end to everything that has come so far but what should have been a high point for the series is brought down by a change in translator.