Ko Yamori is a 14-year-old kid suffering from insomnia and feeling increasingly distanced from his life during the day. After reading up advice on how to handle his insomnia, he decides to go for a walk in the middle of the night, without anyone in his home knowing where he is. This seems like a good idea to Ko until he bumps into Nazuna, a mysterious girl who offers to help him ‘sleep’…by sucking his blood! To the surprise of both of them, not only does Nazuna find Ko’s blood divine, but Ko now has something to be passionate about…becoming a vampire.

Vampire stories have been told since the 18th century, with romantic spins on the famous creature becoming more popular in the 20th century. But due to the more contemporary versions we’ve had for the past few decades, if I said ‘vampire romance’ your mind is likely to conjure up images from Twilight, Buffy the Vampire Slayer, Vampire Knight, True Blood, etc. All of these modern interpretations of vampire romance have things in common: the tall dark and brooding vampire, the human love interests (mostly female), and often come with a tragic element with the ‘will they or won’t they’ not just being about whether they get together, but also whether the love interest will become a creature of the night. Well, Call of the Night, the latest manga release from VIZ Media (first published in Shonen Sunday magazine in Japan) is none of those things. Instead we have a female vampire who’s flirty, energetic, and obviously knows more than they’re letting on, and the love interest is a young male teen complete with naivety and a boisterous personality. The power dynamic and age gap is obvious from the offset, but that’s kind of the point and also plays into the comedy. Ko is a well-meaning lad, and when he bursts out that he wants to become a vampire, it’s the same kind of energy that a kid gets when he just discovers a new toy or hobby to try out, and Nazuna obviously doesn’t take him seriously, but that doesn’t mean she isn’t going to stop sucking his blood. The two play off each other very well, and despite being so different (both in personality and species), it’s a unique dynamic that we don’t usually get from these sorts of stories, that makes the first volume so fascinating.

Vampires have often been used as a metaphor for so many things since their conception, from the upper class in Dracula, to a plague metaphor in Guillermo del Toro’s The Strain, or just for the struggles of growing up like in Buffy the Vampire Slayer. Sex is also a common metaphor and Call of the Night leans heavily into this, not only because of how vampires are made in this universe but also how Ko’s giving of blood is presented. Nazuna comes across like a prostitute in that she only works at night, she entices her victims by promising them a good night if they join her company, and she keeps Ko (and other people she feeds off) at arm’s length for understandable reasons. If that is the metaphor Kotoyama is going for (I’m obviously just basing this on the first book) it’s an interesting take, and one that’s also done with sympathy. Nazuna isn’t shown as a helpless victim of circumstances, she seems happy overall with who she is and what she does, but the audience sees how grim her room is, and how out of touch with technology she is, with little mention of any friends she may or may not have. It’ll be interesting to see where the author goes with this character and how the mythology of these vampires continues to grow.

Another thing I really liked is Ko; he’s an instantly likeable protagonist and not just because he’s an unusual lead for this type of vampire genre. His suffering from insomnia is not only the perfect excuse for him to go out at night, but also something that many people do suffer with, and his detachment from his life and school can be read as depression. The fact that we do not get any chapters set during the day (except flashbacks) or even see his parents shows how cut off he is from his friends and family. It’s effective and generates sympathy easily from the audience.

Kotoyama is a mangaka that may not sound familiar; their only other work so far is a series called Dagashi Kashi which did get anime adaptation (which was licensed by Anime Limited but then never released) back in 2018, but the manga itself isn’t licensed in the UK. Call of the Night is their second major series, and I’m super impressed by not only their storytelling but also the art style. On the service it’s very shonen-esque; you can see inspirations from Tite Kubo (Bleach), Takeshi Obata (Death Note) and Hiroyuki Takei (Shaman King) in the character designs. I can imagine Nazuna being very popular with cosplayers due to her simple yet effective costume design. But Kotoyama’s talent goes beyond the cast: the night streets feel desolate, dark and worn and you can see why Ko is fascinated by it but the reader can’t shake the fact that the night time is (or at least should be) very unsafe for someone to walk alone in the streets. I will say though that the cover art sells something quite different to what we get in these pages; it’s nice art, but the framing, character expressions and positioning of them sells a more dark and serious series than the supernatural comedy that Call of the Night actually is.

Translation is provided by Junko Goda, who does a very good job at capturing the youthful energy of Ko, whilst also subtly showing Nazuna’s age with her use of language and how she speaks to him. I got a good laugh when she uses the word ‘trollop’, ‘cos it’s not a common word used in comedy.

If you’re looking for an interesting take on vampire romance, without the stereotypical ‘brooding’ vampire, then Call of the Night may surprise you. It’s a volume full of promise for a fang-tastic new series to come. 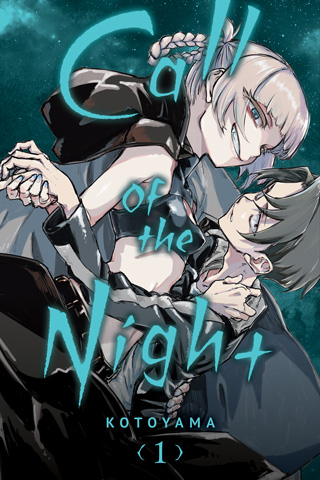