Reading the title, you might think at first that Chainsaw Man is some kind of strange superhero story. While the series falls more into the supernatural category, you can see certain superhero elements creeping in.

Created by Tatsuki Fujimoto (Fire Punch), the story follows a guy named Denji. His father was in debt to the yakuza and hanged himself. To make money, Denji has had to sell an eye, a kidney and a testicle, but his main way of making cash is by hunting devils, which come in all shapes and sizes. Strangely, he does this with the help of another devil, or rather a devil-dog named Pochita, who has a chainsaw-like nose. Denji and Pochita have a contract with each other which, as we shall see, comes in useful.

The yakuza decide that they would rather use the power of devils instead of making money by getting someone to kill them, so they get a devil who can make zombies to kill Denji and dispose of his various body parts in a dumpster. This is where Denji’s deal comes into force. Denji is brought back to life by Pochita in a completely healed body, including the parts he sold off and, in return, Pochita gets to see Denji’s dreams. Denji awakens with a newly reformed half-human, half-devil body but with Pochita gone, except for one aspect. A ripcord now protrudes from his chest.  By pulling it, chainsaws come out of his arms and head, turning him into the “Chainsaw Devil”.

With his new powers, Denji kills the devil that murdered him originally. Soon afterwards, a group of government-appointed devil hunters arrive, who were meant to kill the devil first. The leader of the group, Miss Makima, decides to take Denji in as a kind of pet, and upon seeing his powers, gives him a job as a Public Safety Devil Hunter working in Tokyo. Denji takes the job for several reasons: first, he is now earning more money and eating more food than he has ever done; second, he has fallen in love with Makima; and third, Makima has threatened to kill him if he doesn’t take the job on.

Denji thus ends up having to kill more devils for a living using his powers. As well as working under Makima, he is also junior to another hunter, Aki Hayakawa, who hates Denji for the seemingly shallow reason he took his new job; and Power, who is a fiend – a human corpse taken over by a devil and having that devil’s personality – with the power to turn her blood into weapons.

The main feature in this Weekly Shonen Jump series is the action sequences. There is plenty going on in the battles between the hunters and the devils. The devils can take on many hideous guises. The devils featured in this first volume include ones depicted as bats, zombies and, for some reason, tomatoes. Then you get to the fights themselves with Denji transformed into his chainsaw guise, complete with his chainsaw head which not only has the massive blade coming out of his face, but his whole head turns into the engine of the machine. He does look cool.

Perhaps the ridiculousness of the story helps to add comedy to the whole thing. Denji is rather laid-back for most of the time, only really springing into action when it is needed. This stands in contrast to Aki and forms an odd couple/mismatched cop buddy scenario between the two characters. The other comic aspect is that after falling in love with Makima, Denji becomes increasingly more lecherous. For example, the thing that Power loves most of all is her missing pet cat Meowy. Denji is not interested in helping her find it, but instantly changes his mind when Power offers him the chance to touch her breasts in exchange for helping her. The humour is thus rather base at best.

Because of this, the art feels better than the writing. Visually, the action and the fighting make this manga appealing, but as the series progresses we can expect to see more depth to the plot being added. As for the translation, there appears to be nothing standing out that’s troublesome in Amanda Haley’s work on this volume.

Chainsaw Man has some things going for it and hopefully may well build up from a promising start.

Read a free preview of Chainsaw Man at the publisher’s website here. 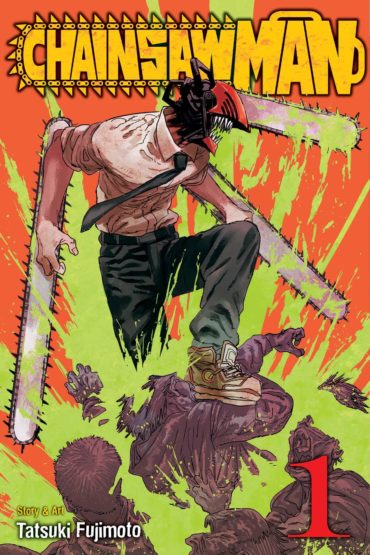