Set during Japan’s Taisho period (1912- 1926), Demon Slayer: Kimetsu No Yaiba follows the adventures of Tanjiro Kamado, a young lad who lives up a mountain with his family, supporting them by selling charcoal to the nearby village and running odd jobs for the villagers. After staying out too late one time, he is persuaded by one of the villagers to take lodgings in their house and wait until sunrise to head home, as it is said that dangerous demons roam the land at night, looking for human flesh to feast upon.

While Tanjiro hopes that these demons don’t exist, he is unfortunately proved wrong, as he returns home to find that his entirely family has been slain overnight, with the only survivor being his younger sister, Nezuko. However, it is revealed that Nezuko has been turned into a demon, and while she recognises Tanjiro enough not to kill him, she soon attracts the attention of the Demon Slaying Corps, a secret organisation that has been tasked to eliminate the demons. After protecting Nezuko from the demon slayer that has been sent to kill her, Giyu Tomioka, Tanjiro is recognised for his potential and is offered the chance to become a demon slayer himself, if only he can pass rigorous training and the trial of the Final Selection. With the goal of ridding Nezuko of her demonic curse and turning her human again, Tanjiro sets out on his path to becoming a demon slayer. 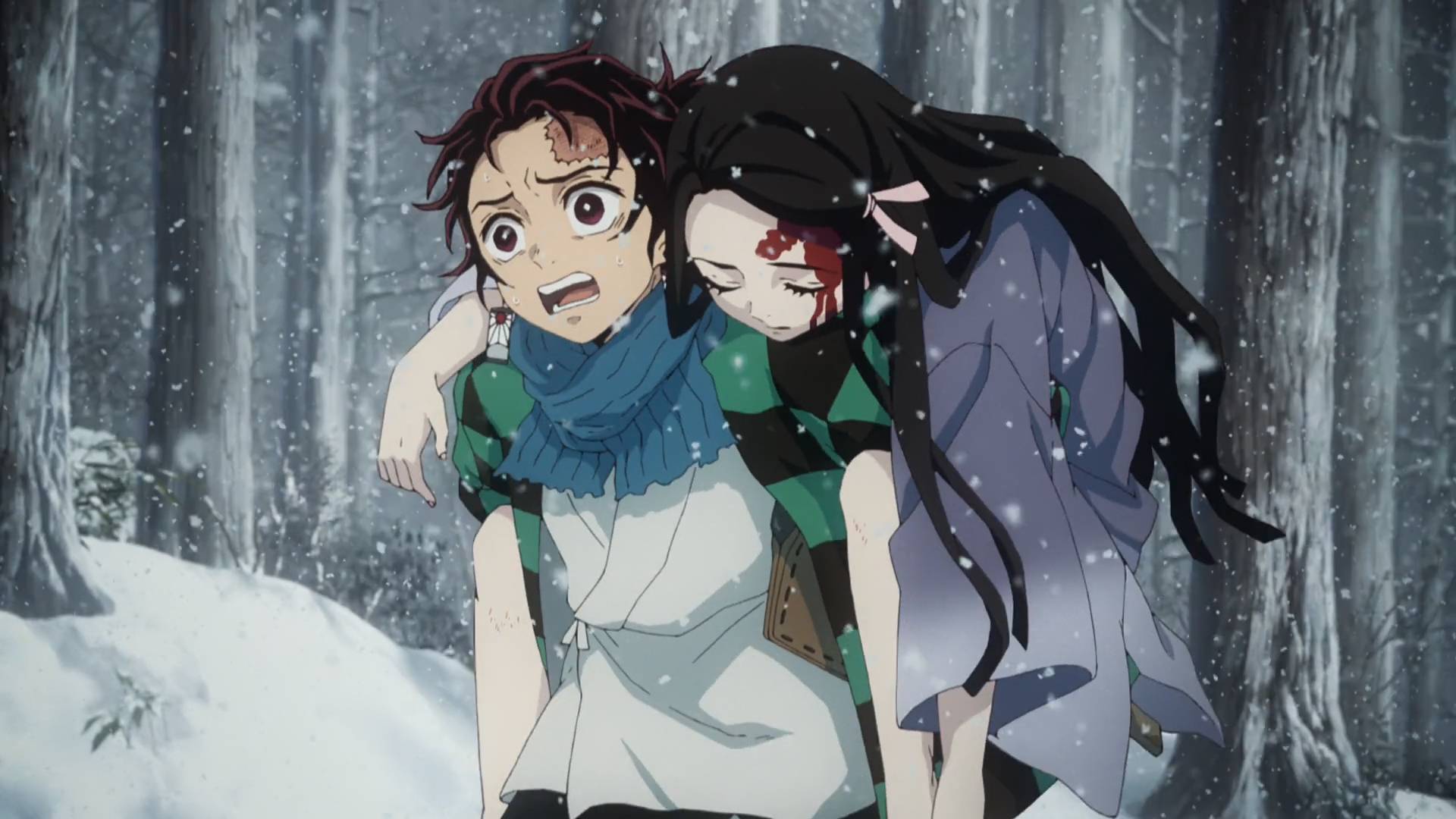 Adapted from the manga by Koyoharu Gotouge and animated by Ufotable, Demon Slayer: Kimetsu no Yaiba feels like an attempt at creating a blockbuster series out of a shonen manga, with beautiful and stylistic visuals, high-octane fight sequences and a simple but solid storyline. If you’ve seen other anime by Ufotable then this praise will sound very familiar, with them having become known as a studio that can churn out very lavish productions as it has with its work on Type-Moon’s Fate franchise. And indeed, just on the visuals alone you could immediately say that this is going to be good, with snowy hills and forests ripe for their expert use of CG particle effects, and the way they give the semi-supernatural sword powers (activated through what the show calls breathing techniques, which map across to elements such as water or lightning) a moving ukiyo-e art style that’s like nothing I’ve seen before. 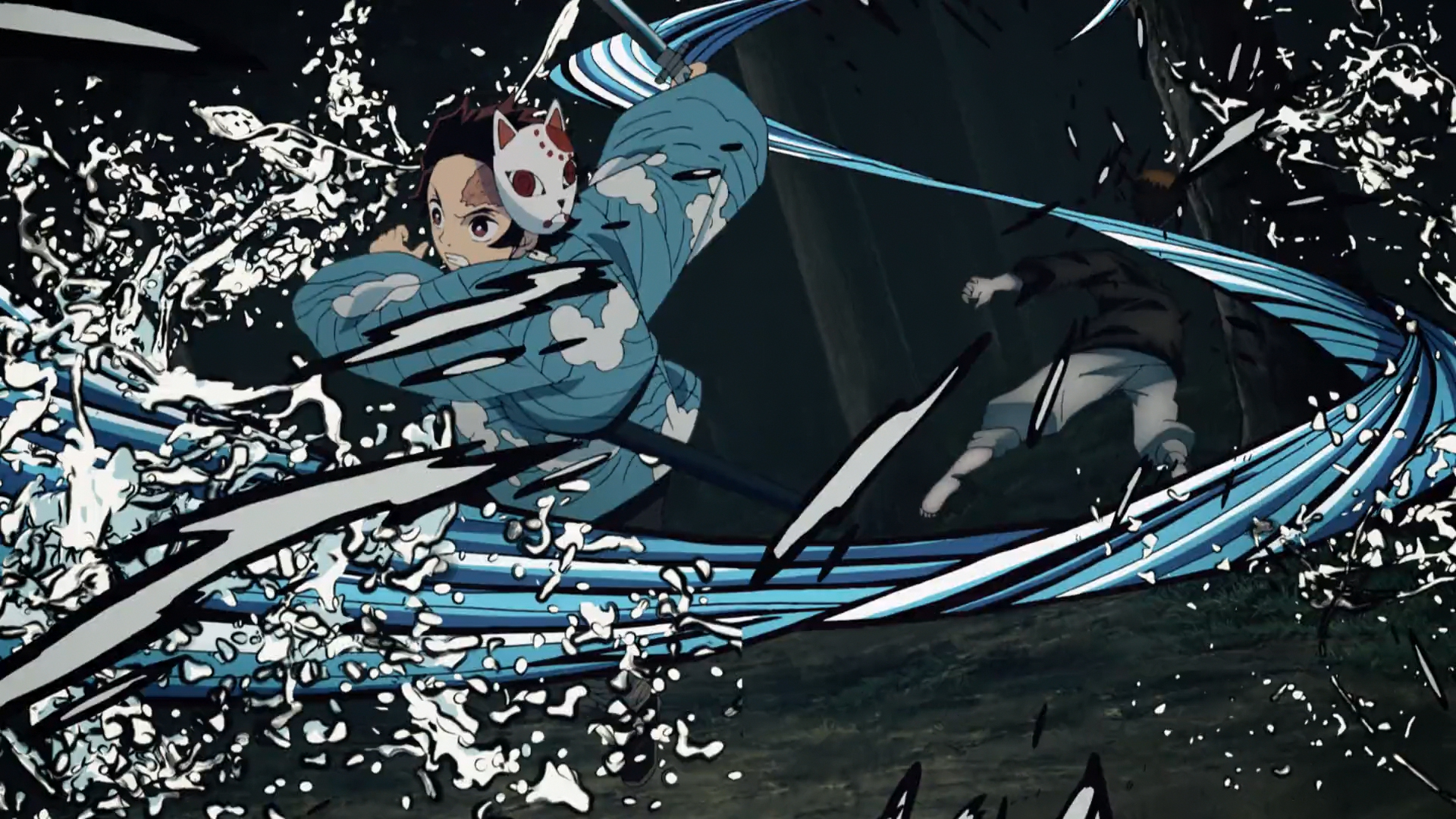 However, despite this visual polish, the series tends to fall short in a lot of areas where its shonen manga origins really hold it back. This is evident from the very first episode, which comes off as an awkward introduction that could have been a bit neater in its structure to make things flow better, from removing the opening scene which is repeated later in the episode, to tidying up the transition to the credits.

This leads into your typical training and (kind-of) tournament arcs, which thankfully pick up the pace and get out of the way fairly quickly. While both of these take up a few episodes, it feels just right, in that you get to see Tanjiro grow a lot over what seems a short space of time (but is actually two years in terms of the story), and there’s not a moment of screen time wasted, giving a perfect example of how these specific shonen tropes should be handled. There’s also a poignant tale to be told in the Final Selection, as Tanjiro seeks revenge against the demon that has plagued many of his master’s students.

Unfortunately, most of the main cast of characters are one-note, and in typical shonen style shout and scream a lot. Due to this, and despite some of the character growth shown in these early episodes, Tanjiro doesn’t feel a very compelling main character a lot of the time. His obsession over his sister can be a bit overbearing, and he likes to make a statement of protecting things even if they don’t need protecting. It’s not all bad though, as the show does address these as his weak points, and he does actually have his moments, just not when he’s shouting “Nezuko!” all of the time. 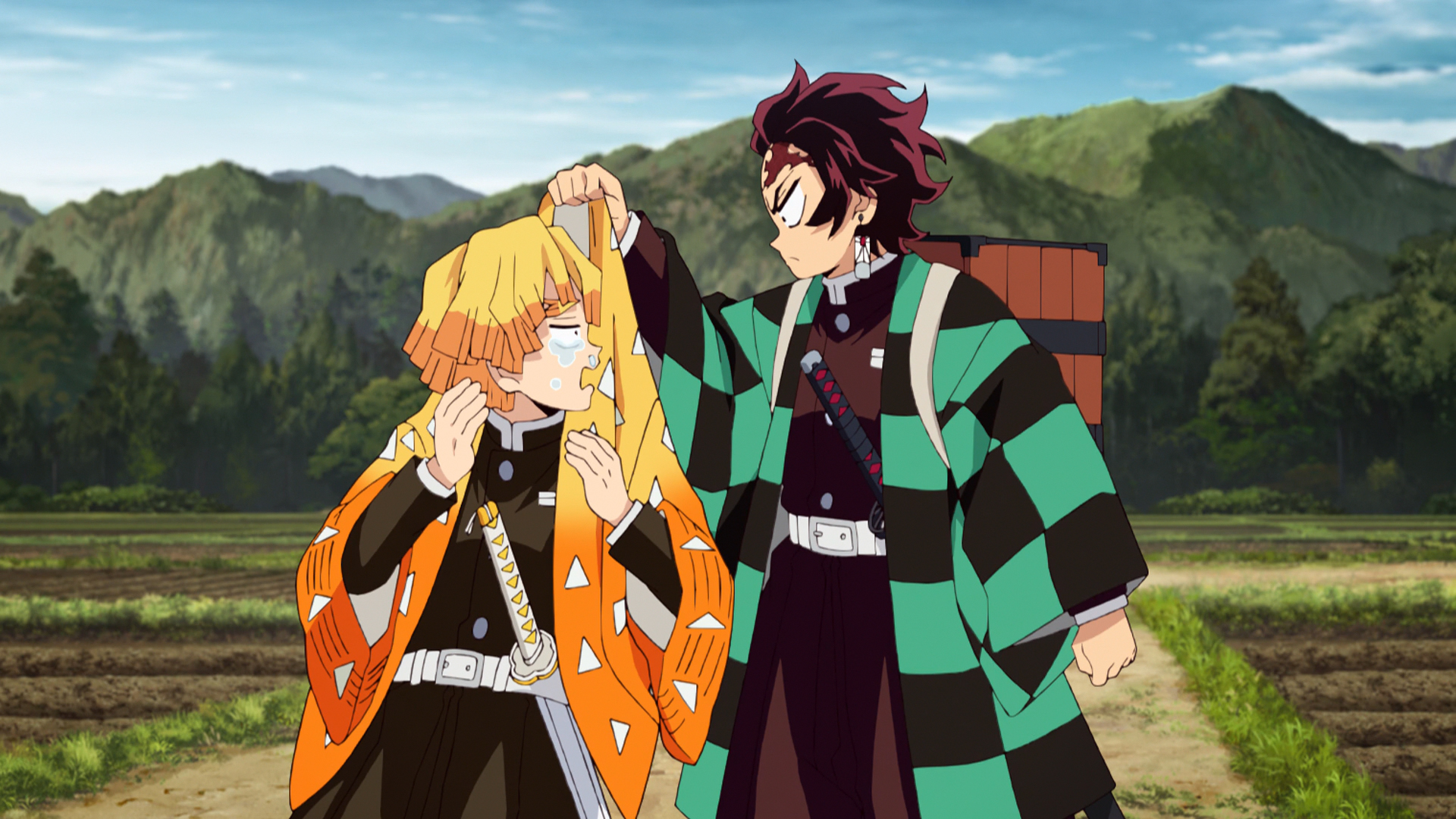 Zenitsu, however, is even worse. Introduced towards the end of this set of episodes as the second of the main trio of demon slayers that the series follows, Zenitsu seems to exist just to be annoying. He’s a whingey, obnoxious, and clingy idiot and while he’s meant to bring some comic relief into the show, it goes so far into these facets of his character that it acts as a turn-off. Inosuke, the other member of the main trio, who conceals his features beneath a boar’s head, has some similar problems, but they aren’t quite as bad as Zenitsu’s.

It’s surprisingly Nezuko who is the most compelling character, as not only does she have being a demon to contend with, which gives her considerably more depth, she just completely steals the show whenever she emerges out of the wooden box that Tanjiro carries her around in to protect her, kicking some serious butt as she uses her new-found strength to tackle the demons that Tanjiro can’t. 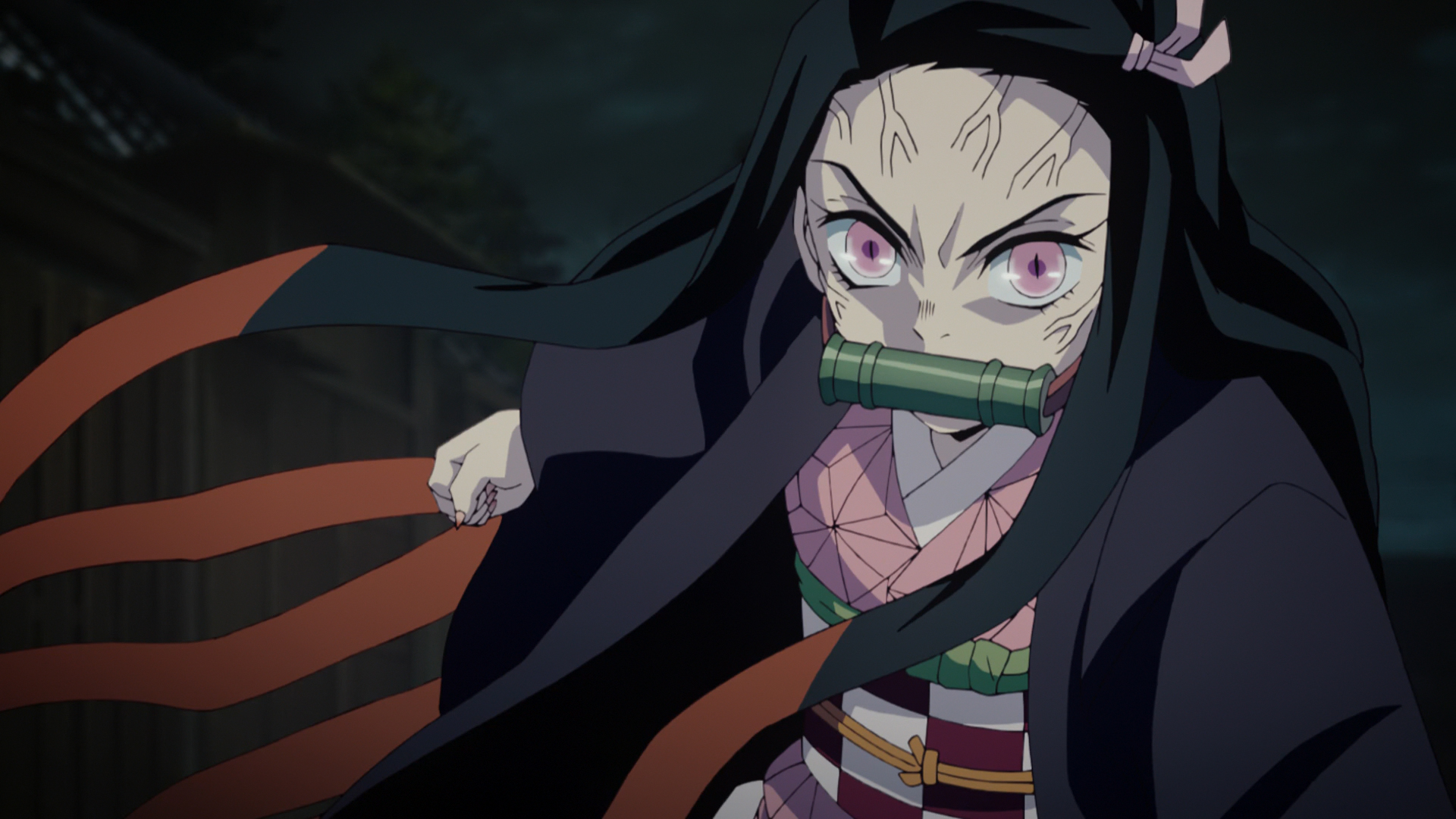 She adds an extra dimension to the action, giving us some frantic close combat to pair with the more calculated and strategic swordplay favoured by Tanjiro. Ufotable have done a great job with the fight sequences in general though, with some tense and gripping cinematography that leads into some smooth animation. It’s not quite as big budget as the likes of their work on Fate, but still really delivers a punch.

It also helps that the designs for the demons are particularly good as well, with each of them being centred around a particular gimmick that lends well to making Tanjiro think of a strategy to beat them, from one demon that can sink into the ground to one that uses small drums embedded into its body to manipulate the gravity and space around it. While of course you expect Tanjiro to win in the end, they all sure give him a run for his money, and he often gets pretty beat up. 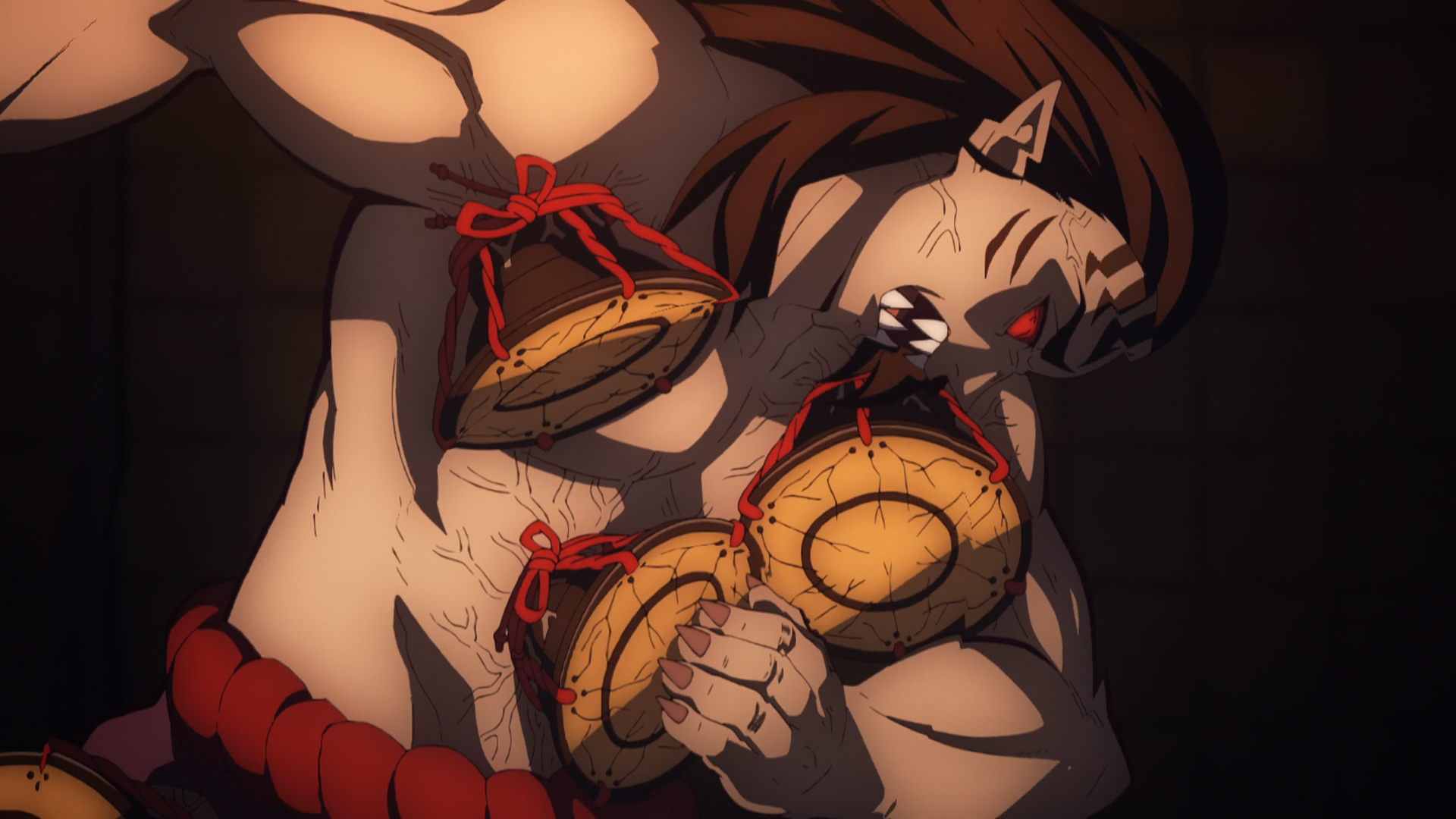 While the action has plenty of power to carry the narrative, it is a shame however that the show feels a constant need to telegraph what is going on, as the characters constantly narrate what they are doing. While it is a common thing to do in a shonen series, it just really stands out as unnecessary here, treating the viewer like they aren’t smart enough to understand what’s happening, when it’s clear enough from the on-screen action.

Despite some of the issues with the scripted dialogue being full of your typical shonen-style shouting, I found the voice acting to be rather good across the board in both English and Japanese. The English dub gets the main characters down well and closely matches the tone of the Japanese voice acting, particularly with Zenitsu (voiced by Aleks Le) and Inosuke (voiced by Bryce Papenbrook). On the Japanese side however, I gravitated more towards the older characters such as Tanjiro’s teacher Urokodaki (voiced by Houchu Ohtsuka, who has played characters such as Lt. Tsurumi in Golden Kamuy and Hakurou in That Time I Got Reincarnated as a Slime) and the big bad himself, Muzan Kibutsuji (voiced by Toshihiko Seki, who has played characters such as Detective Maniwa in Paranoia Agent and Senketsu in Kill la Kill). 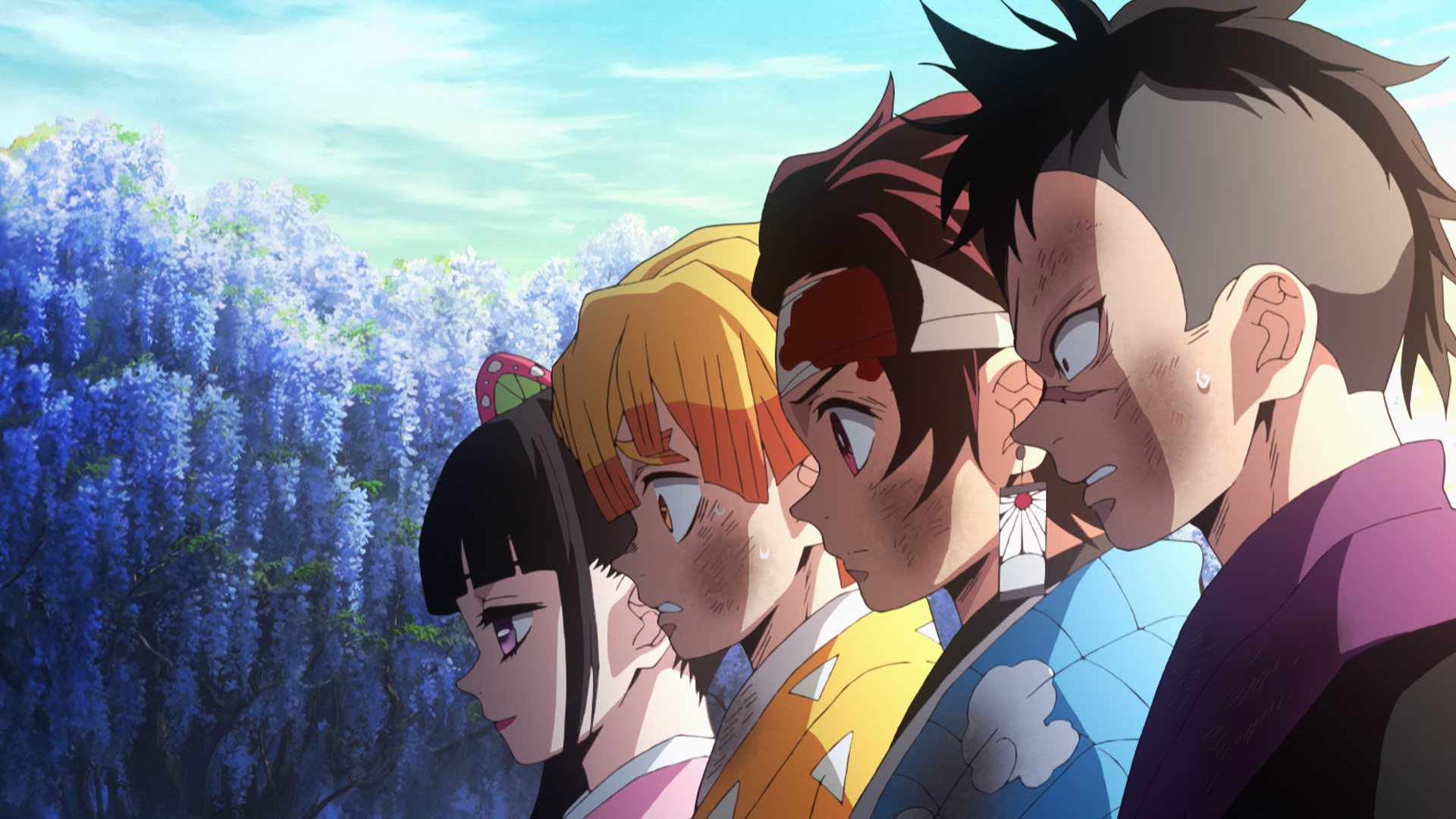 The series boasts a fantastic soundtrack composed by Yuki Kajiura and Go Shiina that’s full of very evocative and traditionally Japanese-sounding pieces that sit extremely well with the setting. It’s very good at setting the overall tone of each scene, especially when combined with some great sound effects work. You’ve also got the now iconic opening theme, Gurenge performed by LiSA, which is an absolute banger of a track that was rightfully picked as the best opening theme of 2019 in our awards that year. LiSA also collaborates with Kajiura under the composer’s FictionJunction collective, featuring on the ending theme from the edge, pairing LiSA’s strong vocals with Kajiura’s iconic rock-infused neoclassical sound.

Anime Limited’s release of this first half of the series features the first thirteen episodes with Japanese and English audio options and English subtitles, packaged in a really nice-looking collector’s box along with a 20-page booklet and 6 art cards. On the discs you’ll also find audio commentaries for Episodes 1 and 11, and the usual clean opening and ending animations. 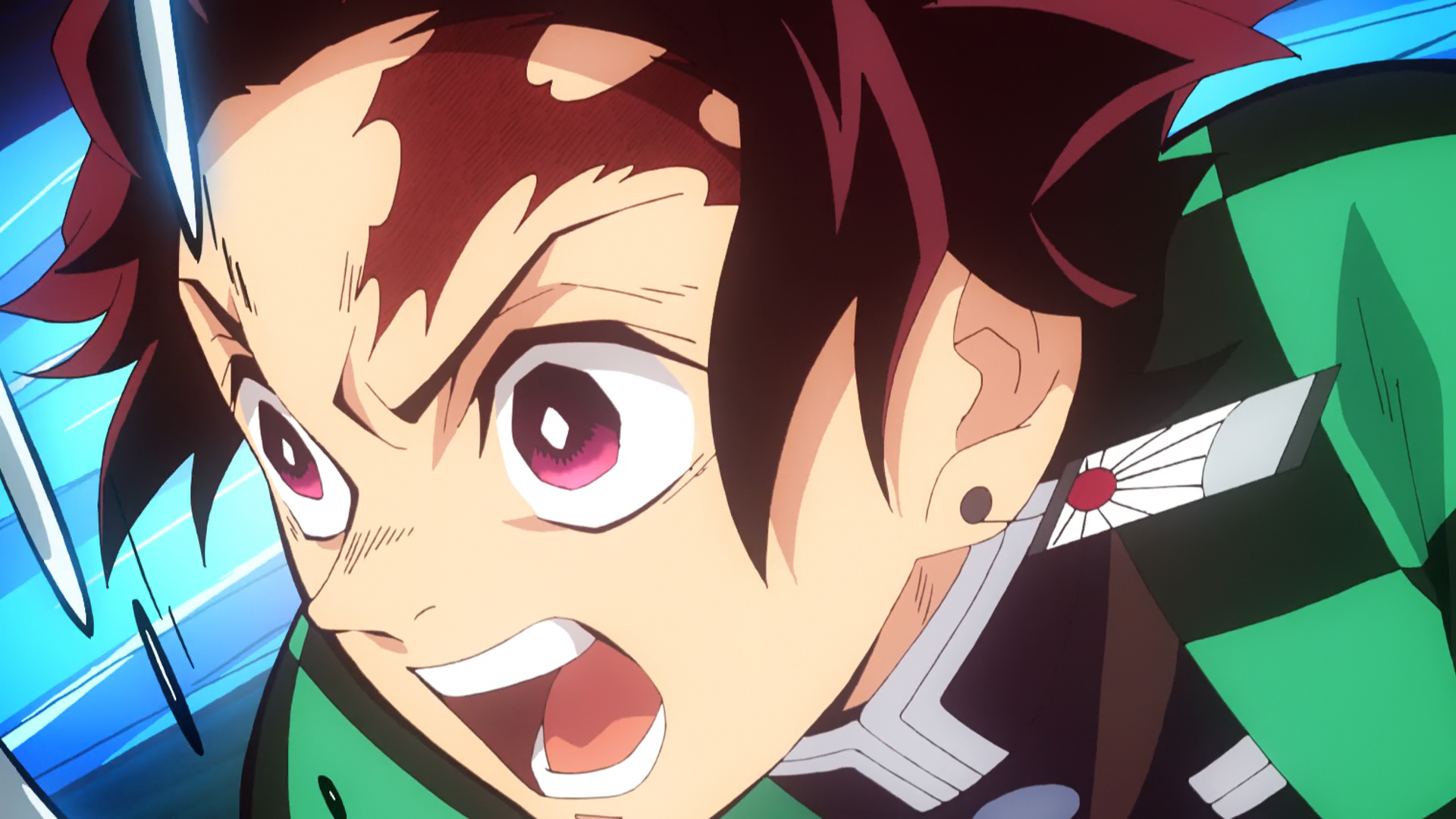 Overall, I ended up having a lot of fun with this first part of Demon Slayer: Kimetsu no Yaiba. While it does have its faults, particularly with the annoying cast of characters and in the way it tells you what’s going to happen before you see it, Ufotable manages to take the typical shonen formula and give it their trademark cinematic touch. It has some outstanding visuals and audio and is packed with tense, gripping action sequences that really pack a punch. If you do enjoy shonen action shows, then I would recommend picking this one up. 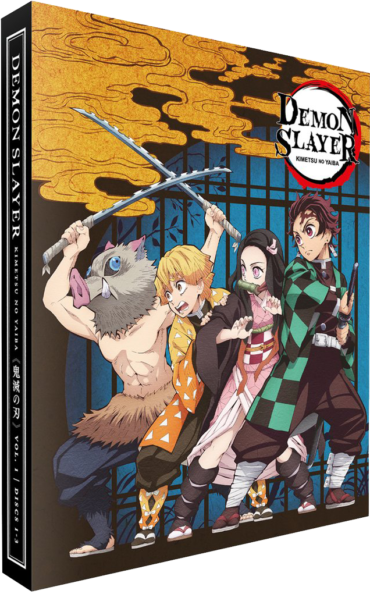