Having survived a rather dramatic training camp, Saeko and Miwa’s relationship has gone from strength to strength. However, that doesn’t mean there aren’t plenty of issues waiting to trip them up, as we see in Volume 3 of How Do We Relationship?

This volume of the yuri romance series opens with Miwa going through some of Saeko’s old photo albums, getting a glimpse of her girlfriend as a child. But it doesn’t take long for Miwa to notice that there are no pictures of Saeko in middle school and upon questioning her about this, Saeko dodges the question. Worse still she tells Miwa that she didn’t have any friends in middle school, which Miwa finds hard to believe, given how easily Saeko can get along with anyone around her.

After a trip to a nearby fast-food restaurant, Saeko is quickly proven to have lied to Miwa when she runs into a group who were friends with her. Even being caught out doesn’t lead Saeko to open up however, instead, she refuses to acknowledge that she really knew them.

Things only get worse when Miwa and Saeko have a falling out in the bedroom. When sleeping together, Miwa is always the one on the receiving end and she wants to make Saeko feel good too, but Saeko can’t think of anything worse and tries adamantly to put Miwa off.

It’s clear to both us as readers as well as Miwa that Saeko’s refusal isn’t because she doesn’t want Miwa’s affections, but rather that there is some deeply rooted trauma that she needs to overcome. The trouble is that Saeko won’t open up and entrust herself to Miwa, which makes things all the worse.

Elsewhere in the volume, we get a glimpse of Miwa’s time in high school and find out how she discovered she was gay. We also meet her first crush, which is especially important since at the end of this book Miwa is reunited with her at a high school reunion. It’s nice to finally have some character development for Miwa away from Saeko and I think this will serve us well going into the next book.

I admit that having just come off the back of reviewing Sweat and Soap, the fact that the cast is so unwilling to just talk through their problems in How Do We Relationship? bothered me more than it usually would. The drama in this series is starting to feel somewhat forced and, while I suspect Saeko might not want to open up about her past, these characters have been in this relationship for quite a while now.

Maybe what’s truly getting to me is the fact Saeko even admits that she knows she and Miwa can’t continue to go on in this uneven relationship, but no progress is made toward resolving the issue in this volume. I can only hope that next time around things will begin to move in a better direction, but that remains to be seen (especially if the next arc revolves around Miwa, as the ending suggests.)

Of course, it’s not all bad and if you’ve been enjoying the series up until now, then you’ll likely be without many complaints. Mangaka Tamifull’s art is still busy but attractive and the cast is very expressive. Things have only gotten better over time as Tamifull has stopped cramming quite so much detail into the smallest panels, which is a good change in terms of being able to follow what’s happening from scene to scene. In the afterword the creator also promises to include more scenes of the girls playing in their band since they are supposed to be in the band club.

How Do We Relationship? Volume 3 comes to the West thanks to VIZ Media and continues to be translated by Abby Lehrke. The translation reads well with no issues to note. Volume 4 of the series is currently scheduled for a release in November.

Overall, How Do We Relationship? Volume 3 is on somewhat rocky ground as it struggles to resolve any of the issues piling up between the couple, but I’m optimistic that the next book will make some headway there. 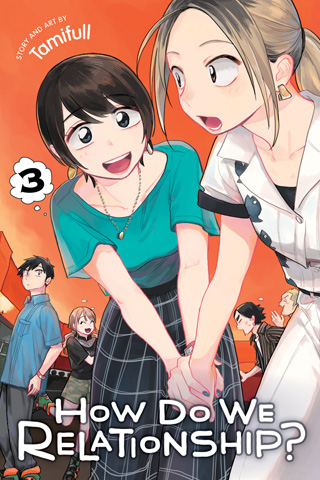 Title
How Do We Relationship? Volume 3

How Do We Relationship? Volume 1 Review

When Miwa first meets Saeko, the latter compliments her on her wonderful breasts. It’s a meeting like no other, but the two form a firm friendship that soon evolves into something more… With this debut volume of How Do We Relationship? we find out the series is everything yuri fans have been waiting for.