Streaming service Funimation and US distributor Aniplex of America have announced plans to simulcast the second season of Demon Slayer: Kimetsu no Yaiba, covering the Entertainment District Arc (Yūkaku-hen), when it airs later this year.

The series will continue from the events of the theatrical film Demon Slayer: Kimetsu no Yaiba the Movie: Mugen Train, that was recently made available for theatrical and digital platforms in the United Kingdom and United States (the United States viewers are also able to stream the film on Funimation).

The second season will simulcast on Funimation for the United Kingdom, Ireland, United States, Canada, Australia and New Zealand territories. A trailer is also available, but may contain spoilers if you have yet to watch both the first season and the Mugen Train film.

Studio Ufotable will return to animate the series along with director Haruo Sotozaki, character designer Akira Matsushima, and music composers Yuki Kajiura and Go Shiina. The story is based on Koyoharu George’s manga series that has serialised on Weekly Shonen Jump for 23 volumes across 2016 to 2020.

Demon Slayer: Kimetsu no Yaiba first aired in April 2019 and was licensed for home video by Anime Limited with two collector’s edition Blu-ray sets, the second half of which is currently scheduled for release on 16th August 2021. Aniplex of America have the distribution rights to the franchise for the United States and have released the first season across two limited edition Blu-ray box sets exclusively through Rightstuf. Mugen Train is also available on Blu-ray in Japan with English subtitles from Aniplex Japan. 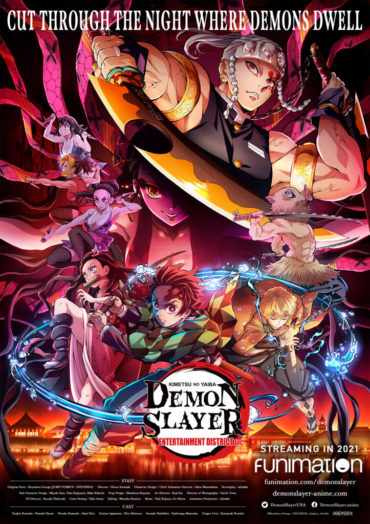