With the release of Fairy Tail: 100 Years Quest Volume 7, we’re now over 50 chapters into the series. In some ways, it feels as if not much has happened in that time, but in truth, the cast has been through a lot already. With the end of the current arc fast approaching, it’s time to find out how the group are getting on!

Battles continue to rage across the Wood Dragon’s back and Natsu and co. have found themselves facing off against the five God Seeds that inhabit Aldoron (the Wood Dragon). It’s do or die for our heroes as they struggle to bring Aldoron under control and, having defeated members of the Diabolos guild in the previous volume, everyone is weakened.

While Natsu fights off the main God Seed, Wendy finds herself up against Doom who proves a powerful adversary after Wendy used so much magic in her previous fight. Doom can emit special spores that will cling to an enemy and keep them immobilized; if they stay like that for 60 seconds then that person will die. In Wendy’s case, her feline companion Carla soon finds her life on the line!

Elsewhere, Jellal finds himself up against Gears who can restrict a target’s speed and causes illusions – but there’s a catch. How well Gears’ magic works depends on how much guilt his target harbours, which in the case of Jellal is quite a lot, so this quickly proves a difficult match-up.

Volume 7 of the series finally brings an end to the Wood Dragon arc that began in Volume 3! It has been a long arc with plenty of ups and downs, but this instalment is certainly one of the better entries. Natsu’s fight is engaging and it’s a lot of fun to watch him pitted against such a strong opponent, but I think what I found more interesting was Jellal and Gears’ storyline.

As a character, Jellal has always held a lot of anger and guilt toward his past actions and it’s for this reason that, despite how often he’s tried to make amends, he still stays distanced from those he loves. His fight with Gears forces him to finally face up to some of the feelings he’s buried deep down and afterwards we’re left with the sense that he can finally move forward with his life.

While this volume spends most of its time in battles, it does also take the chance to reaffirm some of the budding relationships between the cast which I and many longtime readers of Fairy Tail will appreciate. We’re also treated to the appearance of Brandish, who I’m always happy to see as she’s quickly become one of the better characters introduced toward the end of the original series.

As far as the end of an arc goes, this has been a satisfying one. There are enough questions left where I’m eager to see where things go next, but I’m also just happy to be done with the Wood Dragon storyline. There is something really refreshing about a long-running shonen bringing one dramatic arc to an end before embarking on the next.

Fairy Tail: 100 Years Quest Volume 7 comes to the West thanks to Kodansha and continues to be translated by Kevin Steinbach. The translation reads well with no issues to note. Volume 8 of the series is currently scheduled for release in September.

Overall, Fairy Tail: 100 Years Quest proves another entertaining entry in this vast franchise as well as a satisfying conclusion to this long-running storyline. With a new arc ahead of us I can’t wait to see what’s in store for Natsu and his companions next. 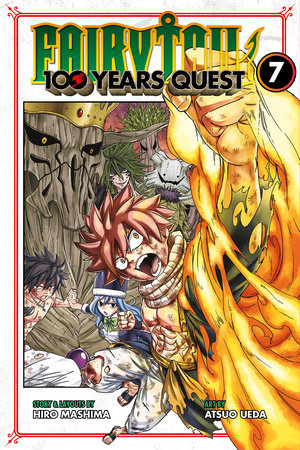 With two new volumes of Fairy Tail: 100 Years Quest, we charge into the next arc which sees Natsu’s group united with old friends and facing one of their toughest challenges yet – fighting each other!