In Volume 9 of Fairy Tail: 100 Years Quest, Natsu and co. found themselves transported to the parallel universe of Elentear, after a brief stop in the universe of Edolas. With the fate of multiple universes at stake, our cast finds themselves facing some of their most difficult fights set in a world that’s not even their own. Will they prevail? Let’s find out!

Although Natsu’s whole party takes centre-stage on the cover, it’s undoubtedly Gray and Lucy who steal the show in the chapters collected here. The two face off against Mimi and Hakune, two powerful opponents that they already lost to in Volume 9. But as the two rightfully put it, “Fairy Tail never loses to the same people twice” so the wind is surely blowing in their favour.

Lucy’s fight against Mimi is a contest of endurance more than one of skill and strategy, but things are more tricky when it comes to Gray and Hakune. For this fight, Hakune tries to trap Gray in an illusion, one where Ur and his father are still alive, and he and Juvia have a small child of their own. Gray recognises this is a dream or hallucination immediately, but with everything he’s ever wanted right in front of him, it’s difficult to resist the allure to simply stay there forever…

As these fights wear on, the magic on Elentear is only getting more and more out of control which hastens the destruction of the universes. Luckily for all involved, Wendy is beginning to devise a plan that might prevent the calamity and allow everyone to return home safe and sound.

Back when I reviewed Volumes 8 and 9 of Fairy Tail: 100 Years Quest, I talked about how having this multiverse storyline might lead to the series getting increasingly silly. Not least because of the power creep and new abilities the cast had been pulling out so far. However, having now read Volume 10, I think author Hiro Mashima does deserve some credit for keeping things relatively restrained.

Ultimately the way the cast saves the day is silly, but it’s still within the general realm of shonen silliness and not as over the top as I feared it would be. It also helps that in the fights we see throughout this book, no one pulls out any new magic and instead fights with their current abilities and strategies. Between this and the fact the multiverse arc comes to an end by the end of the book, I’m left feeling satisfied with how it’s gone. It has ended up being one of the shorter arcs so far, but again that works in its favour in terms of not having the time or opportunity to get in over its head.

It’s also nice not to have Natsu being the saviour for once. Fairy Tail has always been pretty good for giving ample development to all the members of its extensive cast, but I think in this arc in particular Natsu has successfully taken a backseat while Lucy and Wendy get more of a chance to shine.

Fairy Tail: 100 Years Quest Volume 10 comes to the West thanks to Kodansha and continues to be translated by Kevin Steinbach. The translation reads well with no issues. Volume 11 of the series is scheduled for an English release in November, so not too much longer until we get to find out what’s next for our cast.

Overall, Volume 10 of Fairy Tail: 100 Years Quest successfully brings the multiverse arc to a close in a way that’s interesting and manages to avoid getting in over its head. Now the series continues onward into what I hope will prove another entertaining arc. 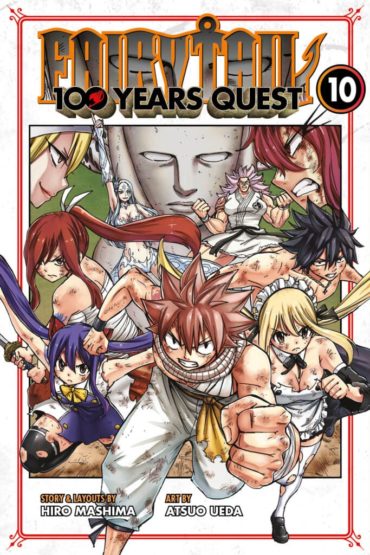