High-schooler Wataru Toda is a film buff and he’s delighted when – through a chance encounter – he discovers that Chiharu Saeki (in the same year) shares his obsession. So when Saeki suggests going on a pilgrimage of sorts in the summer vacation, visiting all the locations featuring in his favourite film, The Beach in Broad Daylight, Wataru doesn’t hesitate to agree. Although…some weeks earlier, he felt unsettled when Saeki told him calmly but straightforwardly that he likes him. Overcoming his initial surprise and confusion, Wataru doesn’t reject Saeki (he already knows that he likes him as a friend). But does ‘like’ mean something far deeper to Saeki than Wataru? And will that spoil their friendship?

They set off on their summer pilgrimage and the more time they spend together, the more Wataru realizes how much he enjoys being with Saeki. But a visit to Higashimura Park (another landmark in the film) awakens memories for him from several years ago when he helped a lost child find their family. The final place on their itinerary is the beach with a landmark rock – but the weather worsens, the trains stop running and they have to call off their trip. “I really did want to go today,” Saeki tells Wataru via smartphone and the ever-optimistic Wataru replies, “Let’s try again…once school starts.” When Saeki doesn’t reply and merely tells him, “Thank you” Wataru doesn’t realize how profoundly what happens next will affect him.

There are a number of familiar high school romance tropes revisited in The Summer of You: the manga begins with a girl confessing her love to Saeki (the popular but unattainable hot guy in the year) and Saeki telling her, “Sorry. I’m interested in someone else.” (A similar scene occurs at the start of I Cannot Reach You.) Wataru, observing from a distance, merely notes, It’s almost like…a scene in a movie. Girls sure love that guy.

The Summer of You is a gentle exploration of how two young people (who just happen to be the same sex) meet, enjoy hanging out together – then have to learn how to communicate on a much deeper level with one another. It’s a steep learning curve as one person’s ‘like’ doesn’t always carry the same weight as another’s. Does Saeki play fair? He answers Wataru’s question honestly – but then when he needs to communicate honestly himself, he is unable to do so. And Wataru comes to realize – too late? – that Saeki’s companionship means a great deal to him. 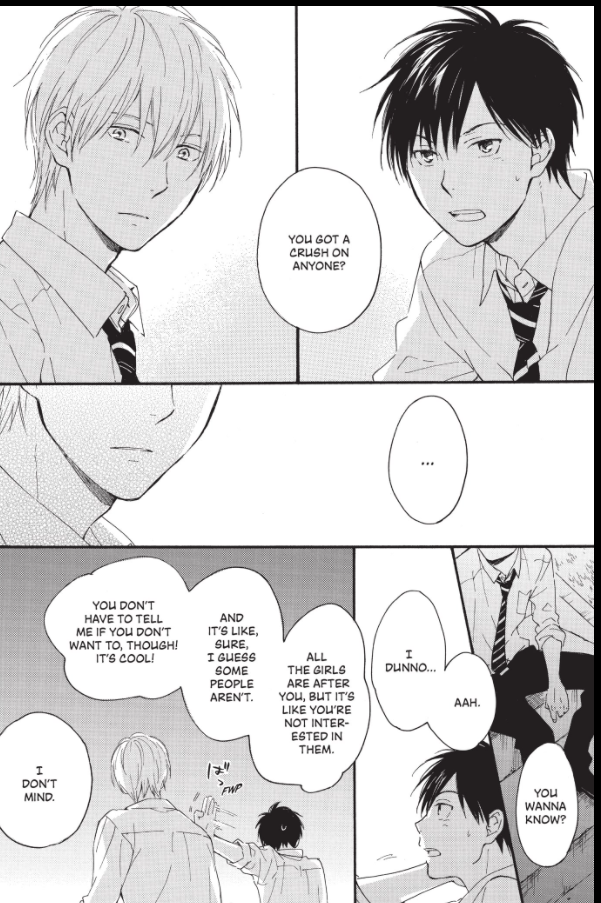 Nagisa Furuya has a gift for drawing characters whose facial expressions and reactions tell us so much more than their words do (she’s especially good at eyes). Her BL manga are understated and subtle; as in real life, the vagaries of the summer weather (in spite of those limpid blue skies in the colour art) play a part in the way the relationship between Saeki and Wataru develops.

At the end of this first volume of two about Wataru and Saeki, Nagisa Furuya writes, “I like drawing summer stories” and the intense shades of blue she uses for the colour illustration and the beautiful internal colour inserts are testament to her skill with colour. This is the first of her BL manga to be translated into English and it reveals her gift for story-telling as well as for characterization, both in her drawings and the interactions between characters (S&N is currently being serialized on Renta! and The Two Lions is coming in print and digital from Seven Seas in December 2021). The shared love of film that unites the two boys adds an intriguing flavour to the story as they visit cinemas and discuss what they’ve watched. This is slice of life in the best sense of the word; there’s a wistful sadness pervading the whole text as the readers, alongside Wataru, come to realize how fleeting the pleasures of summer – and first love – can be.

It’s good that publishers like Kodansha and Yen Press are bringing out a range of BL titles that are accessible to readers of the same age as the protagonists. Even though this has a 16+ age rating, there’s really nothing that could be regarded as unsuitable for a ‘Teen’ rating.

This generous Kodansha edition comes with not one but three bonus stories which are not just a couple of pages each but proper chapters that advance the story of the two young men beyond the end of the first volume and prepare the ground for the sequel The Summer with You. Another bonus is the translation from Jocelyne Allen which aids the story to flow naturally, capturing the to-and-fro of the boys’ conversations very convincingly (it really is all about them and the other characters are very much in the background). There’s one page of helpful translation notes and two delightful pages of afterword by the mangaka herself (her avatar is a little cat). Last of all, there’s a map showing all the places on the boys’ film pilgrimage which is – again – charmingly drawn.

The sequel promises to tell us more about Wataru and Saeki, now university students, passing another summer vacation together. I can’t wait to to see how Nagisa Furuya develops their relationship in the next (and final?) volume, due out in November 2021 from Kodansha.

Read a free extract on the publisher’s website here. 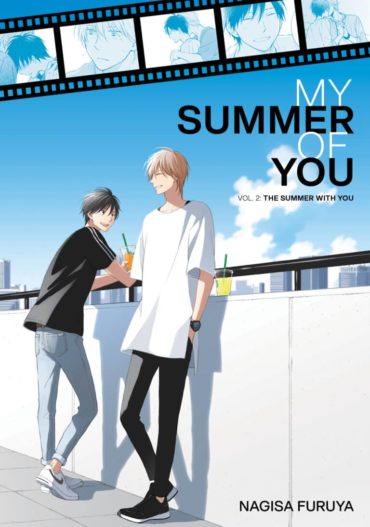