Marika Uruuno is just a normal girl in a normal world. She’ll fall in love normally, get married normally, and have a normal family— or that was the plan anyway. But when she suddenly wakes up in a version of reality filled only with women, she finds herself questioning what exactly “normal” means and why it’s so important to her. And as Mariko discovers something even more precious, she’s faced with a choice; will she find a way back to her previous life, or will she stay in this strange new world?

I’m a little bit torn in writing this review, because I feel that the above synopsis (taken from the Yen Press website) is rather misleading; the synopsis (written similarly on many sites) and the first three chapters of the book seem to be selling one story but the twist that happens halfway through has little to no relevance to it at all. Which makes it awkward for me as I can’t really review this manga properly unless I mention the twist and the themes it brings in, which take up most of the book. So, my advice is if the above synopsis grabbed your attention, or what I’ve said so far has, then by all means stop reading my review and give it a go – it’s a single volume containing the complete story. However, if you’re on the fence about it, or don’t care about spoilers, I hope my review is a fun read either way.

So, for me, the synopsis above grabbed my attention from the get-go, because having a (presumably) straight woman suddenly thrust into a world where only women exist, and having her whole perception of what ‘normal’ is turned on its head, is fascinating. The title and premise have a lot of potential for deconstructing social constructs, especially from the point of view from someone with conservative views: falling in love with the opposite gender, getting married, having children, etc. And the first few chapters start off that way; interestingly, Marika ends up in a world which is very much like hers, but all the males died out in the 1920s, which is a clever way of building a world that doesn’t require too much exposition to get the audience’s head around the rules of this society (or question things too hard like why the yakuza still exist, for example) and also it helps Marika to slip in unnoticed so we can get into the personal drama quicker, finding what ‘normal’ really means to her, rather than getting lost in politics of the new world dynamics. However, for as much as I found it interesting and the amount of potential it has, Marika’s character arc of wanting to be ‘normal’ is resolved so quickly at the end of Chapter 3, to make way for the real meat of the story, which is where the twist comes in.

You may not guess from the cover, or the lack of tags for it on most sites, but this series is actually sci-fi; it features it to the point where I couldn’t help but wonder if the mangaka Hiroki Haruse suddenly started watching Fringe after writing the first few chapters and decided to change course. For those of you who don’t know, Fringe was a 2008 TV sci-fi series co-created by J.J Abrams. It ran for five seasons and heavily featured sci-fi elements from parallel dimensions, extrasensory perception, sensory deprivation tanks, and more…which also happen to feature in this story. Including one particular twist that happens in the last few chapters that is also very similar to a twist we learn about one of the main characters in Fringe (I won’t spoil, but if you’ve seen the show, you can probably guess what it is). Now I’m not saying that this is a complete rip-off of said show; Fringe of course didn’t invent these ideas/tropes, we should have more lesbian-centric sci-fi shows, and considering the history of the world that Marika wakes up in, it makes sense that scientists would look into alternative realities in order to try and save the male-human race, but it does not exactly follow on from the ideas and themes we’re drawn into from the opening chapters. As stated, the arc for Marika is over before it begins, and the sci-fi is barely hinted at the start before it completely takes over. However, saying that, it’s clear that this book is not meant to be a deep dive into the sci-fi genre, it’s a light-hearted adventure that just so happens to have sci-fi elements in it. Its greatest sin is not that it tried to include multiple story elements and genres, but that each idea is very strong on its own, and could have easily made great separate stories if either of them was given the room to breathe and develop, but sadly none of them do.

By now you’re probably wondering why I haven’t said much about the romance in the book, despite yuri being right there in the title, and that’s because the relationship is rather paint-by-numbers. Any interesting conflict that would have come from one of them being from a whole different world is not utilized enough. It doesn’t help that only the first few chapters have any hint of relationship development, as most of the book just has the characters going from plot point A to plot point B once the sci-fi elements kick in. The characters aren’t given enough time to develop either; for example, Marika makes a lot of comparisons to her family and friends in her world, but the audience never gets to meet them, as the story starts just as she ends up in the all-woman world and provides no flashbacks outside of her brief moments leading up to the twist.

The story and art are provided by Hiroki Haruse who has multiple books (some written and drawn, some just the art) but this story was their second series, and the first to be published in English. I will say that the art is quite pretty; the cover and the few colour pages we get are beautiful to look at. They are also fond of using shadows in their work; there’s a lot of generic set pieces (like abandoned caves, science labs and classrooms) that look more dynamic due to their style, so the book is never boring to look at across the story.

The translation is provided by Eleanor Summers, who has provided translations for many yuri/shoujo-ai series including one I reviewed last year (A Witch’s Love at the End of the World) and I Love You So Much, I Hate You, so they’re clearly well versed in this genre. No translation notes are included, however notes from the author and side stories are included in this omnibus.

The Whole of Humanity has Gone Yuri Except for Me has a case of ‘trying to do too much’-itis. It has many good ideas, which is a positive for the mangaka, but sadly they’re within the same story fighting for page time, in the end resulting in all ideas never really feeling satisfactorily developed. If you want an easy-breezy shoujo-ai adventure that is complete (so doesn’t hurt your wallet too much) then this book may hit the spot. 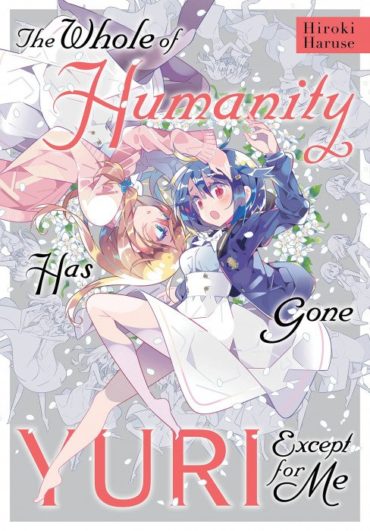 Title
The Whole of Humanity Has Gone Yuri Except for Me