Please note that this review contains spoilers for Volume 6 of Wave, Listen to Me!

In Volume 5, Minare and Mizuho had accompanied their fellow colleague and experienced scriptwriting veteran Katsumi Kureko on a trip to Wassamu, a secluded mountain village to find inspiration for his writing, only to become embroiled in a cultish plot by a deranged radio station owner whose followers refer to simply as “Father”.

The story immediately picks up as the trio decide to join the cult, in all its pumpkin-carving weirdness, in an effort to try and hide their intent to escape, though matters quickly escalate when, as part of the scheme, newcomers must procreate with one of the members, which naturally results in some arse-kicking from Minare who is having none of it.

Meanwhile, the rescue party seen at the end of the last volume break in to rescue the troubled trio but there are further sinister experiments at play as a possessed and rabid Hiromi Saiki tries to prevent Minare from escaping.

Despite Father’s best efforts to coerce co-operation, Shinji Oki, Minare’s former neighbour who was last seen being falsely accused of murder in the wacky occult antics in Volume 3, and who joined the rescue team solely to save his lost love Ritsuko Azohara from the cult’s clutches, manages to land a hit on Father, having been armed with a taser, which makes for quite a satisfying moment.

Whilst all seems well as the cult is disbanded and our protagonists return home, trouble soon brews as the controversy surrounding the cult prompts the Prime Minister of Japan to move towards establishing a new form of business which utilises methods that could affect how Moiwayama Radio Station run their broadcasts.

Volume 6 also dedicates some time to a further character study for Makie Tachibana, the mysterious waitress at Voyager whose life story is rather tragic due to how her brother Tohru became extremely overprotective following their parents’ death. We see the two are now working at Voyager together, though in Tohru’s case it’s likely a ruse to keep tabs on his sister, whose popularity with the patrons has Minare frazzled.

There’s further frazzling as Madoka and Minare meet up to delve deeper into some troubled memories Minare had with her scummy ex-boyfriend, which segues into Moiwayama Radio Station planning for a week-long Intersection special held every February around Valentine’s Day, with Minare as the centrepiece, and the unfolding news of the cult kidnapping being milked for all it’s worth.

The set-up for Volume 7 comes in the form of Mizuho being given a shot at coming up with next week’s programming, having undertaken a role at assisting the cult broadcasts in Wassamu, and looks to using social media messages and Minare’s flare for interviewing to make the show a success. Makie’s relationship with Nakahara also sees some new developments, as he tries to help her find a place of her own, away from Tohru’s watchful eye, only for the two to end up in an intimate situation which caps off the volume.

In terms of character developments, seeing the story refocus on Makie’s troubled life and how it connects with those around her does leave me curious as to how this will play out moving forward, and whether her dynamic with Nakahara will progress or simply stop dead in its tracks. I’m also hopeful that Mizuho will be able to move onwards and upwards in her profession, though with Minare involved, I expect some peculiarities to unfold.

Wave, Listen to Me! has once again been translated by Adam Hirsch, who provides another impressive job, especially with the effort put into the translation notes found at the end of the book.

Overall, whilst I’d say this is one of the weaker volumes I’ve reviewed for the series, it certainly has its moments for character developments but feels more transitionary story-wise. And although the cult escape plot is resolved fairly quickly, it’s cleverly done and has repercussions throughout the rest of the volume. 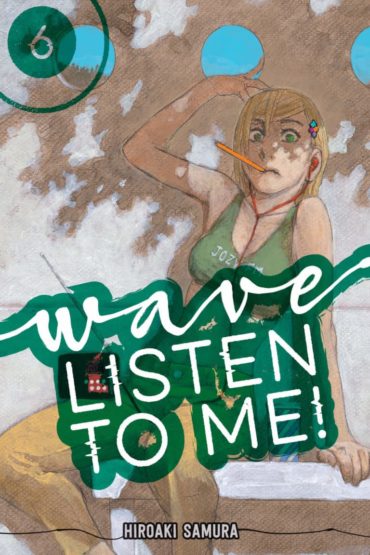 Title
Wave, Listen to Me! Volume 6

Wave, Listen to Me! Volume 7 Review

Volume 7 starts with Minare and Mizuho attempting to resolve a family’s personal struggles but it’s the inclusion of an unexpected story turn which makes for a more engaging read.