Please note that this review contains spoilers for Volume 7 of Wave, Listen to Me!

Volume 6 dealt with the aftermath of getting involved with a bizarre cult and Mizuho being given the opportunity to work on the upcoming weeks’ programming, making use of Minare’s unorthodox interviewing and radio hosting methods.

Their hunt for a story brings the duo to the household of a family whose son Junichi is a shut-in and won’t come out of his room. His mother seems to hold a laissez-faire opinion on the matter but it is revealed that  his sister Eriko was actually the one to reach out under the guise of her mother as a cry for help.

Naturally, Minare takes the direct approach and just kicks his bedroom door down as they attempt to confront the reclusive sibling who immediately mouths off but the scenario soon unfolds through an uncanny doll in the room. It seems that Junichi had a close bond with his adoptive younger sister before an unfortunate accident which has left the family fractured: he a shut-in, and his adoptive mother overly cheerful and oblivious to the world around her, this behaviour being implicated as a coping mechanism of sorts.

In what is perhaps a knowing wink to the reader, Minare declares in the aftermath of their first visit that “this is shaping up to be a looong arc”, musing on how the two have essentially been tasked with fixing this family’s problems. Mizuho also feels the strain, confiding in her mentor Kureko (with some prompting from Chishiro) about her “Shut-in Rehab” segments and the struggles they’re facing.

Another storyline that pops up in this volume is the return of Hiromi Saiki and his mom, who were part of the cult seen in the previous volume. The two are essentially squatting in Minare’s unused apartment and the mother uses the illicit photos taken of her and Hiromi to blackmail her into letting them stay (Hiromi is only 16 and remembers nothing of the truth, making the situation more difficult).

With Junichi refusing to co-operate, Minare and Mizuho decide to take unorthodox measures to get him to open up, determined to get a good story, thanks to Kureko’s encouragement and recruiting Hiromi to pose as the younger sister he misses and haunt him from outside the apartment complex at night.

We eventually get a better insight into their familial situation. Junichi has been worrying that, due to his sole  connection to the family being through his late father, they would cast him out if the mother remarried, prompting a rebellion of sorts to deter this from happening. Before this can be explored further though, the story takes a very unexpected turn when an earthquake occurs, throwing everyone out of balance at the radio station and also our leads on the scene near the apartments.

Author Hiroaki Samura mentions in his afterword that the inclusion was based on the then-recent Hokkaido Eastern Iburi earthquake, and that he added the story detail after being assured by his editor that they could make it work from a narrative perspective. His depiction of the event is quite eerie, especially in showcasing how a natural disaster can cause devastation so quickly.

We’re shown how the team at Moiwayama Radio Station react to the situation as there are major power outages, and we get introduced to a new character, Kayano Hirose, who works as a broadcaster giving the important updates of the earthquake and passing on the grave news of the aftermath to listeners.

This is where Volume 7 ends with the aftermath in full effect, and was certainly not a story direction I was expecting to see. The set up for Volume 8 also sees Mizuho fetching help for a concussed Hiromi, who ended up at Junichi’s apartment in a last-ditch effort to get him out of the house, only to be injured when the earthquake hit. We also have Makie potentially turning away from Voyager to pursue a writing career in TV, which was being discussed when the earthquake hit.

Overall, Volume 7 engages thanks to its story of a family’s personal struggles attempting to be resolved by Minare and Mizuho but it’s the inclusion of the earthquake story near the conclusion which made for a more engaging read, leaving me eager to see how the characters will cope and deal with the situation. 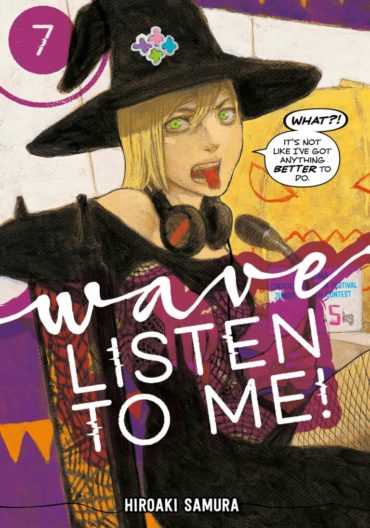 Title
Wave, Listen to Me! Volume 7