Zero to hero stories are ten a penny in the world of light novels. Be it isekai or straight fantasy, it’s not hard to come across these stories in the Western market. Today I’m here to look at I Kept Pressing the 100-Million-Year Button and Came Out on Top Volume 1 to see if it offers anything unique in the space.

Our story follows Allen Rodol, who is a student at Grand Swordcraft Academy. Allen has always dreamed of being a master swordsman but he has no inherent talent for it and is on the verge of being expelled for his low grades. To make matters worse, Allen gets into a quarrel with a class prodigy who challenges him to a duel; if our protagonist loses, he must leave the school. Allen has one day to prepare for the fight and although he knows he’ll likely lose, he still dedicates himself to swinging his sword.

Luckily for Allen, his fate is about to change. During his practice, he meets a mysterious hermit who asks him about his troubles. After Allen explains about the duel, the hermit offers him the use of a magical item called the 100-Million-Year Button which grants whoever pushes it 100 million years in a closed-off space, allowing them to use the time however they wish, while no time passes in the real world.

With nothing to lose, Allen decides to use the item and dedicates himself to training for 100 million years. Once he returns, he feels stronger, but not strong enough to beat the prodigy, so he chooses to push the button again and again until he has spent a billion years training! Having spent that much time swinging his sword and coming up with special moves, surely now Allen can overcome the battle ahead of him?

The short answer is yes, that was more than enough time for him to beat the prodigy (and in fact, he probably could have accomplished that after the first million years). Practically overnight, Allen becomes one of the strongest at Grand Swordcraft Academy and after joining and winning a local tournament, he’s soon given a scholarship offer for Thousand Blade Academy – one of the best in the world. Changing schools could give him the chance to start over and live a life where he’s not labelled the reject swordsman.

While I started by saying this is a zero to hero story I do appreciate that author Syuichi Tsukishima (who has a few other novels to their name but nothing in English) manages to avoid Allen becoming unbeatable after all his training. The average swordsmen indeed have no chance of beating Allen, but those with exceptional talent still give him a run for his money and that’s important since Allen still has no talent for the blade. Anyone could become strong with a billion years to practise it the way he did. So he is now a hero but with more limitations than other series like this would place on this protagonist, which is certainly a plus.

However, I do have issues with this book and they’re with how the plot progresses. It takes over half the book to get Allen to Thousand Blade Academy and afterwards he spends his days with his new classmates relatively peacefully. There’s no real structure to the narrative in terms of advancing the storyline until the last 30~ pages, where something does happen to change Allen’s path. Maybe it simply spent too long on the set-up or maybe the lack of a demon lord to slay or other challenges to overcome leaves it feeling empty, but I admit I struggled to figure out why we should care about Allen’s life after he defeats  the prodigy early on.

Admittedly this isn’t helped by the fact that Allen’s personality is quite stereotypical. He’s a gentle and friendly boy, but very ignorant about how powerful he is. He thinks he’s still weak and likely to be defeated by anyone and that’s an okay trait to begin with, but quickly grows frustrating as the book goes on. It’d be one thing if it was played for laughs like in Suppose a Kid from the Last Dungeon Boonies Moved to a Starter Town, but it isn’t and there is more than enough proof for Allen to realise the truth about his skills. Especially once he joins Thousand Blade Academy and becomes friends with Rose Valencia and Lia Vesteria, both of whom are top of the class and whom Allen defeats in duels.

It has to be said it doesn’t help that the extended cast members amount to little more than being defeated by Allen and then becoming friends and falling in love with him. I don’t particularly mind this trope when it’s well written, but with Rose and Lia it feels like it just happened without much justification. It certainly isn’t consistently developed throughout the book either, since it all occurs toward the very end.

I’d be more willing to put up with this lacklustre first volume if there had been a hook somewhere. I suppose what happens at the very end of the book is supposed to fill that role, but it comes too late for me and I imagine other readers as well. None of this is helped by the fact that there are similar and more interesting books on the market that fill the same niche, so with nothing to set it apart, it’s difficult to recommend or want to keep reading I Kept Pressing the 100-Million-Year Button.

I Kept Pressing the 100-Million-Year Button and Came Out on Top Volume 1 comes to the West thanks to Yen Press and has been translated by Luke Hutton. The translation reads well with no issues to note. Illustrations for the series have been handled by Mokyu (again nothing to their name available in English), and they largely focus on the battles which I appreciate. They’re not particularly memorable illustrations but they do the job, while the character designs are suitably attractive. The series is ongoing in Japan at seven volumes, while Yen Press have Volume 2 due for release in March.

Overall, I Kept Pressing the 100-Million-Year Button and Came Out on Top Volume 1 is an okay but underwhelming read in the fantasy genre. With no compelling hook to keep you reading, it’s difficult to recommend since there are other series like it with better characters and storylines on the market. 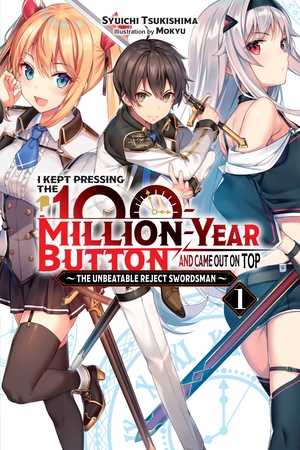 Title
I Kept Pressing the 100-Million-Year Button and Came Out on Top Volume 1: The Unbeatable Reject Swordsman