For a series with over 20 volumes and 8 million copies in circulation, perhaps it’s no surprise that Rent-A-Girlfriend has a spin-off series already. Today I’m here to take a look at Volume 1 of Rent-A-(Really Shy!)-Girlfriend, which promises to bring something a bit different to the franchise.

As readers may have guessed from the name, this series follows 19-year-old Sumi who was introduced in Volume 5 of Rent-A-Girlfriend. To say Sumi is simply shy is an understatement; the poor girl suffers from a communication disorder which means she finds it difficult to talk to or even briefly interact with strangers.

To help her overcome or better manage her condition, Sumi has decided to work as a Rental Girlfriend which gives her the ability to meet new people and earn some money at the same time. However, this job is far from easy and if Sumi doesn’t satisfy her customer and keep a five-star rating, she’ll soon find herself out of work!

Of course, Sumi isn’t alone; her boss is understanding of her condition and as of Chapter 3 of this book, she’s met Mizuhara, who works for the same company. With a capable senior whom she can turn to for help and advice, maybe Sumi will be able to become the confident person she dreams of.

It’s not just Mizuhara we get to see in this book though, as Ruka and Mami also have chapters of their own where Sumi interacts with them. This is sure to please fans of the main series, especially given these chapters are canon and take place alongside it. That said, Volume 1 takes place before Sumi’s introduction into the main series so she’s yet to meet Kazuya (although he is namedropped by Ruka).

The fact that Kazuya isn’t here works out for the best since we get a chance to observe how Sumi is when she’s by herself. Some chapters see her going on outings, while others show her on a date with a client. The divide helps illustrate that Sumi’s condition affects all of her life and not just her work, which is important since in the main series we haven’t had the opportunity to see Sumi outside of her dates with Kazuya.

As far as spin-off series go, this one is a great addition if you’ve found yourself a fan of Sumi. Of course, it’s nice to have more of the other girls too, but fear not – Sumi is always front and centre of the storylines. Although this also means that if you aren’t a fan of Sumi, then this release is completely skippable since it’s unlikely to change your mind about her.

Artwork for this series has been handled by original mangaka Reiji Miyajima with “additional art” by Yuka Kinami. Judging by the afterword, Kinami was largely on assistant duties, but it’s still nice to see her name on the front cover along with Miyajima’s.

As far as the artwork goes, it’s easily on par with Rent-A-Girlfriend itself, with plenty of focus on Sumi and the various expressions she makes. Her non-verbal communication is a big part of the series, so it’s nice to see the focus on that and for it to be conveyed so well. As with the main series, there are also quite a few two-page spreads that look terrific!

Rent-A-(Really Shy!)-Girlfriend Volume 1 comes to the West thanks to Kodansha and, like the main series, is translated by Kevin Gifford and lettered by Paige Pumphrey. We’re not always blessed to have the same team working on both spin-off and main series here in the English market, so I’m pleased to see both return here and keep everything consistent with Rent-A-Girlfriend.

The series is ongoing in Japan at two volumes, although it has been on hiatus since early 2021, so the next volume may be the last. Volume 2 is currently scheduled for an English release in January, although since it doesn’t even have an English cover yet, I suspect this will change.

Overall, Rent-A-(Really Shy!)-Girlfriend Volume 1 proves an entertaining read for fans of Rent-A-Girlfriend. Of course, your mileage will vary based on how much you like Sumi as a character, but provided you don’t dislike her, this one is sure to steal your heart. 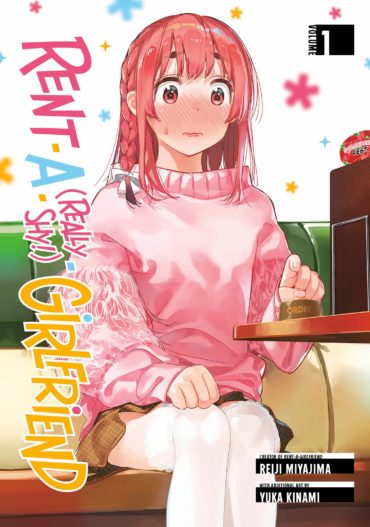