In Volume 1 of Rent-A-(Really Shy!)-Girlfriend we saw Sumi take her first steps into the world of being a Rental Girlfriend in a bid to overcome her communication disorder and anxieties. Sumi struggles to talk to her dates and now in Volume 2 her rating is steadily falling, and she finds herself in danger of losing her job. Luckily for her, Mizuhara might have found her the perfect practice partner…

Mizuhara’s solution to Sumi’s problem is to introduce her to Kazuya, one of her clients that she can trust not to do anything to hurt Sumi. If you’ve kept up to date with the main series of Rent-A-Girlfriend then you’ll recognise this story development from Volume 6, where Sumi was first introduced.

This storyline takes up the first 3 chapters of the 7 on offer here and they’re largely the same as what we saw in Volume 6, just told from Sumi’s perspective instead of Kazuya’s. This is more interesting than it initially sounds since we get to see all of Sumi’s inner thoughts and struggles on their practice date.

We also get to see her first impressions of Mami when she comes over to grill Kazuya about why he’s going around with a new girl on his arm, which I found quite funny compared to when we saw these scenes in the main series. Most importantly we see that this date with Kazuya gave Sumi the confidence to continue trying her hardest as a Rental Girlfriend. She might be shy, but with enough experience, she feels optimistic about becoming the person she wants to be.

From here the book returns to the more episodic structure we saw in Volume 1, with Sumi struggling with her disorder in everyday life. For example, there’s a chapter about Sumi walking her dog in the park and struggling to interact with the other dog walkers who are interested in getting to know them both. Another chapter shows Sumi going on a photoshoot to update the picture for her profile on the rental girlfriend website, but she is so stressed about the whole thing that she keeps freezing up and looking like a robot!

In the end, the photoshoot chapter ended up being my favourite of the lot since whenever Sumi is about to have her picture taken, the artwork depicts her as a Minecraft-style character complete with an oversized head and stumpy arms. It’s a nice spin to put on the subject of someone looking ‘robotic’ and as the day goes on it’s not just Sumi drawn in this style but also the people and objects around her, which I thought was amusing.

How much you enjoy this volume will depend on how much you care about Sumi as a character, given that unlike in Volume 1 we don’t see a lot of the extended cast. This time we only see Kazuya, Mami and very briefly Mizuhara at the end. I prefer this approach since it gives us more time to spend with Sumi, but some readers might be disappointed given Volume 1 had other characters appear more often.

Rent-A-(Really Shy!)-Girlfriend Volume 2 comes to the West thanks to Kodansha and continues to be translated by Kevin Gifford. The translation reads well with no problems to note. Since the series began being released in English, it has come off hiatus in Japan long enough to produce enough chapters for a third volume which is scheduled for a Japanese release in May and then an English release in November.

Overall, this second instalment of the Sumi focused spin-off proves an entertaining read. While we see less of the extended cast this time around, the trade-off is that we get to spend more time in Sumi’s daily life as she endeavours to overcome the challenges she faces both at home and work. 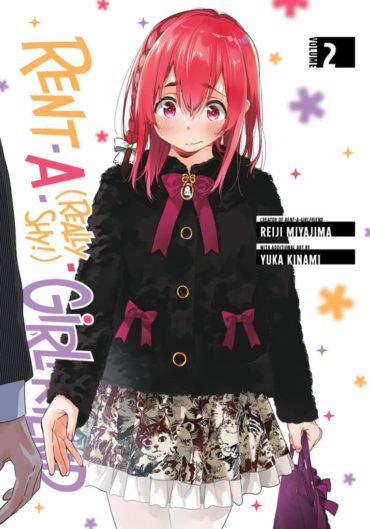