Towards the end of last year, I reviewed the first volume of the original light novel of this series, which despite its flaws was a fun read. Now it’s time to check out the manga adaptation, which I’m pleased to say holds up very well and even fixes some of the light novel’s more glaring issues.

The story revolves around Aileen Lauren d’Autriche, a young noblewoman and daughter of the Ellmeyer Empire’s prime minister, who has her engagement to the Empire’s crown prince, Cedric Jean Ellmeyer, publicly annulled. Humiliated in front of a crowd of Cedric’s followers and his new lover, Lilia Reinoise, the shock of the situation brings Aileen memories of her past life as a sickly girl in modern Japan, who can do nothing but play video games from her hospital bed. It turns out that the world Aileen is in is the setting of her past life’s favourite otome game, “Regalia of Saints, Demons, and Maidens”, and she’s the villain that stands in Lilia’s way. Of course, being the villain means that she doesn’t get a happy ending, dying in every route of the game, and that’s something that she is desperate to avoid. Aileen quickly hatches a plan to get hitched to the cause of those deaths: the Demon King and Cedric’s half-brother, Claude; aiming to steal his heart before Lilia can turn him into the game’s final boss.

This first volume of the manga covers the first three chapters of the light novel and adapts them pretty much exactly, point for point. However, while the light novel rather clumsily repeated itself a lot in trying to explain the plot, the manga cuts this out, trims down the fat and focuses just on the scenes that matter. As a result, the narrative flows a lot better, and it significantly tightens up the pacing. You do lose some of the extra details from the light novel, particularly in Aileen’s narration of the current events, but it’s not necessarily a bad thing as a lot of it was superfluous anyway, and the extra visual detail from the manga and being able to see the characters’ emotions rather than having them described to you does make up for it. The dialogue is a lot punchier too and it gets across the light novel’s sense of humour rather well, as I still found myself giggling at the sillier character moments even though it wasn’t my first time seeing them.

With all that in mind, I’d say that so far, the manga is the better way to experience the story, as it has these fixes and keeps the light novel’s greatest strengths in its characters and the want to do something different with the villainess trope and its more political plotline. Admittedly we haven’t quite got to that more political part yet, but it still does justice to the light novel’s world building, spelling things out a bit more clearly – we get a map of the city here for example, which makes it easier to see how the class system works.

I quite like the art too, as Anko Yuzu takes the character designs from Mai Murasaki’s original illustrations and makes them softer and cuter, which makes the more comedic parts of the story hit a lot better. This is particularly noticeable for the side characters, as although some are a little different from what I imagined, their designs are pretty much on point with the personalities, particularly with Aileen’s father, as his glasses, smart handlebar moustache and dastardly smirk certainly give him that aristocratic air. However, I did find that with characters that were meant to have a meaner edge, the artwork lessens their impact a little, like with Beelzebuth (who also never consistently has his wings out in the manga unlike in the novel illustrations) and Prince Cedric.

I’m the Villainess, So I’m Taming the Final Boss is being published by Yen Press and is available both digitally and physically. Due to the ongoing industry-wide stock issues, I ended up purchasing this digitally and I was pleased with the overall presentation, with the colour pages and two-page spreads looking very nice on my device of choice. The translation is by Taylor Engel, who also translated the first volume of the light novel and has no issues to note and is consistent across both works. It is worth noting however that the manga adaptation is only listed as three volumes, which is a bit of a shame considering the improvements over its source material.

Overall, this first volume of I’m the Villainess, So I’m Taming the Final Boss offers a great read, adapting the opening chapters of the light novel well, fixing some of its more clunky aspects and tightening up the pacing to produce what is arguably the best way of experiencing the story. For those wanting a more politically focused take on the villainess trope this is therefore a great place to start; just be aware you will have to cross over to the light novel after Volume 3. 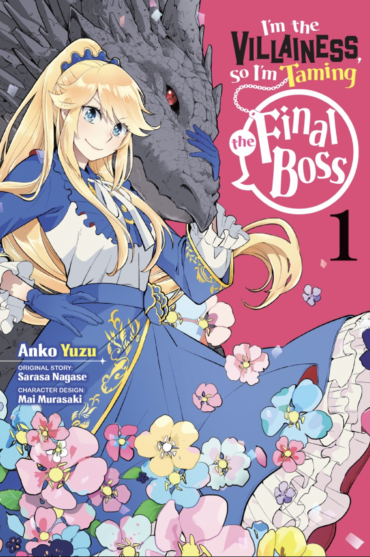 The final volume of this manga adaptation reaches its climax as Aileen tries to save Keith’s bacon and free him from the demon trafficking plot he’s been caught up in for so long. However, not everything goes according to plan, as Lilia and Prince Cedric are determined to get in the way!