This final volume of the manga adaptation of I’m the Villainess, So I’m Taming the Final Boss jumps straight into the action covering the final couple of chapters of the first light novel, as Aileen tries to save Keith’s bacon and free him from the demon trafficking plot he’s been caught up in for so long. However, not everything goes according to plan, as Lilia and Prince Cedric are determined to get in the way and finish both Aileen and the Demon King off once and for all.

While it helps that the original story was so strong, this is a great finish for this 3-volume adaptation of the original light novel. While there’s some initial scene setting as we finish up the confrontation between Cedric and Lilia’s faction and our protagonists, it doesn’t really waste any time in getting to the climactic scenes as things properly go down at the illegal demon sale. While events play out exactly as in the light novel, you do lose some of the detail as we no longer have Aileen’s internal monologue, but overall, it creates a snappier and more action-packed script which is more suited for a visual medium.

Having a visual aid makes certain scenes feel more impactful, particularly during Cedric and Lilia’s attack, where the art really brings out the actions and emotions of the characters better than the book reads, leaving out the novel’s more detailed and calculated descriptions for something more natural and faster paced. You can see a lot more through the characters’ eyes and faces, while there’s a lot of finer details that artist Anko Yuzu has interpreted, such as the design of the Sacred Sword and even the type of dragon Claude becomes (switching from the Asian style of the original novel illustrations to a Western style), that just put forward this part of the story as a proper spectacle.

And while the action here is the focus point, it never strays or forgets about its core goal of ensuring that the humans and demons don’t come to blows, with a consistent narrative and some good character development. Keith gets to show he’s not just got a crafty mind but is also wily in a fight, while Beelzebuth must learn why lashing out in revenge is a bad idea. I was a little conflicted over the variations in Aileen’s character though, as one particular moment of weakness threatens a damsel in distress tone in the way it is worded. Given the seriousness of the situation she finds herself in, which warrants a content warning for attempted rape, you can probably give it a free pass as a natural reaction. That said, it’s just a blip, as otherwise she comes out kicking and screaming and beats Cedric up enough in the struggle that he’s probably not going to try those types of tactics again, before an utterly satisfying showdown with Lilia that has been coming since the very beginning.

It’s overall a great ending which closes things off well, much like the light novel, which works perfectly for a 3-volume manga. It does however end on a message of it not being the actual end of the story, which is interesting, considering the volume clearly has the word “final” plastered on the cover. I think it is a bit of a shame the manga isn’t continuing as it does show the story in its best light, trimming the fat from the light novel that made it a bit awkward to read early on, and using its visuals well to build in a lot of the finer details that were previously left up to your imagination. It does however make for a fantastic blueprint for the anime adaptation, which I expect to end on the same note if it paces itself correctly.

I’m the Villainess, So I’m Taming the Final Boss is being published by Yen Press and is available in both physical and digital editions. Opting for the physical version for this review, I can say that the book is well presented with no issues to note, while Taylor Engel continues to provide the translation which reads well.

One final thing to note is that this volume fills the final third of its page count with bonus side story chapters which are great little asides that paint our main cast in different lights, whether that be showing Claude as a cheeky young child, revealing Aileen’s passion for fashion, or offering them a cute romantic moment. All three gave me some good laughs and felt like an ideal way to end the book.

Overall, this volume closes out the manga adaptation of I’m the Villainess, So I’m Taming the Final Boss on a high. While the original story was already a great concept, this polishes it off as it focuses in on the best bits and trims the fat from the light novel, all while giving it a great visual makeover that both highlights the action scenes and better puts across the thoughts and feelings of the characters. For fans of villainess stories, I’d honestly say this is a must-read, but is also worth a look for anyone wanting a more fantastical and shrewder take on a court romance. 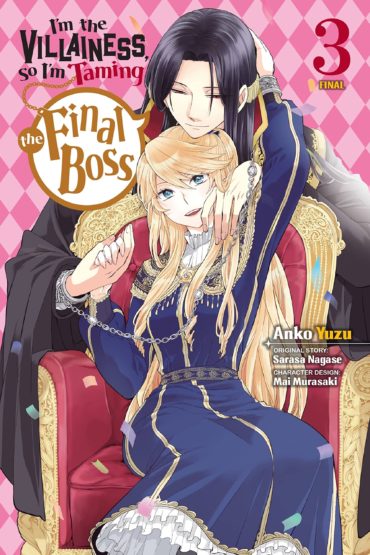