It’s a new year and despite there being no sign of more Pretty Boy Detective Club light novels making it to the West, Vertical has just released Volume 2 of the manga adaptation. Does it continue to delight? Let’s find out!

As we reunite with our cast, we find protagonist Mayumi Doujima has formally joined the Pretty Boy Detective Club and it’s not long before the group find themselves embroiled in a new mystery. On her way to school, Mayumi runs into a businessman who drops a large bundle of ten ¥1,000 notes which of course she swiftly returns to him. In exchange for not just pocketing the money, the businessman lets Mayumi keep some of it as a reward… but not everything is quite as it seems…

Back at the clubroom, Mayumi informs the others about her mysterious encounter and before long, they realise the money Mayumi was gifted is both fake and has a hidden invitation inside. This invitation is for the Reasonable Doubt Casino, which is being held at rival school Kamikazari Middle School. Of course, Mayumi and the others are eager to get to the bottom of both the counterfeit money as well as the businessman who was carrying it around in the first place, so together they set out for a night of gambling and mischief at Kamikazari.

However, that’s not the only storyline in this manga collection as it also adapts Volume 3 of the light novels. The second storyline sees the club redesigning their club room, which leads to them discovering a secret passage in the ceiling. Hidden within are replica paintings of many famous works, but they all have one thing in common: all the people who should be depicted in the pictures are missing.

The paintings have been stashed in the secret passage for at least three years, which means trying to figure out their origins is going to become tricky for the club. In fact, Mayumi might even have to turn to a new friend she made in the Reasonable Doubt Casino case, which the rest of the group are certainly not going to be happy about, since they’re rivals with the school. But Mayumi will do anything it takes to solve this case since solving it may lead to her working through the feelings of belonging she’s been struggling with.

Considering the next volume of this manga adaptation is the final one, I’m somewhat surprised the series didn’t wrap up with the replica paintings case. From what I’ve seen and read of the series so far, I think it would have been a satisfying endpoint since it’s here that Mayumi finally comes to realise she belongs in the Pretty Boy Detective Club with the stylish boys.

Ever since her dream of becoming an astronaut was put to bed in Volume 1, our heroine has been struggling with figuring out who she is and where she fits in the world. This has been especially difficult while she’s been in the club since she’s neither a genius, boy nor a detective like the others. So she wonders if she has a place here. The two stories included in this omnibus collection thoroughly explore her feelings while taking us through these interesting mysteries, before finally having Mayumi come to an answer to her fears and questions.

I also appreciate artist Suzuka Oda’s decision to age up the character designs for the manga since seeing them attend a casino makes a lot more sense when they look like high school kids compared to the realities of them being in middle school. The designs have certainly grown on me as time goes on since they’ve proven they suit the personalities of the cast throughout these three arcs.

As previously mentioned, Pretty Boy Detective Club Volume 2 comes to the West thanks to Kodansha via their Vertical imprint and continues to be translated by Winifred Bird. The translation reads well with no issues to note. The copyright for this volume references it containing Volumes 2, 3 and 4 of the Japanese releases but I think as opposed to whole volumes, it’s just parts of Volume 2, all of #3 and some of #4 since Vertical’s initial release stated it was Volumes 1-2. Either way, the English releases will be finished when the third collection is released in November 2022.

Overall, Pretty Boy Detective Club Volume 2 collects two of the best stories in the series and offers an entertaining and emotional read as Mayumi solves mysteries while figuring out her place in the world. If you enjoyed the first book then there is no reason not to continue with this one. 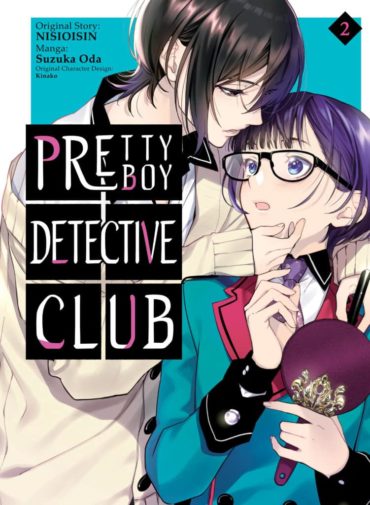 Pretty Boy Detective Club makes its manga debut with a slightly different look for our main cast but with a story that is nevertheless worth checking out.