Back in April Vertical started releasing A School Frozen in Time, a manga series by Naoshi Arakawa. While I had somewhat mixed feelings on the first instalment, I was still eager to see where the story was heading. So, today I’m here to take a look at Volume 2 and find out if anything has changed!

When we last saw our cast, the group of eight had become seven after the mysterious disappearance of Mitsuru, leaving nothing but a trail of blood behind. The group now fear for their safety and become desperate to find a way out of the school they find themselves trapped in.

Previously, the group wondered if they were trapped in order to remember who died on the day of the school festival, and floated the idea that it could even be one of the eight there. However, in Volume 2 this idea is turned on its head as Shimizu suggests that they could be trapped within the consciousness of the student who died.

The concept Shimizu has come up with is that it’s not that everyone else around them disappeared when they got to school, but simply that those eight were made to disappear instead. Shimizu explains that her theory is based around the idea of The Langoliers, a story written by Stephen King in his Four Past Midnight anthology. But even knowing why the situation is occurring doesn’t tell them how to escape it…

While trying to figure out the mystery, Shimizu gets split off from the rest of the group and soon starts reminiscing about her friendship with the protagonist Takano. Takano is someone that Shimizu respects, but she also has a crush on him. Despite her efforts to get close to him, Takano always seems to keep her at a distance and calls her ‘Mizz Shimizu’, while acting more familiar with the rest of their friend group. Perhaps even more importantly, Shimizu doesn’t just love Takano but she also wants to become someone like him. Someone respected and beloved by others.

It has to be said that a large chunk of this volume is focused on Shimizu and her relationship with Takano. While it does feed back into the plot, it feels like it somewhat muddles the bigger picture. Again I wonder if some of this comes from originally being a novel with a more natural flow for exploring each member of the cast, compared to the manga which is more restrained.

Being only a four-volume series we’re now halfway through the story and in terms of where the story is by the end of this instalment, I find it concerning. The trouble is that so much time is spent on Shimizu’s tale that it’s only really the first and last chapter that moves along the overarching story. Even once we get to Volume 4, I worry that we won’t be that familiar with every member of the group in a satisfactory way, since there just isn’t enough time to explore each of their backstories.

If you enjoyed Volume 1, then I think you will still enjoy what this second book offers, but I will say it hasn’t done anything to address any of the concerns I held initially. I’m still keen to see where the story is going, but I’ve certainly lowered my expectations accordingly.

As previously mentioned, A School Frozen in Time Volume 2 comes to the West thanks to Vertical and has been translated by Michelle Lin. The translation reads well with no problems and like the first volume, there are translation notes at the back. Volume 3 of the series is scheduled for release in August.

Overall, A School Frozen in Time continues to be an awkward and often frustrating mystery series. With not enough time to fully flesh out the cast or the plot, it continues to offer a mishmash in the hopes of achieving something in the little time it has. That said, I’m still optimistic that the conclusion will be worth waiting for. 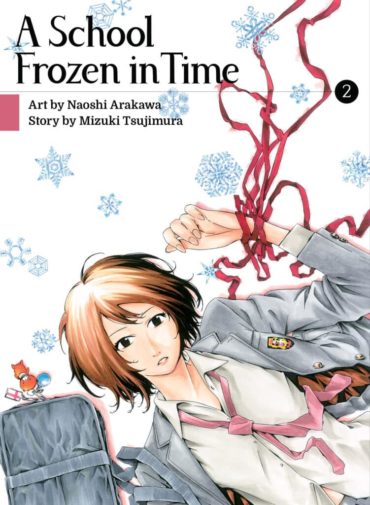