The previous book may have been largely focused on exploring Kaede’s story, but readers may recall that Shouko (Sakuta’s first love) was also a part of the plot. The ending of that book left us with Shouko in Sakuta’s house and Mai coming home to find them together. This instalment picks up right where that one ended, with Mai understandably very mad with Sakuta for not telling her that Shouko had been staying with him.

If trying to salvage his relationship wasn’t enough, Sakuta also needs to work out what’s going on with Shouko. He’s met her both as a young girl in junior high and her present situation as a college student. In fact, the junior high version of her was coming over to visit his house in the last few weeks, so it’s not possible for her to also be in college! At least, not without some sort of Adolescence Syndrome going on and if that’s the case, what’s causing it?

While struggling to explain himself to Mai, Sakuta turns to his best friend Rio Futaba to mediate for him. While she has no interest in getting involved in his relationship problems, Rio is intrigued by Shouko’s situation especially having gone through something similar herself in Volume 3 of the series. Rio’s theory is that both versions of Shouko exist at the same time, which is something Sakuta goes on to confirm when he learns little Shouko has been checked into the hospital for an extended period due to her health condition.

As it turns out, Shouko’s health is so poor that the doctors have estimated she will only live until she is in junior high, unless they find a heart donor. Because of this, Shouko has never dreamed about her future, yet the older version of her who has returned to Sakuta’s life is healthy, free-spirited and optimistic about life. Rio and Sakuta wonder if this version of Shouko has been born from the little one’s fear of dying without reaching adulthood and accomplishing anything – but could it be that the truth is far stranger?

Like Rascal Does Not Dream of a Sister Home Alone, this entry in the series is highly emotional. Not just because of Shouko’s storyline, but also what it means for the relationship between Sakuta and Mai, who have been together since the end of the first book. Mai feels guilty for not being there to support Sakuta during Kaede’s struggles and knows that Sakuta was saved by Shouko in the past when Kaede’s Adolescence Syndrome first started. She worries it won’t take much for Sakuta’s love to be rekindled with the older Shouko and then where does that leave her relationship with him, especially when he hasn’t been truthful about Shouko staying with him to start with?

Of course, Shouko’s story on its own is sure to grip readers by the heart and refuse to let go until the end. Although I’ve complained previously about her story being sidelined and sandwiched into arcs that are focused on something else, this has still worked out surprisingly well since readers are both attached to the character and intrigued by the storyline. It also helps that author Hajime Kamoshida is spending plenty of time on this arc, even going so far as to split it across two separate books – which I warn you, dear readers, has left us with one of the most painful cliffhangers in the series so far! Honestly, Kamoshida’s writing just keeps getting better and better. I thought the last book was going to be as emotional as this series could get, but this one almost tops it. I’m not sure how many more tears I can shed over this series without turning into an emotional wreck, so I hope there is a happy ending on the horizon to make up for all the pain so far!

Overall, Rascal Does Not Dream of a Dreaming Girl proves another powerful entry in the series. Fans will be pleased that we’re finally getting to the bottom of Shouko’s story after all this time, but you might want to read this one back-to-back with the next book to avoid the cliffhanger ending. Whatever the case, make sure you have tissues at the ready! 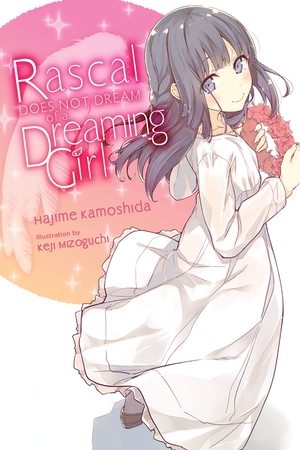 Title
Rascal Does Not Dream of a Dreaming Girl