Volume 4 of the Rascal Does Not Dream of series saw protagonist Sakuta caught up in a body-swapping case, with his girlfriend and her half-sister trading places. Now we’ve reached Volume 5, which not only covers the end of the TV anime content but also shines the spotlight on Kaede!

Throughout Volume 4, we saw hints of Sakuta’s sister Kaede getting ready to return to a normal life. During the series so far she’s remained at home, afraid of the world after being bullied at school and suffering from Adolescence Syndrome, which resulted in her sprouting bruises or cuts whenever she grew anxious or afraid. This eventually landed her in the hospital and tore their family apart as they struggled to deal with what was happening, which is what led to Sakuta and Kaede living on their own as we’ve found them since the start of the series.

Having spent time around Sakuta’s girlfriend Mai and his other friends, Kaede has begun to open up and see the good in the world once more. Now she’s determined to leave the house and eventually return to school. no matter what it takes, but Sakuta is afraid of what will come of Kaede moving on too fast.

To start with, Kaede makes a list of goals, starting with small things like putting her shoes on or leaving the apartment. These gradually grow into bigger tasks like taking a walk, going to Mai’s place and visiting the zoo to see the pandas. Slowly Kaede accomplishes these tasks, but on a trip to the beach, she runs into an old friend from her middle school which causes a significant emotional setback…

Kaede isn’t the only thing Sakuta has to worry about in this volume, as he also receives a letter from his first love, Shouko. She asks him to meet at Shichirigahama Beach, where they first met, but the day Sakuta waits for her, she never shows and our protagonist is left wondering if there isn’t something paranormal about her.

Readers may remember Shouko from Volume 3, Rascal Does Not Dream of Logical Witch. There she appeared as a young girl in junior high, which confused Sakuta no end since when they first met she was a high schooler. In this book our protagonist assumes the letter he receives is from the older Shouko, but because of everything that’s happening with Kaede, we never quite get to the bottom of her story (although Shouko does appear for a significant portion of the book toward the end).

While I’m not particularly fond of the fact we still haven’t finished Shouko’s story, I will praise author Hajime Kamoshida for everything else in this book. His depiction of Kaede’s anxiety is very true to life, which will make her story relatable for many, while also providing a significant emotional hook to keep you turning the page. Kamoshida is a talented author who writes just enough detail for you to imagine the scene but never feels like it’s dumping too much information on you at once. I’ve always thought he had a knack for depicting emotionally-charged scenes and that certainly comes through in this story.

If you’ve watched the anime adaptation of the series then you may remember this arc feeling a little rushed at the end and I’m pleased to say that the book flows better in that regard and sets up for the continuation better, so there is a lot to gain from this one even if you have previously seen the anime. Volumes 6 and 7 got adapted into the Rascal Does Not Dream of a Dreaming Girl movie so, depending on if you’ve watched that, what comes next may not be new content to you, but here in the UK the film has gone unreleased, so it will at least be brand new to me!

Overall, Rascal Does Not Dream of a Sister Home Alone is the book Kaede fans have been waiting for! Author Hajime Kamoshida once again delivers an emotional read with a realistic look at what it means to live with such deeply rooted anxiety. 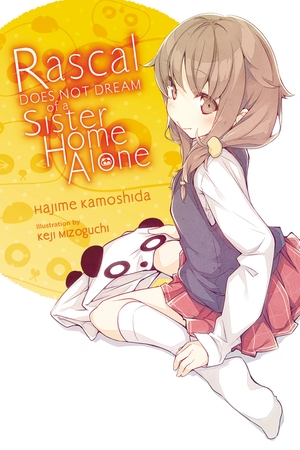 Title
Rascal Does Not Dream of a Sister Home Alone