Over the last couple of years there’s been a rise in the number of romance light novels being licensed for the English market, although they usually focus on high-school students. To offer something different, Yen Press has brought My Happy Marriage to the West, but does it prove an interesting read? Let’s find out!

The story is set in a fantasy take on Japan around the Meiji/Taisho era. In this Japan, nobles are known for having strong supernatural powers that allow them to fight against creatures called the Grotesqueries. Despite both her parents being Gifted, protagonist Miyo Saimori is born talentless and after the death of her mother and her father remarrying, she’s forced to work as a servant for her stepmother and half-sister.

Miyo is abused horribly by her family, both verbally and physically – often being left with no food to eat and rags to live in. For years she endures this, wishing for a better life as her body and mind become more fragile. Miyo’s chances at a happier life increase when her family sends her off as a marriage candidate for Kiyoka Kudou, a powerful Gifted who is a commander in the army. Unfortunately for Miyo, Kiyoka is also known for the fact that all his previous marriage candidates ran off after three days of living with him, so he may prove to be a difficult man to live with!

Miyo is taken to a quaint cottage in a wooded area where Kiyoka lives by himself. While it strikes her as a home unsuited to the head of a powerful family such as the Kudous, Miyo also finds it homely and easier to live in than a big mansion. Kiyoka’s only servant, Yurie, also proves a friendly face for the young girl. But when it comes to Kiyoka, he shows little interest in Miyo and if anything, her constant apologising quickly gets on his nerves.

Things only get worse on Miyo’s first morning there when she decides to cook breakfast for everyone, which Kiyoka then refuses to eat for fear of it being poisoned. Thinking about it after the fact, Miyo understands why Kiyoka wouldn’t want to eat something from someone he doesn’t yet trust, but she feels miserable about it all the same. Can she ever regain the trust of her husband-to-be or is she also destined to be cast aside after a mere few days?

Ultimately, Miyo isn’t cast out, thanks to some intervention from Yurie whose opinion Kiyoka respects considerably. Up until now all of Kiyoka’s potential brides have either been entitled rich kids who hated Kiyoka’s more humble way of living or mistreated his trusted servant, so with Miyo’s friendly and respectful personality, she proves a favourable match. As time goes on, Kiyoka continues to warm to his new companion, although he remains mystified as to why her self confidence is so low when she’s such a nice girl.

Miyo, on the other hand, spends her days waiting to be cast out. Because of being talentless, she can’t imagine Kiyoka wanting to marry her and she’s afraid to tell him the truth about not being Gifted. But having finally found a place where she won’t be hurt and she can spend her days peacefully, Miyo also doesn’t want to say goodbye to her new life, so she’s left in limbo and feeling guilty for her very existence.

One of the things I appreciate about Akumi Agitogi’s writing here is that they never make light of Miyo’s situation and they don’t make us readers believe that love can heal her scars. Of course, just by being out of that abusive situation, Miyo’s confidence begins to grow but to truly overcome it will take years. This is something Agitogi respects and is willing to play the long game with, which I’m happy for since too many series would have Kiyoka act as the sole reason for getting over the trauma. And in fact, as much as this is a romance novel, it’s very focused on Miyo’s growth as a character rather than the relationship (although that’s a big part of it too). I’m also glad that Miyo’s abuse wasn’t just a set piece and Agitogi spends a lot of time fleshing out Miyo’s feelings and the scars left behind. I think it’s important that such a difficult subject is treated with that level of respect and Agitogi certainly accomplishes that.

This is a short book at only 156 pages, but I found myself engrossed until the end as I hoped desperately for a happy ending for Miyo. The only criticism I was left with at the end is that the Gifted and the Grotesqueries are underutilised. The supernatural abilities of the Gifted fare somewhat better since we see them in action occasionally, but we never once see the Grotesqueries and only hear about them a handful of times. This isn’t a huge concern since the book is short and focused on Miyo who has no talent anyway, but I wouldn’t have minded seeing them play more of a role if they were going to be discussed more than once.

As previously mentioned, My Happy Marriage comes to the West thanks to Yen Press and has been translated by Kiki Piatkowska. The translation read well with problems. It’s worth noting that although this is a light novel, there are no illustrations beyond the cover illustration.

The series is ongoing in Japan at five volumes with Yen Press having Volume 2 scheduled for release in June. There is also a manga adaptation that is licensed by Square Enix and is due to begin releasing in English in September. On top of that, there have also been rumours of an anime adaptation, although this is yet to be confirmed at the time of writing. So there is a lot to look forward to, should you find yourself a fan of the series.

Overall, My Happy Marriage Volume 1 successfully offers an engrossing story unlike any other currently on the market. Author Akumi Agitogi has written a respectful tale about what it means to both be abused and find happiness on the other side, all the while mending the scars left behind. 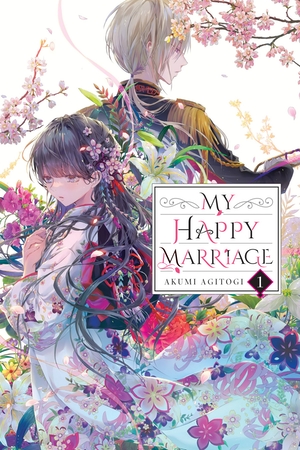