When we left the cast at the end of 86 Volume 8, Theo was badly injured and the Noctiluca Legion the group had been fighting escaped to freedom. Now Shin and the others must pick up the pieces after the loss of some comrades and an urgent need to chase after their enemy. Let’s find out what this book has in store for us!

The Noctiluca has made its escape to the Holy Theocracy of Noiryanaruse, a nation that both the United Kingdom and Federacy are wary of. All the same, they need to defeat the Noctiluca before it gets a chance to wipe out humanity, so the Eighty-Sixth Strike Package quickly sets out to defeat it with the help of this nation.

However, Shin’s group are now a man down since Theo was injured in the last fight. Unfortunately, Theo lost his left hand, effectively forcing him to retire from being a Processor since no prosthetic is good enough to give pilots the reaction times required to operate the Reginleif units. As an Eighty-Six who lived for nothing but protecting his comrades and surviving on the battlefield, this is understandably a difficult thing to come to terms with. Theo can continue in the military in another department, but he will never again stand alongside Shin and his unit on the battlefield.

Although Theo is given a fair bit of focus in this book, the spotlight is largely placed on Kurena who is sinking into a depression. In Volume 8 she froze up in battle, costing Shana (Shiden’s vice-captain on the team who often fight alongside Shin’s group) her life. Naturally, Kurena thinks it should have been her that died instead and it probably would have been, had she not frozen. But that’s not all Kurena is dealing with; now that Theo is no longer there and is starting to dream of what to do after the war, Kurena realises that everyone is leaving her behind.

Throughout the series so far we’ve seen many members of the cast struggle with transitioning from their time spent being used as weapons to realising there is more to life than the war. This has been a big theme for Shin, who felt like he had nothing to live for and now dreams of a future with Lena. Many of the other Eighty-Six have gone through a similar thing and found interests and paths forward to pursue. Now instead of fighting to survive, they fight to end the war and live on afterwards. But Kurena isn’t there yet, she’d rather the war continued so she could stay by Shin’s side – so that she’s needed somewhere. This book firmly poses the question of whether it’s okay to look to the future and what it means to be stuck on the battlefield as  Kurena is.

It probably goes without saying at this point that Volume 9 of 86 is a busy one with a lot of different plotlines happening simultaneously. For the most part, this works out fine since the themes are similar and I don’t think I’d have been satisfied if we hadn’t seen Kurena struggling and the aftermath of events with Theo. However, this does mean author Asato Asato jumps between characters a lot and the transitions between scenes aren’t handled very well, leading to a book that’s one of the weakest for me so far.

At times, scenes become jumbled as Asato jumps between past and present (especially early on with Theo’s segments), but even after that, busy sections of the book begin to get confusing. It often feels as if there must be a better way of transitioning between characters that Asato has missed and that’s a shame since 86 has never struggled in the writing department before. Admittedly, Volume 8 was confusing in places during the action but we’ve never had this problem in portions outside of battle. Hopefully, now Asato has brought some of the storylines to an end like the ‘will they, won’t they’ between Lena and Shin, the next instalment will have more breathing room.

86 Volume 9 comes to the West thanks to Yen Press and continues to be translated by Roman Lampert. The translation reads well with no problems to note. Volume 10 of the series is scheduled for a release in May and is a prequel story revolving around Shin as a child. That should offer something very different to the recent storylines!

Overall, 86 Volume 9 is another interesting entry in the series and gives Kurena some well-deserved character development. It’s certainly one of the weaker books, given the issues with the writing, but that’s unlikely to put readers off who have been invested in the series all this time. 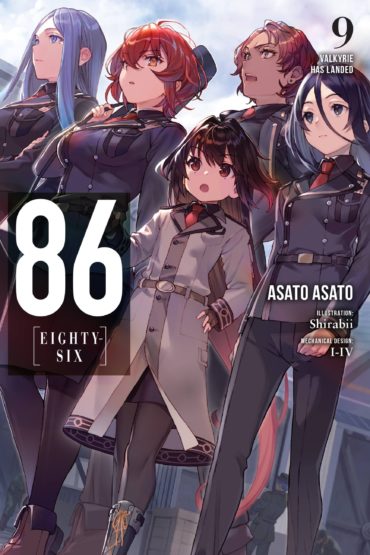