In Volume 5 of 86, the cast went to the United Kingdom of Roa Gracia and met the fifth prince Viktor Idinarohk and his army of Sirins, an anti-Legion force. After a stressful first mission in the country, our heroes managed to make it back alive, but the sights they saw on that battlefield will haunt them forever. Now away from that fight they must come to terms with what they saw in Volume 6 of the series.

In particular, the Eighty-Sixth Strike Package was left scarred after witnessing the Sirins willingly throwing their lives away to win the decisive battle. Having grown close to Lerche (Viktor’s Sirin attendant), Shin struggles with the truth of how disposable the Sirins are. Lerche tells him to value his life and not to throw it away, but having known nothing but fighting the Legion since he was a child, Shin doesn’t know how to find something to live for.

Even though Shin is beginning to see a path forward beside Lena as a friend, as a comrade and maybe even as something more, he can’t forgive himself for the deeds he’s done on the battlefield. Surely someone like him will only taint the pure girl he’s grown close to? Is it truly right for him to desire a future where they can be together?

While Shin is struggling with his feelings, it’s up to Lena to step in. Although the two have grown distant recently because of Lena being angry at Shin for taking so many unnecessary risks, she’s realised that her understanding of what the 86 have been through is lacking. Instead of butting heads with Shin, she needs to try harder to see his point of view and, with some help from Viktor, she begins to make headway in closing the distance between them.

Compared to other instalments of 86, this volume spends a lot more time exploring the feelings of its cast with no military action until the last quarter of the book. This break is appreciated since the last two books have been heavy on action and at this point, both the cast and we as readers need a breather. If nothing else, I think it’s important that Shin has this struggle now so that he can move forward.

Volume 6 is also the end of the current arc and as far as endings go, it’s a strong one. Everything that needs to be tied up is (except for one on-going plot point) and where we are at the end of the story (compared to where we were at the start) is a satisfying place to be. Both Lena and Shin have come a long way and they’ve learnt a lot about one another. Lena is resolved to protect the lives of her squad and Shin is dreaming of the life he wants after the war.

In particular, this book is made up of many emotional and tender moments, which I find author Asato Asato is great at writing. The interactions between the cast are never cheesy or overblown. They say what’s needed in a way befitting real people. It’s not overly emotional but just enough to draw the reader into the scene and make them care. This strength in writing combined with Asato Asato’s ability to write convincing, exciting battles is why I love 86 so much and what propels it above so many other books in the world of light novels.

Speaking of writing, something else I appreciated this time around is Viktor’s personality being toned down a bit. In Volume 5 he was presented as an eccentric, someone to be wary of and perhaps even a villain, but this time around he’s mellowed out. It’s not that his attitude has changed but as we’ve spent so much time with him, it’s clear now that Viktor is just as lost as anyone else in this world.

As I said in my last review, I think Viktor works as an interesting counterbalance to Lena since he can more readily relate to the 86 and advise her on how best to help them. This time around, he finds himself in an advisory role more than anything else and that helps present him as human to the audience and not just this untouchable genius.

86 Volume 6 comes to the West thanks to Yen Press and has been translated by Roman Lempert. As always, the translation reads well with no issues to speak of. And as always, this release includes several colour pages at the beginning, which showcase some of the mechanical designs as well as the cast enjoying themselves in the snow-covered world of the United Kingdom of Roa Gracia. Volume 7 of the series is currently scheduled for release in March.

Overall,  86 Volume 6 proves to be another memorable and interesting read. Slowly but surely, the cast is being fleshed out and developed by author Asato Asato and it’s a journey we as readers absolutely want to be a part of. If you’ve been enjoying the series so far, then this book surely won’t disappoint. 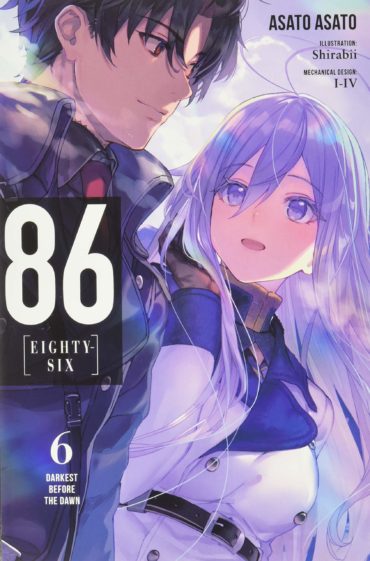