It’s fair to say that 86 has been knee-deep in quite a dramatic arc, with plenty of things starting to change for our cast. So with that in mind, it’s perhaps no surprise that for Volume 10, author Asato Asato has decided to change direction for a bit and offers us a collection of prequel side stories. Do they prove an interesting read? Let’s find out!

As mentioned above, Volume 10 is a collection of prequel stories which all focus on Shin. These tales cover our protagonist’s time before we met him back in Volume 1, showing what made him into the Headless Reaper. The book begins when Shin joins his first squadron, the Halberd Squadron led by Alice Araish. At the time Shin was a fearful child, who had trouble with those who were taller than him and kept bandages around his neck to hide the scars left behind by his brother, Rei.

Alice can’t bear to see a child as young and fragile as Shin fight against the Legion. He fights recklessly with what seems like one foot in the grave, awaiting his death. As captain, Alice feels it’s her responsibility to ensure he survives and so she begins to teach him everything he needs to know. These teachings include the fact the 86 can never be buried and that instead of making them graves, Alice and Shin must find a different way of bringing them to their final resting place. This is why Shin started keeping parts of the Juggernauts and carving the names of the deceased into them, keeping them stowed away in his Juggernaut until they could reach their final resting place.

Throughout the other chapters, we see other units Shin is assigned to and the teachings passed onto him from each one, as well as the reactions of those around him to the things he’s learnt. Not everyone agrees with Shin’s methods, particularly the fact he kills members of the squadron who are on the brink of death. There is no salvation for them either way, so Shin believes they shouldn’t be left to suffer as taught by another of his former comrades, but that doesn’t further stain his reputation.

As time goes on, we see Shin get bullied, by people who don’t believe in his powers to hear the legion or those who are scared that their squadron will be wiped out like the others he’s been a part of. As Shin interacts with more and more people, he grows even more distant, aware of the fact no one seems to live for very long at his side and that he’s always left behind.

This volume isn’t all doom and gloom though, there is happiness to be found in Shin’s stories occasionally – like how he came to meet Fido! Fido’s story is certainly one of my favourites since I become very attached to the robot through watching it come to life in the recent 86 anime adaptation.

Perhaps what I like about Volume 10 the most is that Asato has had the chance to take a step back from the overly complex storyline we’re currently in. For this book, all she’s had to write about is Shin and a small handful of characters surrounding him. The chapters are short and snappy and since we’re not in the present day there is a lot less to keep track of, which makes for a better read on the whole. This feels more in line with the quality of the earlier books than it does the last couple which had too much to do.

I think side story volumes often can feel fluffy or like needless padding, but actually in this case, these stories are all things the series has alluded to before and they fill out questions we readers have had. So they make for a more satisfying read than they otherwise could have. Asato also hints in the afterword that Shin (and presumably 86 itself) will begin to head toward its conclusion beginning in Volume 11, so this feels like a good place to have taken a break from the present day and inserted this collection.

As previously mentioned 86 Volume 10 comes to the West thanks to Yen Press and continues to be translated by Roman Lempert. The translation reads well with no issues to note. Volume 11 of the series is scheduled for a release in November, so we have quite a while to wait until we get there. Although at that point we are caught up with the Japanese releases, so it’s no real surprise the release schedule is getting longer between volumes.

Overall, 86 Volume 10 proves a nice rest-stop and answers quite a few questions many of us had about Shin’s time before joining the Spearhead Squadron. Fans of the series will appreciate this collection of short stories a great deal as we prepare to go into what’s shaping up to be the final arc of the series. 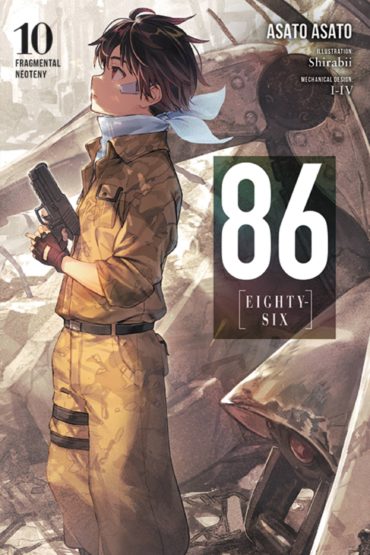