The first entry in the Bond and Book series arrived in the English market in September last year and offered book lovers a likeable collection of short stories revolving around a boy who can hear the voices of books. Now the second instalment is here and it’s time to find out if it continues to be as entertaining and charming as its initial outing.

Instead of Musubu Enoki leading the story as we saw in the first book, the protagonist this time is Minami Tsuburaya, who works at the last remaining bookstore in the town of Tohoku. One day Minami’s world is turned upside down when owner Emon Koumoto dies in an accident. Due to Emon having no living family, there is no one to carry on running the store, which means it will have to close its doors for good.

Minami has fond memories of the store from childhood and she doesn’t want to leave the place without doing something to celebrate the bookshop that brought her so much joy. So in its final week, it’s decided that the staff will celebrate Emon and the store’s life by holding an event where people can write special messages and take pictures of themselves with the treasured books they found in the shop.

One evening while preparing for the event, Minami finds Musubu Enoki in the store, ominously talking to himself and asking “who killed Minami?”. When confronted, Enoki tells Minami he was simply talking to the books, something Minami finds hard to believe. Putting that aside, she asks what he’s even doing there – to which Enoki declares that Emon left all the books in the store to him. So for the final week, Enoki will be working there part-time to get to the bottom of what happened to Emon and to make sure that, should these books have any requests, they are fulfilled.

As you might imagine, Minami isn’t thrilled about working with an oddball like Enoki who witters on about being able to converse with books. But as the week goes on and she sees him helping out the customers who come by, as well as witnessing his abilities in action, she has to admit that Enoki might not be so bad after all. He even reminds her of Emon himself, who always seemed to know what the books around him were thinking…

As you may have gathered from this write-up so far, unlike the first instalment of Bond and Book which was short stories, this entry relates one long storyline. It’s still broken up into five chapters, each one focusing on a different customer and their relationship to the bookstore and a book from there but the resolutions of each of these stories feed back into the overall plot, which is something we didn’t see before.

The other big difference is that Musubu is not the protagonist, so we don’t get to enjoy his inner monologues nor hear from the book he’s dating, Princess Yonaga. Although I’m not sure I mind that since Minami is a strong lead in her own right and it’s entertaining to see events from the perspective of someone who doesn’t want to believe Musubu has these strange abilities. Interestingly, in Japan, this book was released alongside Bond and Book: The Devotion of the “The Surgery Room” as an “extra edition” rather than being a sequel novel, which perhaps explains why Enoki isn’t in the protagonist role.

Of course, what I enjoyed most about reading this one is the fact that author Mizuki Nomura once again pours a real passion for literature and bookstores into the work. The characters in this story hold such precious memories of Emon’s store that you can’t help but feel sorry for the town losing its last bookstore and the fact the younger kids living there now won’t have the same experiences. It also made me think about my own treasured experiences in bookstores, finding a book that I would grow to love or simply enjoying the act of flipping through those that caught my interest, which just made the chapters here that much more relatable. Certainly, any bookworm is going to enjoy reading this one and reminiscing about their own experiences.

Bond and Book: The Long, Long Good-Bye of the “The Last Bookstore” comes to the West thanks to Yen Press and has been translated by Nicole Wilder. The translation reads well with no issues to report. Like the previous entry, this one has been given a hardback release, which is well worth the higher price point. While there are still more books in the series to come, Yen Press currently don’t have anything else on the schedule so we might be waiting a while for the next entry to hit Western shelves.

One other thing of note is that while Miho Takeoka is credited for illustration there actually aren’t any images in this book besides the cover and the chapter breaks (which reuse the silhouette of the cast who are on the front of the book). This might be a bit disappointing to readers who liked the variety of images in the last entry.

Overall, this entry in the Bond and Book series proves an emotional read as the cast says farewell to a beloved bookstore. Readers will undoubtedly connect with the feelings of these individuals as they reminisce on their time spent browsing or purchasing books. 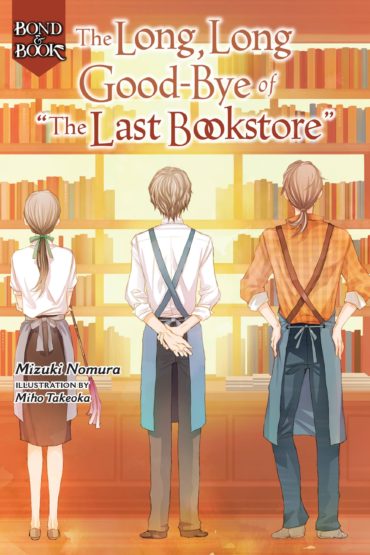 Title
Bond and Book: The Long, Long Good-Bye of "The Last Bookstore"

Bond and Book: The Devotion of “The Surgery Room” Review

Bond and Book follows the story of Musubu, a boy who can hear the voices of books and takes on their requests for help, hoping that he can bridge the gap between humanity and the literature we love.