Having won first place in the Kono Light Novel ga Sugoi! (This Light Novel is Amazing!) guidebook for 2021 and 2022, perhaps it’s no surprise that Chitose Is in the Ramune Bottle has found itself licensed by Yen Press. With Volume 1 in hand, it’s time to find out if the series is as special as the buzz around it suggests.

The story follows the protagonist Saku Chitose, who is the most popular kid at his high school and is about to start his second year. Surrounded by pretty girls and other popular students, Chitose is envied by all around him and if you go on the secret forum for the school you’ll soon find comments complaining about and name-calling Chitose.

Despite the haters, Chitose finds himself in the position of class president and teacher Kuranosuke Iwanami (nicknamed Kuro) immediately saddles him with the job of bringing a shut-in student back to class. Chitose isn’t thrilled about this and he’s even less happy when he learns the kid is Kenta Yamazaki, an otaku who, after being turned down by his romantic interest, has nothing but hatred for the world.

For the next few days, Chitose heads to Kenta’s house with a friend in tow, either Yuuko Hiiragi (who is the vice class president) or Yua Uchida, both of whom Chitose hopes will offer a friendly face and help lure out Kenta. Naturally, Kenta knows exactly who Chitose is and how he has a harem of pretty girls, which leads to the two of them getting off on the wrong foot and arguing day after day.

Kenta resents Chitose for being a popular kid who has everything in life handed to him, while Kenta is  shunned for his interest in otaku hobbies. While our protagonist doesn’t deny Kenta’s claims, he does encourage Kenta to try some lifestyle changes which will allow him to return to class with his head held high and maybe even prove himself to the girl who shot him down. Ultimately, Kenta agrees to come back to class and Chitose lets him hang out in his friend cycle while guiding him on how to interact with others and taking him out to buy new clothes on the weekend.

At this point, I’m sure the story is starting to remind you of Bottom-Tier Character Tomozaki and admittedly there are a lot of similarities here. The main difference is that instead of the story being told from the perspective of the character in need of help, we’re following the popular one who has already got it made, so to speak. On the whole, I quite liked the story surrounding Kenta, given that it’s fairly honest in showing that he can’t turn his whole life around overnight, but a few small changes make a big difference to both your self-confidence and how you’re perceived by those around you.

Honestly. for what it is, the story is interesting enough and author Hiromu is good at writing the character interactions, with snappy dialogue and a largely likeable cast of characters. Where it all falls apart for me is with our protagonist himself, who ends up being completely insufferable. He has no flaws (that we know of yet) and struts around like he’s god, constantly talking about his good looks and popularity. His interactions with Kenta range from having sympathy for him to mocking both him and his hobbies. I’m not entirely sure where Chitose stands on that by the end, since he does backtrack on some of his harsh statements, only to double down later and then backtrack again.

Right now, Chitose’s personality just comes off as rotten and there are no real repercussions for him acting this way. I was hoping he’d get his comeuppance toward the end of this first volume, but sadly that doesn’t come to fruition. He seems to have a story of his own from some snippets of information we learn, such as being an ex-member of the baseball club, but this isn’t explored enough for us to get a sense of who he was and why his personality is like this now. I would not be surprised to hear a lot of readers dropping the series at this point simply because of how frustrating Chitose is as a protagonist.

Given the series started back in 2019 and didn’t top the Kono Light Novel ga Sugoi! rankings until a year after, I’m willing to give it the benefit of the doubt and try out Volume 2. I’ve also heard somewhat more positive things from people who have read more, so I’m hoping that, like Bottom-Tier Character Tomozaki which improved drastically in Volume 2, this one will follow a similar path. That’s a lot of investment for the average reader, which is definitely a mark against the series. You really should be able to hook your readers from the first book, especially when this concept isn’t particularly original and even in the English market, there are similar and better novels the audience could be reading. The one single saving grace is that the characters who hang around Chitose are likeable; even the girls all seem to have feelings for him. It’s a shame they’re rather undeveloped in this instalment, but now Kenta’s storyline is over I’m hoping they’ll take the spotlight in the stories to come.

As previously mentioned, Chitose Is in the Ramune Bottle Volume 1 comes to the West thanks to Yen Press and has been translated by Evie Lund. The translation reads well with no issues to note. Illustrations for the series are handled by raemz, who offers a selection of images focused on the various female members of the cast. They’re suitably cutesy and fit the tone of the series well enough. The series is ongoing in Japan with seven volumes (including a 6.5 release) and Yen Press currently have Volume 2 scheduled for an English release in July.

Overall, right now Chitose Is in the Ramune Bottle is incredibly difficult to recommend to anyone. The writing is good and I like the extended cast, but Chitose is such an insufferable protagonist that I find it hard to believe anyone will be able to put up with him throughout this book. I’d certainly recommend several other series over this one, sadly. Hopefully, the next entry manages to turn things around. 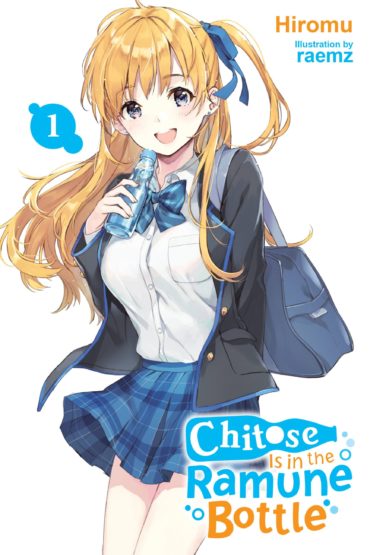 Title
Chitose Is in the Ramune Bottle Volume 1