Back in January, Yen Press released Volume 1 of The Splendid Work of a Monster Maid. The series introduced us to nekomata protagonist Sumire and the team of highly skilled maids she ends up working with. Now it’s time to find out if Volume 2 offers a similarly entertaining read as the series debut.

At the end of Volume 1, we saw the undead Rose get captured by a mad doctor the group were investigating. The doctor is obsessed with life and death, so having an undead in his hands gets him excited about the prospect of dissecting her to see how she ticks. Now it’s a race against time for Sumire and android Ivy to rescue their companion before any harm can befall her!

The nice thing about this opening chapter is that we get to see Sumire and Ivy carry out a mission without Rose to rely on, which I think is important, given in Volume 1 they were shown to be quite clumsy. It’s not that they’re unreliable since they’re both powerful in their own right, it’s just that Rose is the one who can get the best out of them. So it’s interesting to see how they work together when left to their own devices.

After the defeat of the doctor, the series resumes the largely episodic structure we saw in the first book. This includes a story about a siren the girls end up helping when going out to dinner together and a housekeeping mission that Sumire and the boss embark on together (leaving Rose and Ivy behind for maintenance).

The final chapter of the four included here is the most interesting in terms of the future of the series, since it introduces a rival group of maids who are working for the current Demon King. Having learnt about Sumire and the Cirsium Domestic Staffing Agency, they set out to investigate and put a stop to our heroes who are going around collecting the former Demon King’s magic.

Now that we have a defined group of enemies I think the episodic nature of the manga will change and perhaps we’ll get some longer storylines as friend and foe face off against one another. At least, I hope that’s the case. I’ve certainly enjoyed both volumes of The Splendid Work of a Monster Maid so far, but it’s perhaps telling that my favourite storyline is the one about the doctor which was spread across two chapters.

The other thing I appreciate about this instalment is that it managed to give us character development for both Rose and the boss. It’s a shame that didn’t also extend to Ivy, but of the main cast I think Rose and their boss are the two that hold the most secrets so it’s hard to complain too much. Their development and backstories are expertly woven into the chapters, speaking to the skill of author Yugata Tanabe who manages to cram a lot into these tales but not overwhelm the reader. The artwork, too, remains wonderful and beautifully conveys the world our cast lives in.

As previously mentioned. The Splendid Work of the Monster Maid Volume 2 comes to the West thanks to Yen Press and continues to be translated by Eleanor Summers. The translation reads well with no issues to note. As with the previous release, this one includes a colour page at the beginning. Interestingly it has been announced that the series will be ending in Japan next month, which means it’ll likely wrap up in Volume 5. This seems like a pretty good length for it, given what we’ve seen of the story so far. Yen has Volume 3 scheduled for an English release in July.

Overall, The Splendid Work of the Monster Maid Volume 2 builds on the foundations of the first entry and presents an entertaining read. With some much-needed character development given and an interesting change afoot going into Volume 3, the future of this series is bright. 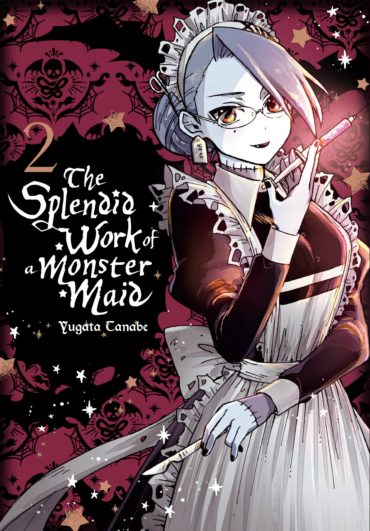 Title
The Splendid Work of a Monster Maid Volume 2

The Splendid Work of a Monster Maid Volume 1 Review

Sumire dreams of nothing except being a good maid for her mistress who took her in when she had nowhere else to go, but little does she know that the one she’s working for is secretly plotting something dastardly …

The Splendid Work of a Monster Maid Volume 3 Review

In Volume 3 of The Splendid Work of a Monster Maid, Sumire and co. find themselves working for a group of Egyptian mummies and a handsome bartender, then take a trip to an underwater resort.