Volume 2 of The Splendid Work of a Monster Maid showed us that protagonist Sumire can complete missions even when her capable teammates aren’t around and introduced us to a team of villains. With Volume 3 in hand, let’s find out what’s in store for our heroes next!

At the beginning of this instalment, we find Sumire and the others being sent on a new assignment, which sees them working for a family of Egyptian mummies. Rather than being tasked with simply cooking or cleaning like the Cirsium Domestic Staffing Agency usually is, this time they’re employed to look after the family’s young son (who remains unnamed). At first glance, it seems like a simple task but unfortunately, the young master proves to have an entitled attitude and quickly has a falling out with the group.

Thanks to Sumire being a black cat (who the mummies believe to be a reincarnation of their goddess), she manages to smooth things over and avoid the group getting fired. Now with renewed determination, they begin looking for the boss’s stolen magic but things are thrown into chaos yet again when the young master begins using it…

Other stories in this volume see the group working for a demon who gives people a drinking experience to remember in his private bar (and has his eyes set on making Rose one of his minions!), and the three take a trip to an underwater resort at the request of an old friend. It’s a nice collection with a varied selection of characters and storylines just like we’ve seen in the previous two books.

And just like in the previous two volumes, these stories are given the amount of page time necessary to get the reader invested and they all end up revolving around a different member of the Cirsium Domestic Staffing Agency, so everyone gets their turn in the spotlight. The only character we don’t see a great deal of is the boss but, given he played a significant role toward the end of Volume 2, this isn’t an issue.

The bigger problem for me is the fact that the rival maid group we met at the end of Volume 2 don’t play a big role this time around. In the end, we don’t even see them again until the end of this book! This is disappointing not only from the perspective of having introduced them in the previous release and not utilising them being a waste but also because the manga reaches its conclusion in Volume 5. There’s not a lot of time left to bring in these characters and make sure we readers care about them, particularly when it’s a group of four and not just one or two new additions to the cast.

Now that we’re a little more than halfway through, this is where The Splendid Work of a Monster Maid is beginning to show some rough edges. I’ve liked the premise since it started and mangaka Yugata Tanabe does a good job of giving us a great deal of variety in the characters and situations the trio end up in.

I’d have been happy to see that continue up until the conclusion where presumably the three and their boss will face off against the current Demon King. But throwing this enemy group in and doing nothing with them feels haphazard and throws off the otherwise nice balance the series had. Hopefully, they’ll play a bigger role in Volume 4 and can convince me that their inclusion wasn’t such a negative. Of course, if you’ve enjoyed the series so far, this isn’t a deal breaker by any means. The positives of the beautiful artwork, likeable cast and interesting stories far outweigh the minor concerns I have.

The Splendid Work of a Monster Maid Volume 3 comes to the West thanks to Yen Press and continues to be translated by Eleanor Summers with lettering by Lys Blakeslee. As always with this series, the translation reads well with no issues of note. Volume 4 of the series is currently scheduled for a release in December, so not too long to go before we can get our hands on more of this one!

Overall, The Splendid Work of a Monster Maid Volume 3 continues to offer a variety of interesting stories and characters as Sumire and the team go around reclaiming stolen magic. While the enemies introduced in Volume 2 go underutilised, that doesn’t prevent this one from continuing to be an enjoyable read. 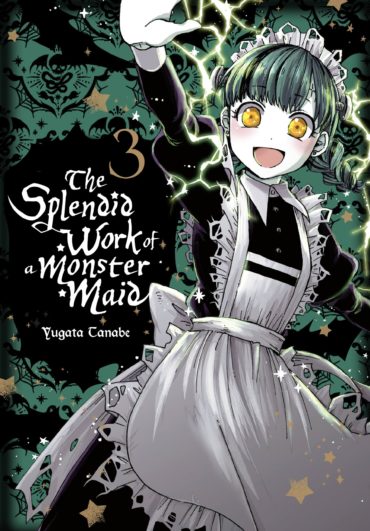 Title
The Splendid Work of a Monster Maid Volume 3

The Splendid Work of a Monster Maid Volume 1 Review

Sumire dreams of nothing except being a good maid for her mistress who took her in when she had nowhere else to go, but little does she know that the one she’s working for is secretly plotting something dastardly …

The Splendid Work of a Monster Maid Volume 2 Review

With Rose being captured, it’s up to Ivy and Sumire to save the day – but will they be able to rescue their friend before the dastardly doctor they’re investigating can experiment on her? Life as a Monster Maid is never as simple as it appears…