The villainess genre is usually coupled with an isekai storyline of characters being reincarnated in worlds they were aware of in their past life. But recently the trend has started to shift to telling villainess stories without the isekai element, which brings us to one of Yen Press’ new debuts: The Holy Grail of Eris Volume 1. Does it prove an interesting entry in the genre? Let’s find out!

The story follows Constance Grail (known as Connie to friends and family), who has just caught her fiancé Neil Bronson cheating on her with noblewoman Pamela Francis at a ball the two are attending. Worse still, Pamela manipulates one of her followers into setting Connie up to make it seem as though she’s a thief and then accuses her in front of everyone present.

The Grail family are in deep debt, thanks to Connie’s father, who is sincere and honest to a fault, often finding himself taken advantage of. Because of her father, sincerity is an important part of Connie’s beliefs. She can’t even imagine stealing from someone and finds herself about to pass out from the stress of being falsely accused. Wanting nothing more than to be saved, Connie cries out for help and her plea is heard by a ghost known as Scarlett Castiel – a woman who was executed for wicked deeds ten years ago!

Of course, Scarlett isn’t willing to help Connie out of this tricky situation without something in return. What Scarlett truly desires is revenge on those who led her to be executed and since it was only ten years ago, most of those people are still alive and happily living their lives in high society. Connie readily agrees since anything is better than the position she’s currently in, but will she come to regret this decision after the fact?

What follows is a mystery story, with Scarlett giving Connie information about her past and then sending our protagonist out to investigate. Being a ghost, Scarlett can’t do anything but hover around Connie (and sometimes possess her) so she’s completely dependent on her help. However, having lived a life of honesty, Connie is absolutely terrible at lying which often leads to her being caught out by those she’s investigating. Luckily, a love interest is introduced later in the book who helps Connie out with some of this, but he also happens to be someone Scarlett can’t stand and doesn’t trust, so that causes just as many problems as it solves for the two!

Perhaps the most interesting thing about The Holy Grail of Eris is that Connie is not a villainess; that’s definitely Scarlett. You could argue that Connie is becoming a villainess through her actions investigating those who betrayed Scarlett, but inherently she’s more of the good girl protagonist type who normally exists to doom the villainess. Having these two together from the start certainly gives us an interesting dynamic compared to other titles like this and I enjoyed watching Connie change from her interactions with Scarlett, particularly the fact she becomes far less naïve as the story goes on.

The big downside to this volume is that while it has a defined beginning, middle and endpoint I feel that the end was very flat. It wraps up without having accomplished or concluded anything of real note and hopes the reader will continue reading the further instalments. It just wasn’t a good stopping point and given this is already quite a long book at 250~ pages, that’s a negative against it for most readers unless you’re very invested in the cast. Perhaps the fault for this lies with its origins as a web novel, since I’ve seen other light novels based on web novels that similarly end unsatisfyingly volume to volume, but usually, that’s not the case in a first volume! Or it could simply be because of the fact this is Tokiwa’s first published work. Either way, it’s a shame because I like the world and characters author Kujira Tokiwa has created here, but I do worry it’s going to be a hard sell to convince more casual readers to stick it out.

One thing I did particularly like about this book is that between chapters there are character profiles for all the notable characters we’ve met so far. Not only that but these profiles get updated with information as the story goes on, so if you’ve forgotten something important or relevant, they’ll be there to give you a quick refresh.

As previously mentioned, The Holy Grail of Eris Volume 1 comes to the West thanks to Yen Press and has been translated by Winifred Bird. The translation reads well with no issues to note, but one thing I did find strange was how all of Scarlett’s dialogue was rendered in italics. It somewhat makes sense since no one but Connie can see or hear her, but it does get confusing at times when dialogue in italics is also used to show a character’s inner thoughts. To get around that Scarlett’s speech is in a slightly different font than the rest of the text, which is a workaround I appreciate but remain unconvinced.

Illustrations for the series have been handled by Yu-Nagi (who has many credits to their name in Japanese but nothing else in English) and I appreciate that one of their colour pages shows off all of the main characters. There is also a two-page spread for a particularly dramatic moment.

The series is up to four volumes in Japan and Yen Press currently have Volume 2 scheduled for a release in July. It looks as if the main story ended in Volume 3 with the fourth book being an extra of some kind, so that may well be the end unless it set something new up.

Overall, Volume 1 of The Holy Grail of Eris proves an entertaining but flawed read that puts a spin on a popular genre. As long as you’re prepared to stick with it I think you’ll enjoy what the story has to offer, but that’s a commitment that not everyone will be prepared to take on. In which case, you might be better off waiting until it’s all available in English and someone can speak as to whether the series continues to be as fun as this first outing. 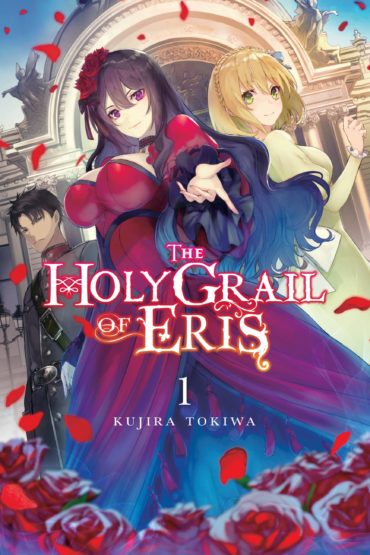 Title
The Holy Grail of Eris