Author Yoru Sumino is perhaps still best known for their bestselling hit I Want to Eat Your Pancreas, but Seven Seas have been working on bringing the author’s extensive catalogue to the West. The latest to make it over is I am Blue, in Pain, and Fragile which I’m here to take a look at today!

The story follows Kaede Tabata who is a first year in university and mostly keeps to himself. One day he meets Akiyoshi Hisano, an outspoken and idealistic young woman who approaches Tabata over and over, eventually becoming friends with him, despite his efforts to stay away from her. Together the two establish a “secret society” called Moai, which Akiyoshi hopes to use to make the world a better place by doing voluntary work and so on.

But instead of following Kaede and Akiyoshi as they develop their club, we fast forward to Kaede’s final year of university where he’s no longer a part of Moai nor friends with Akiyoshi. Something in the past caused a falling out and on top of that, Kaede is frustrated by the direction Moai has taken as a club. Before leaving university, he sets himself the goal of destroying Moai as it currently stands, but is that the right thing to do?

Like other works by Yoru Sumino, this book is a tale of growing up and the fragility of relationships. As readers, we’re kept in the dark about what exactly went down between Kaede and Akiyoshi, but as the story goes on, the answer slowly unfolds as we swap back and forth between the past and the present day.

I quite like the mystery angle Sumino chose with this one because not only do we not know why the two main characters are no longer friends, but we also don’t know if what Kaede is doing is right or not. To start with, it seems like he’s justified in wanting to destroy Moai, but that certainty becomes more muddled as the story goes on. It’s an interesting way of having the story play out and reminiscent of Sumino’s I Had That Same Dream Again, which also held its secrets close to its chest until the end.

So it’s a solid story, but it’s where the cast is concerned that things begin to fall apart. Akiyoshi is fine, largely because we don’t see that much of her, but having Kaede as our protagonist is often frustrating. He lives his life refusing to get close to others (besides Akiyoshi) for fear of saying something that will hurt their feelings and that has left him lonely and bitter.

It’s not difficult to imagine that his personality led to the falling out with Akiyoshi and honestly it’s hard to feel sorry for him, should that be the reasoning. Over and over again, he has opportunities to cultivate friendships and to grow as a person, especially while a part of Moai, but he never does and it’s hard to cheer for him as a reader while that’s the case. Kaede being this way is one of the reasons the story works so well since it leads to our uncertainty toward his actions against Moai but I wish he could have been a little more likeable.

In fact, this certainly has the least likeable cast of any of Sumino’s books so far, but on the flipside, it’s one of the more interesting storylines, especially compared to I Have a Secret, which was the previous one to hit the English market. I also appreciate that, just like I Want to Eat Your Pancreas, this one doesn’t have any supernatural elements to it, which I think works to its benefit since it’s more of a character drama that readers may be able to find relatable, while the supernatural stories can be a little too whimsical for that.

As previously mentioned I am Blue, in Pain, and Fragile comes to the West thanks to Seven Seas and has been translated by Diana Taylor. The translation seems fine on the whole, but I found the prose was quite stiff in places and some sentences just don’t make sense. Taylor has worked on the majority of Sumino’s novels, so I’m not sure what went wrong here compared to some of the others which read better (poor editing perhaps?). The next book being released in English from the author is I Will Forget This Feeling Someday, due for release in September.

If you liked this book or like the premise but don’t want to read a novel, then it’s worth knowing that I am Blue, in Pain, and Fragile has a live-action movie adaptation which is available in English on Netflix.

Overall, I am Blue, in Pain, and Fragile proves another interesting novel by popular author Yoru Sumino. While readers may find themselves frustrated by the protagonist, I’d still recommend checking it out, since the story is sure to keep you guessing until the end. 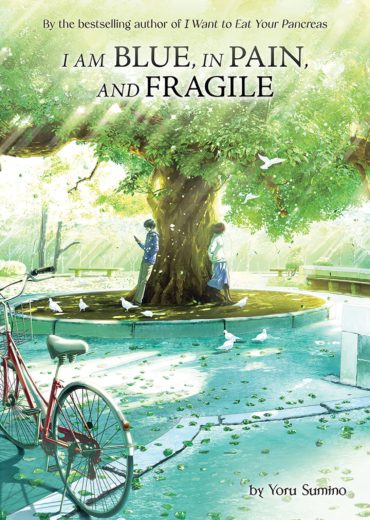 Title
I am Blue, in Pain, and Fragile