If you’re a regular here at Anime UK News then you’ll be familiar with our love for the works of Yoru Sumino. From I Want to Eat Your Pancreas to I Had That Same Dream Again, the author is known for thought-provoking and emotional journeys that are easy to become invested in. Today I’m here to take a look at I Have a Secret, Sumino’s latest work to make it into English and find out if it’s a must-have!

The story follows five high-school students who are on the cusp of graduating and figuring out where they want to take their lives. These five are called Miki, Zuka, Elle, Kyou and Looney and they’re all friends and, unbeknownst to one another, harbour special powers that allow them to see the feelings of those around them.

For Kyou, their power means that they can see punctuation marks floating over the heads of those around him. Whereas for Miki, it takes the form of a balance board that slopes gently, depending on the feeling. Then there is Looney who can see the heartbeat of those around her. And that’s to name just three of these powers.

The one thing they all have in common is that these powers mean that the cast can grasp small changes in another’s feelings, something that would normally go unnoticed. These small indicators also mean that they naturally end up with more concerns and worries about their friends than the average high-schooler. Especially once romantic feelings are thrown into the mix!

This novel is split into five chapters, each one from the perspective of one of the five characters. One of my favourite entries is Looney’s, which takes place during a school trip when she’s trying to work out if Zuka is going to use this time to confess his feelings to a fellow classmate. She watches the heartbeats of those around her for clues, but Zuka’s is frustratingly stable and never changes, no matter what happens.

What’s interesting here is that Looney is both using her power for answers, but also being let down by it when it comes to Zuka. This leaves her with more worries than the average maiden in love, but she also has no easier solution than anyone else would in her position. This is the one aspect of these abilities I came to like from the story. They may throw the cast into a variety of dramas, but they never lead to a solution that the characters couldn’t have come to on their own.

Having said all that, I did often struggle to muster up the enthusiasm to keep reading I Have a Secret. Where I would normally devour a Sumino novel, this one was underwhelming. Maybe it’s because we don’t spend that much time with the cast or simply that there wasn’t a lot of direction for the story. We’re getting glimpses into the lives of these teenagers, but their stories don’t particularly sync up for a bigger picture or lead to a satisfying conclusion.

It probably doesn’t help that I expected a lot more from Sumino as an author. Her other books are incredibly gripping, even if they’re sometimes flawed, but this one isn’t anything special. The characters are all interesting enough but again not having one main protagonist makes it hard to grow attached. I think I would have preferred it if the final chapter had tied them all together in some way and admittedly it does try to, but it just doesn’t work for me.

While Sumino has some good ideas, they aren’t executed well enough. The concept of these special powers is neat but they go unexplained for the whole book, leaving me wondering if they truly existed or if they were figments of the characters’ imaginations. The cast never once discusses it among themselves either, so I never worked out if it was just these five with powers or everyone in the school. Oversights like this are ultimately what takes away from the whole thing for me.

I Have a Secret comes to the West thanks to Seven Seas Entertainment and has been translated by Molly Lee. The translation reads well with no issues to mention. This is the last of Yoru Sumino’s novels that Seven Seas have licensed currently, but given their general success, I’d be surprised if more weren’t brought to the English market before long.

Overall, this is the weakest of Yoru Sumino’s works so far. The concept has potential but Sumino doesn’t follow through on that, which leaves a lacklustre book that’s difficult to recommend, even to avid fans of the author. 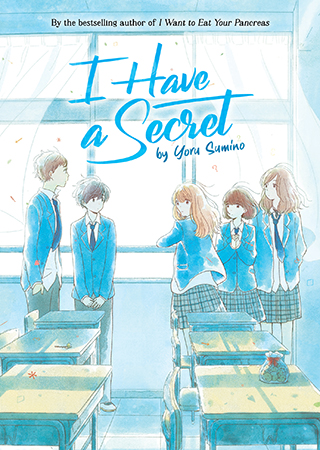 Title
I Have a Secret

I am Blue, in Pain, and Fragile Review

Seven Seas bring Yoru Sumino’s I am Blue, In Pain, and Fragile to the West. This novel shows us how easily people can grow apart and how fragile human relationships truly are.