Back in May, I reviewed Yoru Sumino’s At Night, I Become a Monster which was the first of the author’s works to make it into English after the success of I Want to Eat Your Pancreas. Now I’m back to check out her third novel to make it to the Western market, I Had That Same Dream Again. Does it offer another thought-provoking read? Let’s find out!

The story follows grade-schooler Nanoka Koyanagi, who has been tasked with defining what happiness means to her for a school project. Initially, Nanoka isn’t sure how to answer and asks her friends for advice.

Nanoka’s friends are high school student Minami, a lady known as ‘Skank’, and an elderly woman known simply as ‘Granny’. Every day after school, Nanoka and a cat known as Miss Bobtail set out to visit these people and spend time with them. As she learns about the lives they’ve lived, she begins to grasp what happiness is, but will she figure it out in time for her report?

Each of Nanoka’s friends has an interesting backstory to tell. Minami is an unhappy teenager, who lost her parents in an accident and self-harms to feel something. She’s all but given up before meeting Nanoka, but their unlikely friendship begins to change her feelings on life.

Skank spends her days sleeping until Nanoka visits. While she doesn’t tell our young protagonist the specifics of her job, she insinuates that she works as a prostitute at night. She lives on her own and is ostracised by society. No one knows her, no one cares about her (except Nanoka), but she’s cheerful despite it all and enjoys her talks with Nanoka.

In contrast to the others, Granny lives a much happier life. She owns a nice house and enjoys baking treats for when Nanoka comes to visit. Like Minami and Skank, she doesn’t seem to have any loved ones nearby, but this doesn’t bother her too much. She’s lived a fulfilled and happy life.

Like At Night, I Become a Monster or I Want to Eat Your Pancreas this book is a thought-provoking read. It starts as a light-hearted tale, one that just wants to gently nudge the reader into considering what happiness is. As the story goes on, things begin to unravel and you realise there are much bigger issues at stake.

When I was halfway through, I started to notice a pattern between the protagonist and the other characters. It was an eureka moment where I felt like I had figured it all out and thankfully the book delivered on that by the end.

One of my complaints about At Night, I Become a Monster was the fact it wasn’t going to reveal a lot of information about why things were unfolding the way they were, but that’s thankfully not the case here. Author Yoru Sumino sets the story up well and slowly drops hints to bring the reader to the correct conclusion. It’s incredibly well written and difficult to put down!

Perhaps the one sticking point readers will have is with Nanoka herself. While she’s a goodhearted and likeable protagonist, she’s also a know-it-all. She’s not too dissimilar to the main character in Tomihiko Morimi’s Penguin Highway, so if you’ve read or watched that then you’ll understand if I Had That Same Dream Again is for you – or not. Admittedly, that grade scholar charm of wanting to grow older to better understand the world and equally thinking you know everything is something I find endearing, but it’s certainly not for everyone.

On the whole, I think this is probably Sumino’s best book so far (at least available in English). It’s not obvious how it’s going to end, it gives you just enough information to naturally figure out the mystery and it’s charming. Although I love the other novels, this one gripped me in a way they didn’t. If you’re a newcomer to the author’s works then I think this is a perfect starting point, unless you want a romance, in which case, pick up I Want to Eat Your Pancreas!

I Had That Same Dream Again comes to the West thanks to Seven Seas and has been translated by Diana Taylor (who also translated At Night, I Become a Monster). The translation reads well with no issues to note. Like Seven Seas’ releases of Yoru Sumino’s other books, this release is one of their bigger novel formats and it fits nicely alongside them.

Overall, I Had That Same Dream Again proves to be a must-read for fans of Yoru Sumino’s work. With an intriguing cast of characters and a surprising connection between them, the book is a compelling read from start to finish. 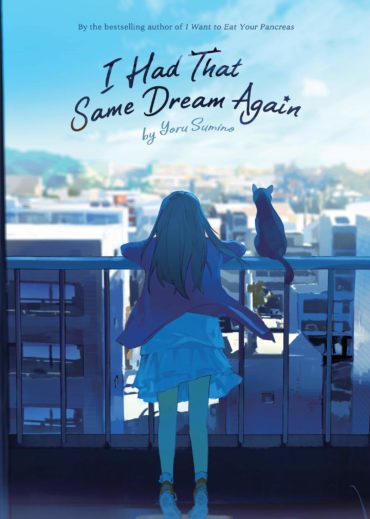 Title
I Had That Same Dream Again

I am Blue, in Pain, and Fragile Review

Seven Seas bring Yoru Sumino’s I am Blue, In Pain, and Fragile to the West. This novel shows us how easily people can grow apart and how fragile human relationships truly are.