Since I last reviewed a volume of The Executioner and Her Way of Life, the anime adaptation has been and gone. After an excellent anime, I continue to be quite excited about the story’s future, so with Volume 4 in hand, let’s find out if it lives up to my expectations.

Toward the end of Volume 3, Akari finally came clean to Momo about everything: the fact she’s been looping her time since being summoned to this world, that she suppresses her memories so Menou doesn’t find out and most importantly the fact that if she doesn’t change the future, Menou will be killed by her mentor Flare.

Momo is horrified by what Akari tells her and she certainly doesn’t want Menou to be in danger, so she decides to take things into her own hands and runs away with Akari, which is one of the biggest changes in the time loop so far. The two make for a secluded village where they hope they can lie low and form a plan before Menou catches up, but little do they know that Pandemonium (the Human Error we met in Volume 2) is also in town and forming a dangerous plan…

So with the cast split apart, we spend half our time with bickering duo Momo and Akari, while Menou teams up with Warrior Princess Ashuna, who figures having Menou owe her will work to her advantage in the future. The segments with Menou are largely comedic as Ashuna puts her into a butler uniform (which suits her well!) and gets her to play the role of a servant until the two reach the village Momo and Akari have run off to.

Yes, this time around, the focus is definitely on Akari and Momo who are treated to ample character development. The two fight non-stop because Momo thinks Akari keeps all of Menou’s affection for herself and Akari hates Momo from previous loops where she didn’t believe and wouldn’t help Akari if she came clean about her past. But because they both love Menou, they reluctantly put their differences aside in the hopes of protecting her from dying a needless death.

As a reader, it’s great to see these two characters interacting since up until the end of Volume 3, the two had never spoken because of Momo being the secret support for Menou. The two have plenty in common when it comes to their personalities as well, both stubborn and wanting to have the final say but underneath it all, they’re kinder than you’d believe. Akari even opens up to Momo about how she doesn’t want to die and she doesn’t want to be killed by someone she dislikes (like Momo), but for Menou’s sake, Akari is prepared to die. These are things you’d never find Akari saying to Menou for fear of her deciding not to go through with putting an end to her life, so I’m glad she’s had this chance to open up to someone else. Especially given we don’t often see Akari when she has all her memories of past loops as she suppresses them around Menou.

Having said all of this, outside of the character development it doesn’t feel as if this book achieves that much. In a lot of ways, it feels like a stopgap until Volume 5 when things are sure to kick off in a big way. This isn’t a bad thing per se, but it is hard to shake the feeling that nothing notable happens until the end  because so much time has been spent on Menou catching up to Momo and Akari as well as what they were up to in the village (which wasn’t a lot, really). I probably wouldn’t feel as dissatisfied if it wasn’t for the fact that Volume 3 felt like a distraction from the main plot, so having Volume 4 get back on track but not accomplish a whole lot just isn’t helpful. Hopefully, Volume 5 will clear up these feelings at last!

The Executioner and Her Way of Life Volume 4 comes to the West thanks to Yen Press and continues to be translated by Jenny Mckeon and has no issues to note. As usual, this release includes colour pages at the beginning which depict our main cast, although I feel like it was a missed opportunity not to have a colour version of the illustration of Menou in the butler uniform. Volume 5 is scheduled for an English release in September.

Overall, Volume 4 of The Executioner and Her Way of Life is an improvement on Volume 3 and gets the plot back on track. We might be taking some stopgaps along the way, but it’s clear that we’re fast approaching the turning point for Akari’s looping and the moment when we’ll find out if her actions are having any impact at all on what fate has in store for the cast. 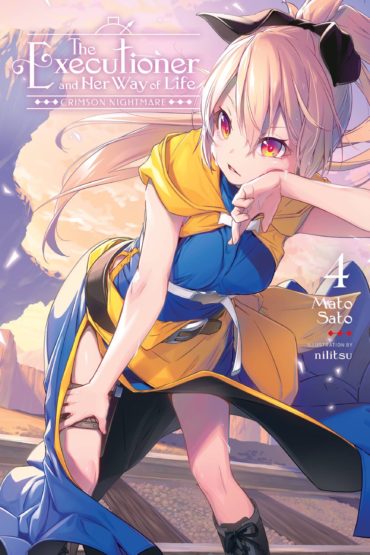 Title
The Executioner and Her Way of Life Volume 4: Crimson Nightmare