Over the summer we were introduced to Volume 1 of The Executioner and Her Way of Life, which impressed with its unique spin on the isekai genre – but has the novelty worn off with a second instalment? Let’s find out!

With Executioner Menou having failed to kill her target in Volume 1, we reunite with her and Akari (the Otherworlder she needs to kill) as they travel toward Libelle, a city by the sea. Here Menou is hoping to gather some clues as to how to kill Akari, but what awaits the two in this seemingly peaceful town is a danger they never expected.

The city of Libelle is surrounded by the sea, but on top of the sea rests a thick layer of fog where one of the Four Major Human Errors is sealed. Anyone who goes into the fog is destined to never return and this leads Menou to contemplate sending Akari into it. What neither of them realises is that the Major Human Error sealed within is starting to escape and the trouble they intend on causing will completely wipe out this city, if not leave an irreparable mark on the world if they aren’t stopped. So the pair (along with apprentice Executioner Momo who continues to follow in the shadows) find themselves in yet another troubling situation.

A major difference between Volume 1 and this instalment is the fact we’ve learnt that Akari is actively reversing time to prevent Menou’s death in the future. When she’s with Menou, Akari has sealed her memories of the time travel away, but when she’s alone or the two find themselves in trouble, Akari allows the memories to return so she can make sure things go according to her plan.

The interesting thing in this instance is that things in Libelle are diverting away from how they usually go and this concerns Akari more than anything else. If she hopes to protect Menou then she needs history to repeat until a particular point and her knowledge of the future is only helpful if things continue the way they’re supposed to.

Another notable thing we learn in Volume 2 is that Akari has reversed time so much that she now no longer has any memories of her time living in Japan. If this continues, she’ll surely begin to lose her memories of first coming into this world and on top of that, we know the Four Major Human Errors became a problem because they overused their powers and lost their sense of self, which certainly feels like this series is already foreshadowing for Akari!

Because we know more about Akari’s situation now, it means the series’ time can be split between her and Menou, which I think works out well. There are a lot of things happening in the story between the present and the future Akari has seen play out, but author Mato Sato does well to balance the two and keep them easy to follow and be invested in.

I do wonder, however, how long Sato plans to have the series run for, as the fact we’ve seen the timeline already begin to split is something I wasn’t expecting. Does that mean we will get to where Menou dies and see a significant twist? I’m not sure, but it’s a possibility that is fascinating to think about and I find myself eager to find out what the author has in store for us.

The Executioner and Her Way of Life Volume 2 comes to the West thanks to Yen Press and continues to be translated by Jenny Mckeon. The translation reads well with no issues to note. Volume 3 is currently scheduled for release in November and the anime adaptation has been scheduled to air in 2022, so we won’t be waiting too long to see the series animated!

Overall, The Executioner and Her Way of Life Volume 2 continues to offer an interesting spin on the isekai genre as well as building on the mysteries it presented in the first book. If you like the premise and characters then you certainly won’t be disappointed with this instalment. 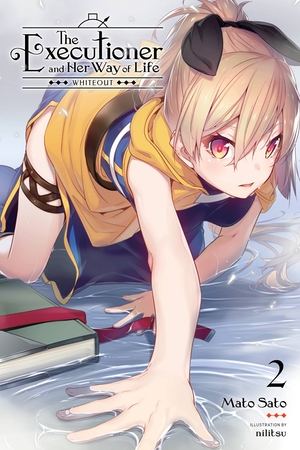 Title
The Executioner and Her Way of Life Volume 2: Whiteout

The Executioner and Her Way of Life Volume 4 Review

Akari has finally come clean to Momo about everything that’s happened to her and together the two decide to run away somewhere Menou (hopefully) won’t find them. Is this enough to alter the dastardly fate in store for the Executioner or is this a feeble attempt to revolt against the future?