You may have noticed that MVM have been bringing back some older titles recently, and while shows like Kanon and Air are by no means lost and forgotten, I would not blame you if you hadn’t heard of Venus Versus Virus before. Adapted from Atsushi Suzumi’s manga and originally broadcast in Japan in 2007, the series was licensed by ADV Films then transferred over to Funimation as the company fell into financial difficulties towards the end of the decade. Now this supernatural thriller has been rescued by MVM for a UK release, we can finally see what it has to offer. 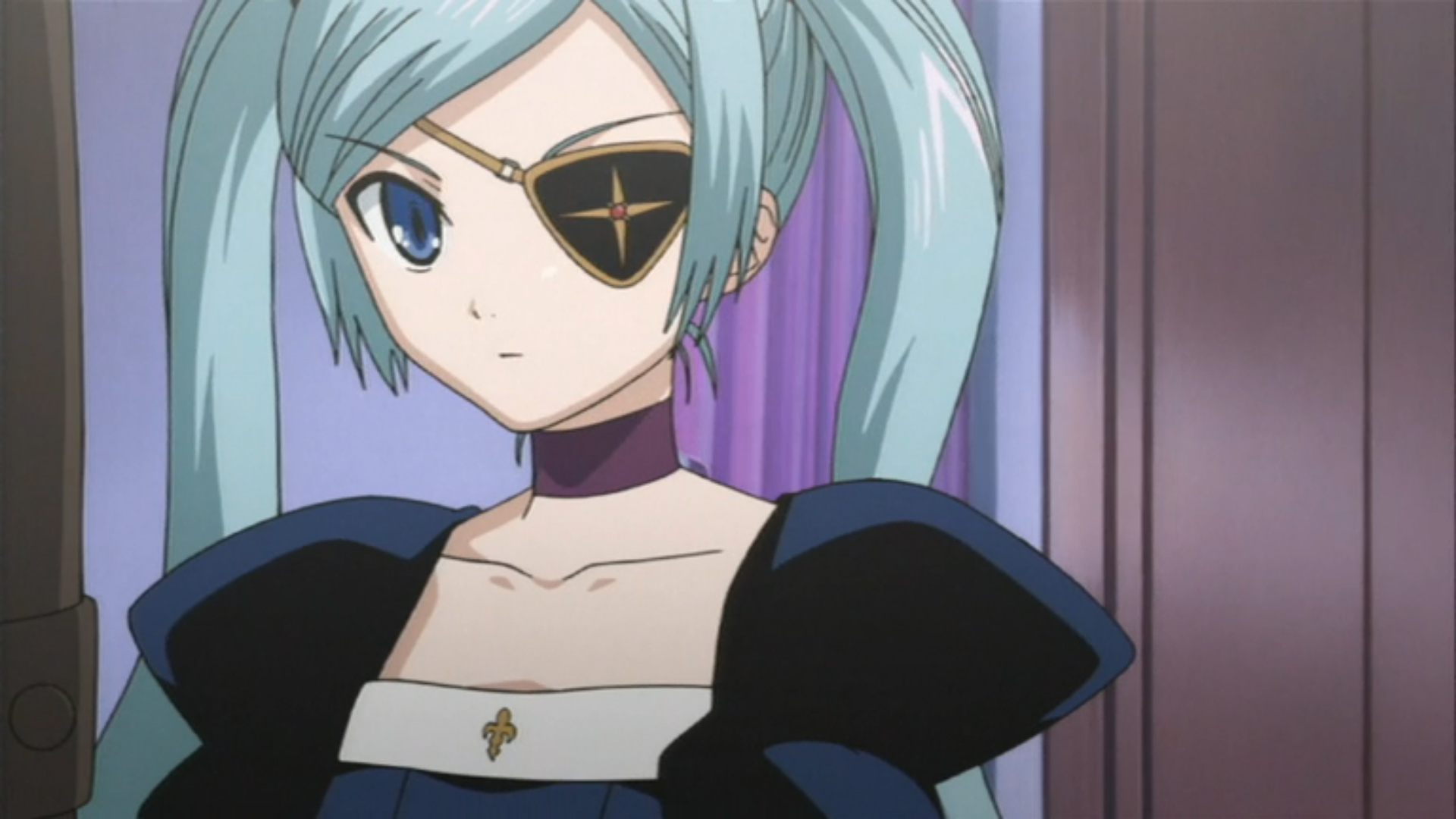 The story follows Sumire Takahana, a ditzy and unassuming schoolgirl who works at a local store called Venus Vanguard selling antiques and second-hand clothing. The store however is just a front, as Venus Vanguard is actually a secret organisation whose main purpose is to hunt down and kill demonic creatures known as Viruses. While most humans can’t see them, Viruses are still incredibly dangerous as they hunt down humans who can, and consume their souls, turning them into a Virus as a result. Having gained the ability to see Viruses after a certain incident, along with a supernatural power that allows her to fight them, Sumire is brought into Venus Vanguard by senior member Lucia, alongside a mysterious chocolate-loving young girl called Laura who develops the group’s weapons, and an old gentleman and researcher called Soichiro Nahashi, to fight and eliminate the Viruses that plague the world. 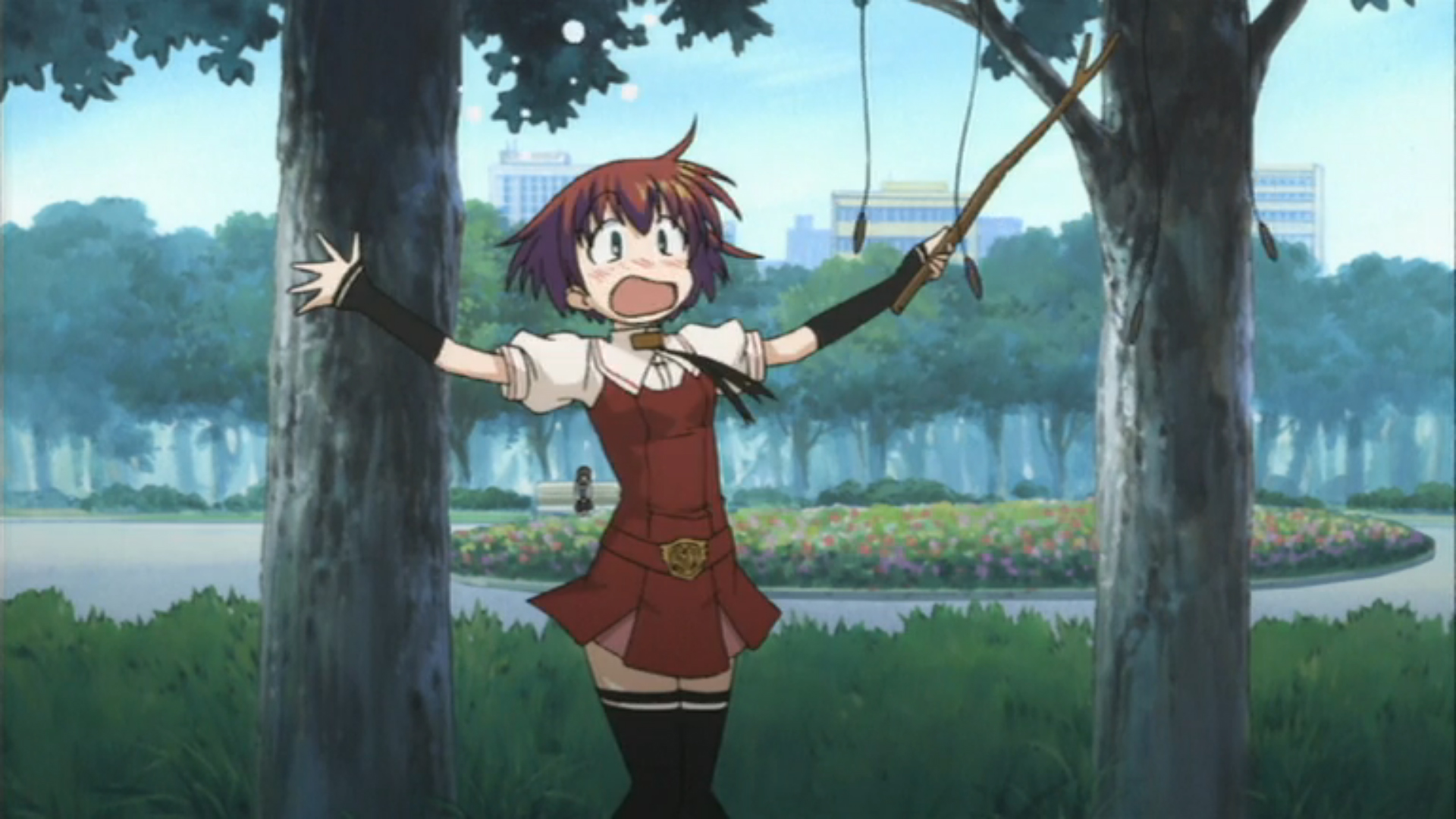 If you were an avid anime watcher in the mid-2000s or maybe just getting into anime like I was, then Venus Versus Virus will probably give you some nostalgic feelings as it definitely feels very much of that era, following the same edgy gothic styling and atmosphere that had been popularised at the time by series like Death Note and D. Gray-man, while adopting the chuunibyou “sealed powerful eye” trope in a time when it was still treated seriously rather than being made fun of. While this series isn’t in the same league as those shonen favourites, I quite enjoyed going through it as it offers some cheesy good fun, pairing tense fights against horror movie-esque demons with a surprisingly interesting storyline that surrounds its cast of mysterious characters.

These two different focus points for the series largely split it into two halves, the first focusing more on the action in a monster-of-the-week format that shows Lucia and Sumire investigating a variety of Virus-related incidents and taking the demons down, while the second turns its eye towards where the Viruses are coming from and the mysteries that surround each of the different characters. Both sides have a lot of interesting aspects to dig into, but I kind of preferred the first half, as you really get to see the effects of the Viruses on the people they hunt down, while it pairs aspects of the horror genre well with some tragic stories, with the likes of Episode 3 emerging as one of the series’ high points. 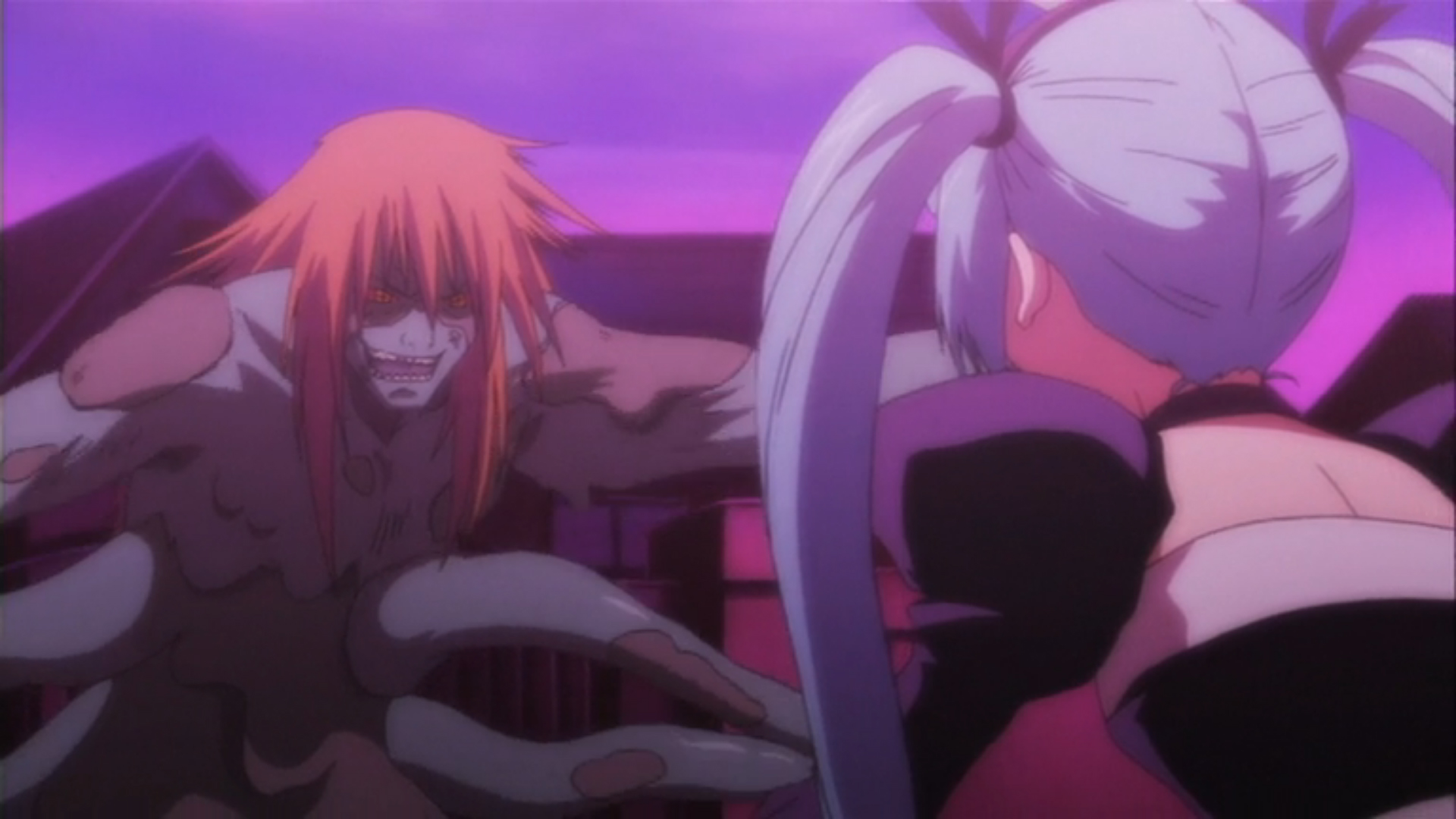 The second half, on the other hand, does a great job of putting across a mystery and a drip-feed of slow reveals, but at the same time it can be a bit too slow, at times losing the focus in its storytelling. There’s a romantic subplot that it gets bogged down with and it even veers more towards slice-of-life territory at one point, and while both do have a part to play in the end, I don’t think it needed to spend so much time on them. As such, it often feels like a mishmash of different genres; action, horror, thriller, romance, drama, and comedy; and while you’d think putting all of these into a melting pot shouldn’t really work, the series manages to tie them all in with some decent character writing that makes you want to follow along and see where everyone ends up in the end.

It’s just a shame that the end is very inconclusive and left up to the viewer’s own interpretation, as while I don’t think it’s that bad as the main plot does get wrapped up, it is a little frustrating that it ends on a big cliff-hanger that will never be resolved. The way the villains are handled in the second half is also unconvincing, with one character seemingly being important but not really contributing anything, while the main villain just pops up out of nowhere. 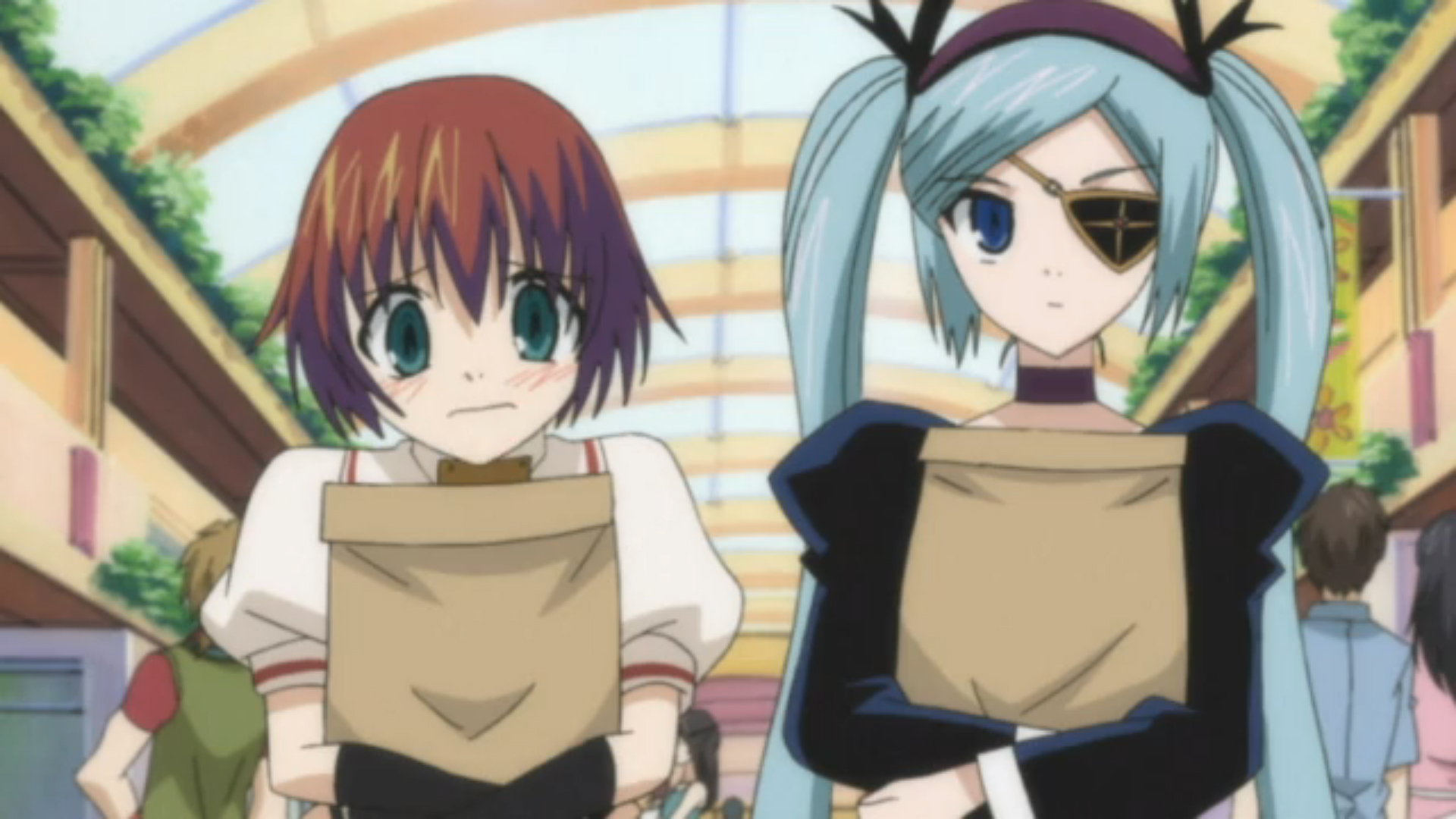 The rest of the character development however is executed quite nicely, and while the character backstories are established very early on, it’s careful in not showing you the full picture until later in the series. I liked how it kept a lot of its cards close to its chest, which kept me guessing at what the real motivations of each character were. Some of it feels very predictable and easy to work out, yet stuff that I thought I had figured out either had a twist or was a bit wide of the mark, so there were still plenty of surprises in there.

In terms of how the characters come across though, Lucia is probably the most interesting of the bunch as she is so enigmatic and is often in full-on tsundere mode and hides a lot of her true feelings. I also love her character design, and she pulls off the chuunibyou look very well. Sumire on the other hand is a lot more transparent and a lot easier to work out but is still fun to watch If you like airheaded characters. Her supernatural powers also give her an extra dimension to work with. I also enjoyed watching the twins Laura and Layla and how they are separated on the two sides of the main conflict. However, I must also give a massive round of applause to Riku, the younger boy, who keeps up his running gag of trying to ask Sumire out on a date to the movies for the entire series. 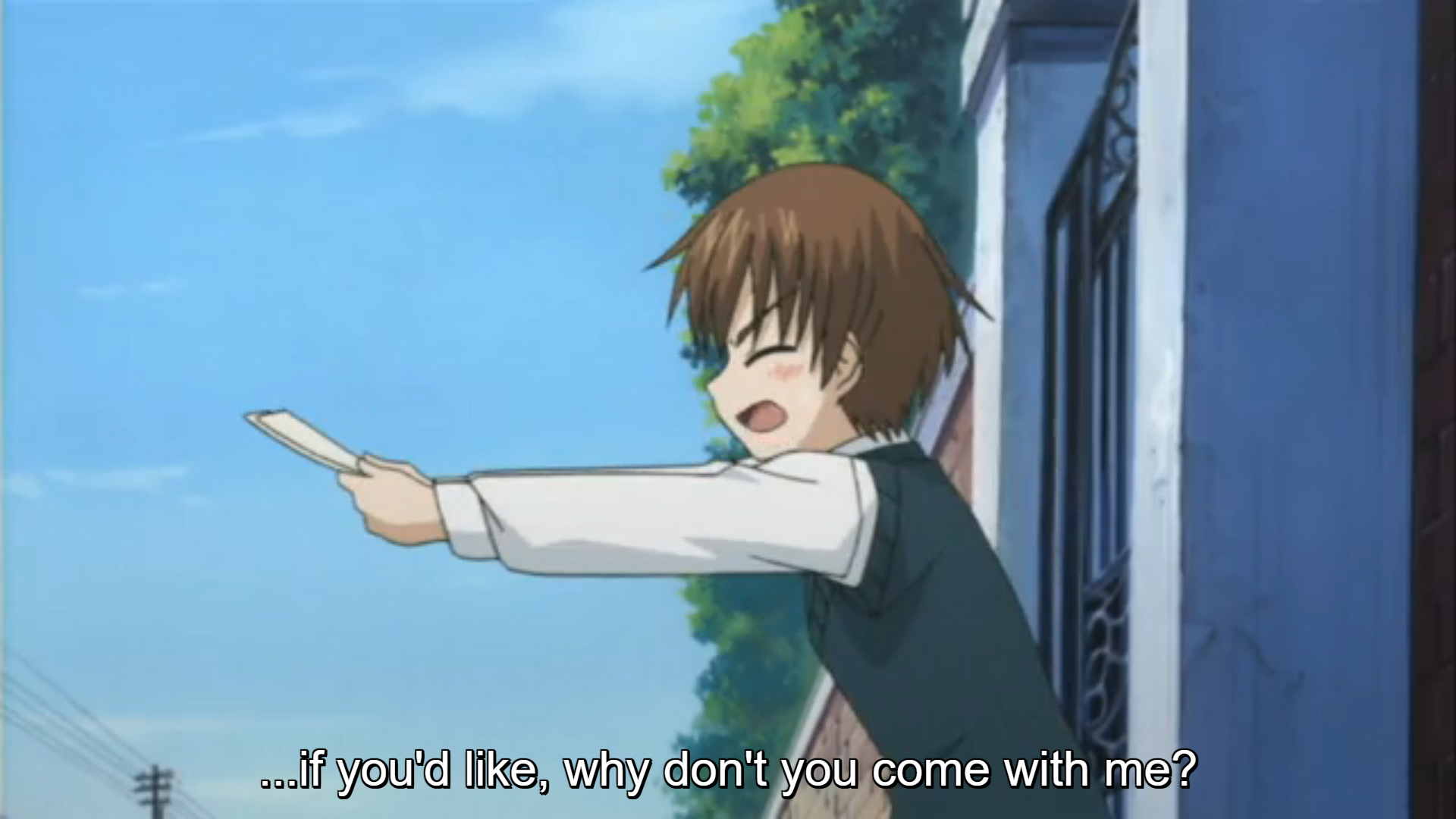 The series is animated by Studio Hibari (you may be more familiar these days with their subsidiary, Lerche) and directed by Shinichiro Kimura (seen more recently as a storyboard artist and episode director on shows like Asobi Asobase and Radiant). Considering both its age and the fact that this is a DVD release, I thought the series looked pretty good with some impactful and well animated action scenes. I’ve already mentioned the strong character designs and gothic aesthetics which I liked, but there’s also good work on settings and backgrounds and a lot of small details to be appreciated, like how the magical markings on some characters change depending on the elemental type of their attack, and how the number of roses in the vase in Venus Vanguard HQ changes over time to reflect the progression of the story. One thing that did seem odd was the increased speed of some of the animation; I’m not sure if it was just because of the faster NTSC frame rate or if it was an intentional effect. Several cuts of trains zooming past above the shop are frequently used to transition between scenes and these always caught me off-guard for how fast they looked.

The series’ soundtrack, composed by Hikaru Nanase, has a distinct 80s horror movie vibe, and works well when the series is trying to be creepy, but this does get lost in that genre muddle in the second half. The opening theme, “Bravin’ Bad Brew” by Riryka is a strong, rocky J-Pop number, while it’s no surprise gothic rock band Yousei Teikoku provides the ending theme, “Shijun no Zankoku” as their image is a perfect fit for the series’ gothic aesthetic. 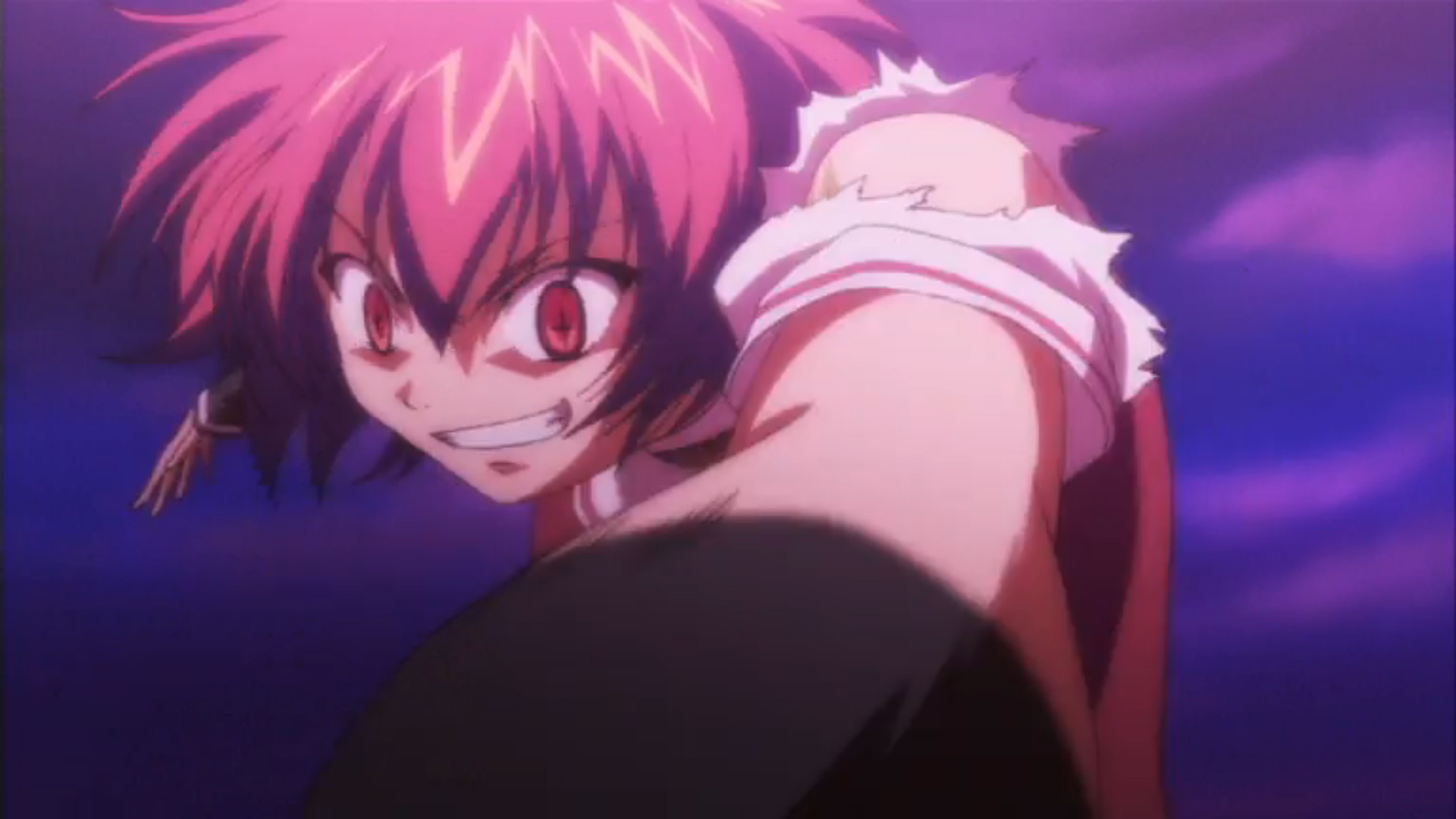 Venus Versus Virus is brought to the UK via MVM, featuring all 12 episodes in both subtitled Japanese and the English dub. Both language options sound great and feature top talent quite early on in their careers which is certainly interesting to go back to. Ayahi Takagaki (Chris in Symphogear and Lizbeth in Sword Art Online) puts in a solid performance as Lucia, while we have Chihara Minori in a very shrill and girly role, playing Sumire, which would have been quite different from voicing the very monotone Nagato in Haruhi. The English dub meanwhile features Joanne Bosanno (Aisha in Is It Wrong to Try to Pick Up Girls in a Dungeon? and Rei in Revue Starlight) and John Swasey (All For One in My Hero Academia). The only extras of note are the clean opening and ending animations. 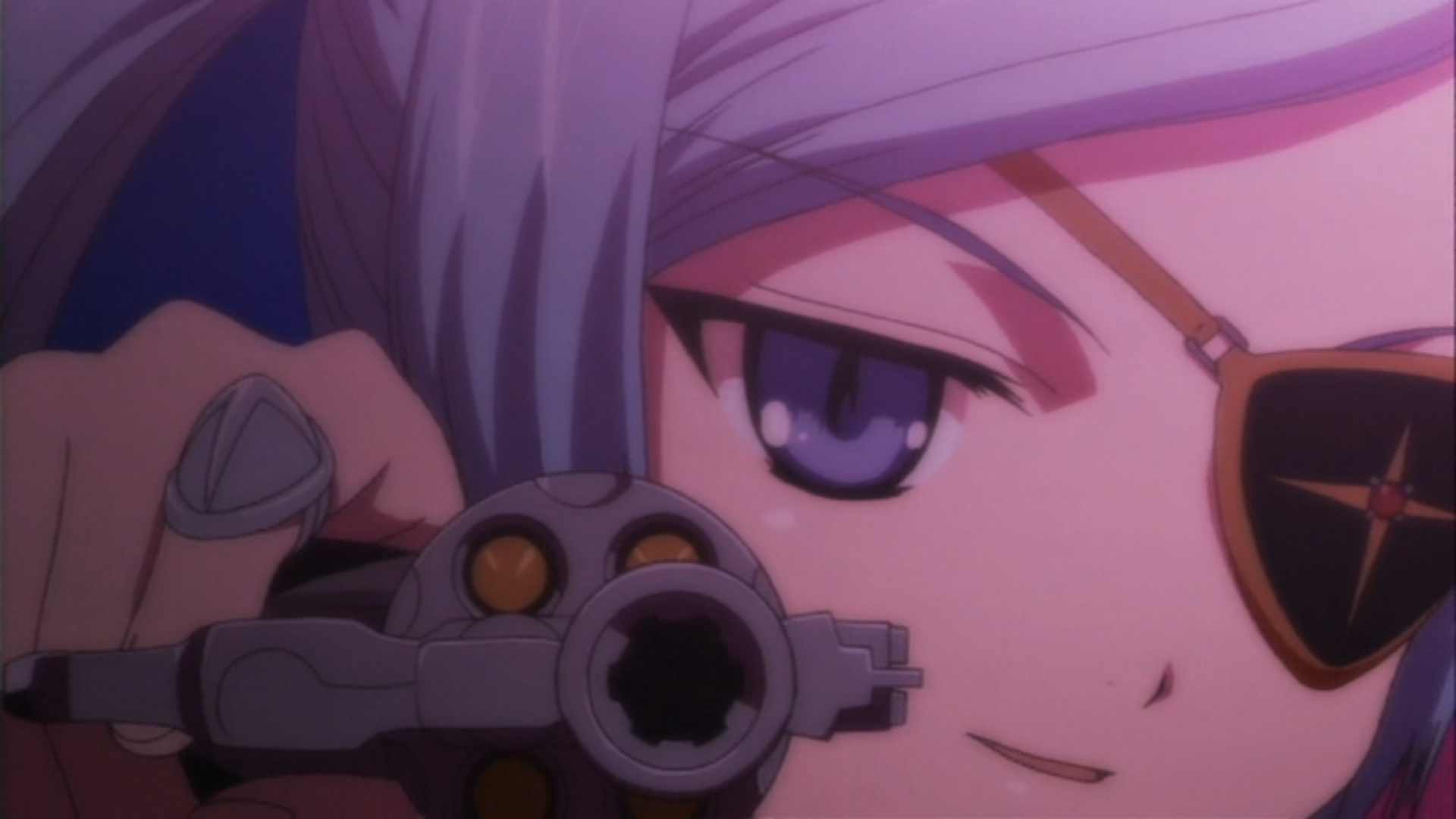 Overall, Venus Versus Virus is a surprisingly decent mix of a quirky action-focused thriller, offering some cheesy good fun with solid fight scenes and an intriguing mystery surrounding its engaging cast of characters. While its noughties gothic-inspired aesthetics may not resonate with younger viewers and its confusing genre muddle and unsatisfying ending hold it back, anyone looking for a forgotten throwback will have a good time with this one. 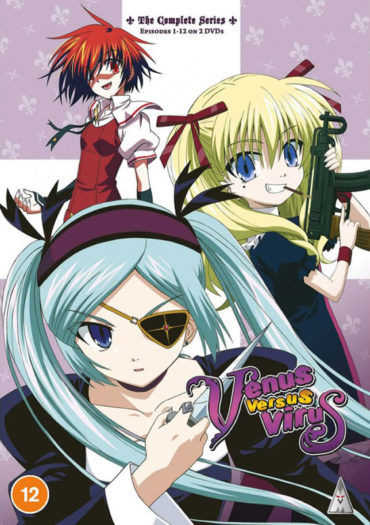 Release the Spyce offers a highly enjoyable espionage romp with bombastic execution, focusing on a group of high school girls who operate as secret agents in the organisation Tsukikage, as they fight to protect the city of Sorasaki from the evil organisation Moryo and stop its attempts to take over the world.